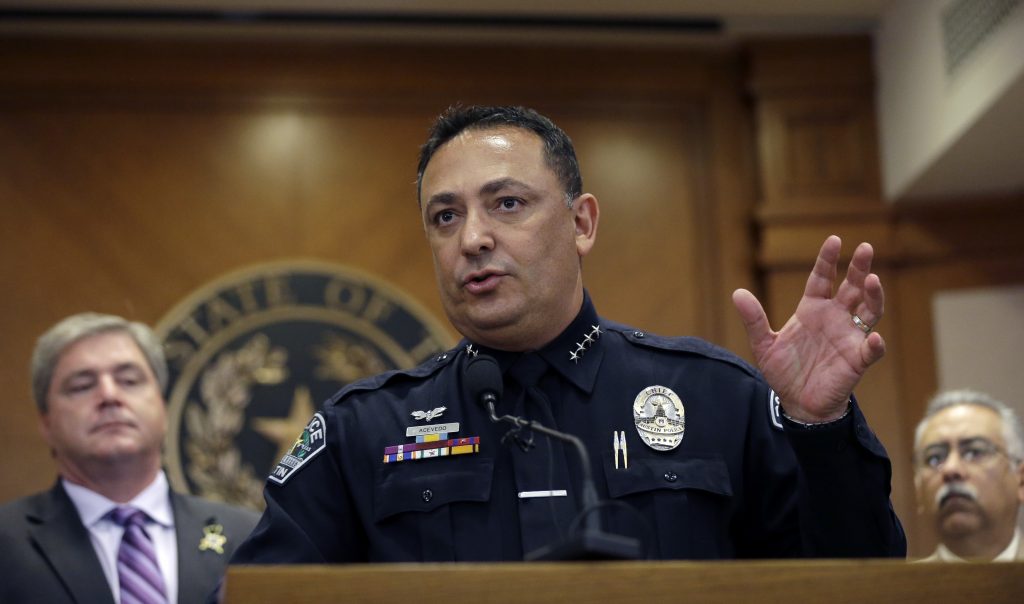 Even as a new Texas law targeting so-called sanctuary cities remains in legal limbo, police chiefs and sheriffs are making changes to comply, rewriting training manuals and withdrawing policies that prevented officers from asking people whether they are in the United States illegally.

The law, known as Senate Bill 4, goes into effect on Sept. 1 unless a federal judge in San Antonio blocks it. The law prohibits police from stopping an officer from inquiring into the immigration status of someone during an arrest or a traffic stop, and requires local jails to honor all “detainer” requests issued by federal immigration authorities. It’s aimed at sanctuary cities, broadly defined as places that limit cooperation with federal immigration authorities.

The state says the law promotes cooperation on immigration enforcement and prevents immigrants without legal status accused of a crime from being released. Several Texas cities and civil-rights groups sued the state, arguing that the law is unconstitutional and vague, that it would hamstring officers trying to work with immigrants who are victims of crime, and that it might inspire other states to pursue their own versions of the law. The state says Senate Bill 4 is different from the 2010 Arizona “show me your papers” law partially struck down by the U.S. Supreme Court.

U.S. District Judge Orlando Garcia is expected to issue a ruling before the law takes effect. But if he doesn’t, or if he rules against the cities and groups that sued Texas, law enforcement across the state will have to implement the law starting in two weeks.

Texas hasn’t issued any guidance to law enforcement agencies on whether to change their policies, nor has it required training on how officers are supposed to implement it. But police chiefs could face fines or jail time under the law if they prevent their officers from asking about a person’s immigration status.

Houston police are drafting a policy instructing officers about their responsibilities under the law. Police Chief Art Acevedo, an outspoken opponent of Senate Bill 4, said officers will be required to file a report anytime they ask someone about their immigration status.

In part, Acevedo said, he’s concerned about a minority of officers “taking SB4 as a mandate and as a blank check to go out and become immigration agents.”

“We chase crooks, not cooks and nannies and day laborers,” Acevedo said. “I think that’s a view that’s shared by the majority of Texas lawmen.”

The San Antonio Police Department has made plans to rescind parts of a 2015 policy that says its officers “do not, and will not, ask people they contact for proof of citizenship or legal residency.” The department will create training programs on the law if it stands, said spokesman Jesse Salame.

Police in Dallas are revising the department training manual and working on training for officers on how to enforce the law, KXAS-TV reported.

In Fort Worth, the department in the coming days will issue new instructions for officers on how to document each time they check someone’s immigration status, a spokesman told The Associated Press.

And in Austin, Travis County Sheriff Sally Hernandez is prepared to revise her department’s current policy to reject some “detainer” requests if the law goes into effect. Texas Republican Gov. Greg Abbott and federal officials have attacked Hernandez and Travis County by name for refusing to accept all “detainers” to turn over people in custody who lack legal status.

Texas’ biggest cities have large minority and immigrant populations, and tend to be more liberal than suburban and rural communities. While Texas is the nation’s largest conservative state, 39 percent of its population is Latino — around the same percentage as liberal California — and it has an estimated 1.5 million immigrants living in the country illegally.

Sheriffs from rural Texas, meanwhile, said the law would improve public safety by giving officers more information and more ways to cooperate with federal immigration authorities. Some have strengthened their ties with U.S. Immigration and Customs Enforcement, joining a program that trains their deputies to perform some of the duties of federal immigration agents.

A.J. Louderback, the sheriff in Jackson County, about 100 miles (161 kilometers) southwest of Houston, said Senate Bill 4 wouldn’t require new training programs or policy changes for his office or most sheriffs in the state, and that fears about the law’s impact were overblown.

Edgar Saldivar, a senior staff attorney at the American Civil Liberties Union of Texas, which is among the groups suing Texas over the law, said officers need more training to avoid discriminating against someone “on the basis of how they look, or even how they speak or what accent they have.

“There are numerous things that an officer would have to very quickly get up to speed on to avoid violating someone’s constitutional rights,” Saldivar said.