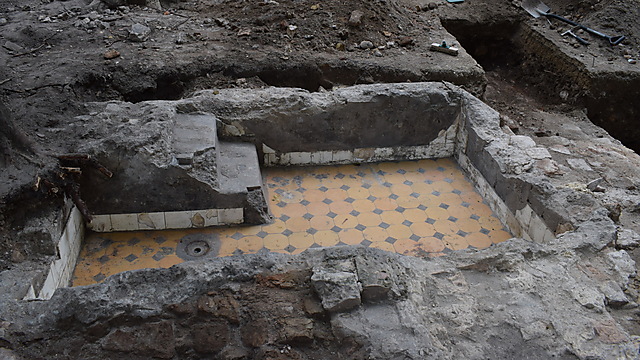 An international team of archaeologists from Israel, Lithuania and America, recently discovered two prewar mikvaos in the city of Vilna, Lithuania.

Last year, a study showed evidence of underground spaces in the area. This led to an excavation of the site and the exposure of the mikvaos.

Vilna’s main synagogue, built in the 17th century in Baroque-Renaissance style, was a large community center and a noted Torah center. It was the heart of Lithuanian Jewry and the compound housed the shul of the Vilna Gaon, zt”l, the community council building, 12 additional shuls and batei medrash, mikvaos, kosher meat stalls and more.

More than a hundred years after its founding, with the destruction of most of Lithuanian Jewry, the shul was looted and burned by the Germans. Later, the ruins were removed and a school was built on the site.

In July, the archaeologists unearthed the remains of two mikvaos used by mispallelim of the synagogue in Vilna.

“Until now, we had little information about the bathhouse and mikveh of the Jewish community – a community that comprised almost half of the city’s population.”

The excavation followed an architectural plan from the end of the 19th century, which was found in the municipal archive. These plans included details for the restoration of the mikveh by the community.

According to those plans, the mikveh consisted of two main floors, many rooms, and a large service wing. It was also possible to identify two installations that were built as mikvaos. This plan guided the researchers during the archaeological dig.

The two installations discovered are of the final phase of the mikvaos, which date to the early 20th century. They have tiled walls and floors, steps leading to the pool and an otzar (pool of rain water for the mikveh).

The researchers noted that “these recent discoveries add a new dimension to the understanding of the daily lives of the Jews of Vilna, and will certainly provide a new focus for understanding the lost cultural heritage of the Jewish community of Vilna, a vibrant community of hundreds of years that was destroyed in the Holocaust.”