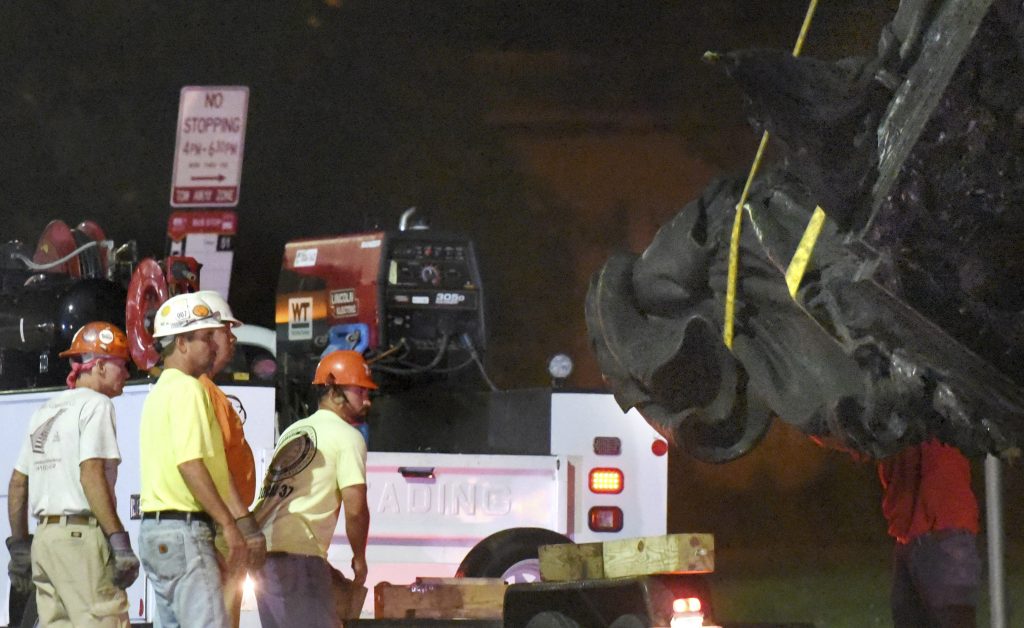 Confederate monuments in Baltimore were quietly removed and hauled away on trucks in darkness early Wednesday, days after a violent white nationalist rally in Virginia that was sparked by plans to take down a similar statue there.

“It’s done,” Pugh told the newspaper. “They needed to come down. My concern is for the safety and security of our people. We moved as quickly as we could.”

Video taken by WBAL-TV shows workers using a crane to lift the towering monument to Robert E. Lee and Thomas J. “Stonewall” Jackson onto a flatbed truck in the dark.

Pugh said Monday that she had contacted two contractors about removing the monuments, but declined to say when they would come down, saying she wanted to prevent the kind of violence seen in Charlottesville, Virginia. Pugh said at the time that she wants the statues to be placed in Confederate cemeteries elsewhere in Maryland.

A commission appointed by the previous mayor recommended removing a monument to Marylander Roger B. Taney, the Supreme Court justice who wrote the Dred Scott decision denying citizenship to African-Americans, as well as a statue of two Virginians — the Confederate generals Lee and Jackson.

Baltimore’s swift removal of the monuments comes days after what is believed to be the largest gathering of white supremacists in a decade — including neo-Nazis, skinheads and Ku Klux Klan members. They descended on Charlottesville for a rally prompted by the city’s decision to remove a monument to Lee.