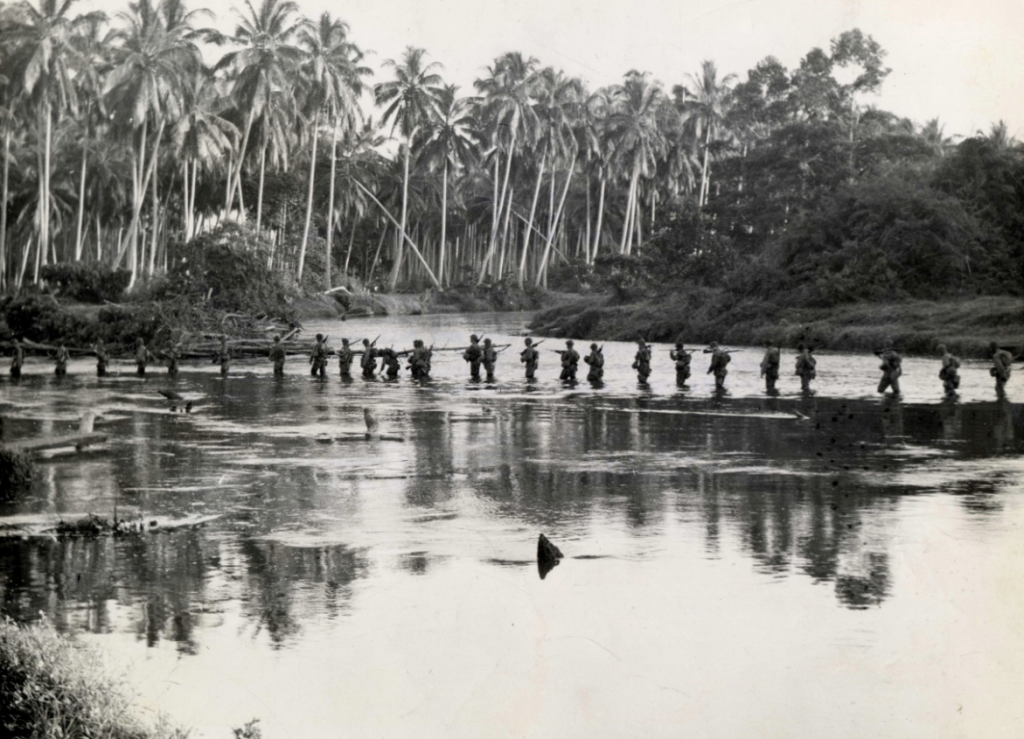 The Marines began lining the rail of the troop ship before dawn to peer at the distant shape emerging from the ocean.

War correspondent Richard Tregaskis remembered that it was so quiet that morning 75 years ago he could hear the swish of the water as the vessel steamed toward the rugged silhouette outlined against the sky.

“Suddenly … I saw a brilliant yellow-green flash of light coming from … a cruiser on our starboard bow,” he would recall. “I saw the red pencil lines of the shells arching through the sky, saw flashes on the dark shore … where they struck.”

It took a second for the booming sound of the guns to reach him, and when it did, he jumped.

They were the opening salvos of the epic World War II battle for the island of Guadalcanal. On Monday, the country will mark the 75th anniversary of the fight with a ceremony at the World War II Memorial in Washington.

Eclipsed today by memories of Iwo Jima and D-Day, the struggle for Guadalcanal was the first major U.S. ground offensive in the Pacific theater against the Japanese empire.

The campaign went on for six months, riveting the nation, as the U.S. and Japan poured ships, planes and men into the fight for the malarial, jungle-covered mass in the Solomon Island chain, northeast of Australia.

There were seven major sea battles, often fought at night with torpedoes and search lights. Several were disastrous defeats for the U.S.

So many ships were sunk in one area north of the island that it became known as Iron Bottom Sound.

After one big defeat, an American Naval officer, who had already lost a ship at Pearl Harbor, committed suicide.

There were numerous land battles, most of which ended in grim losses for the Japanese, who called Guadalcanal “Starvation Island.”

The campaign produced heroes. Marine Corps Sgt. John Basilone was awarded the Medal of Honor for mowing down waves of enemy attackers with his machine gun crews. (He was later killed on Iwo Jima.) Marine Pvt. Al Schmid did a similar thing, and got the Navy Cross. Schmid was blinded near the end of his fight, but kept firing, with directions from a buddy who told him where to point the machine gun.

Virginia historian Richard B. Frank, author of the 1990 book, Guadalcanal, said, “There’s nothing really … comparable to it in all of World War II, in terms of sustained combat in land, sea and air.”

Despite the heavy losses, both sides sent in reinforcements. The mighty Japanese army had rarely tasted defeat in its march of conquest across the Pacific. And it wasn’t clear if the Americans were up to stopping it.

“This was the first real test of what’s now referred to as the Greatest Generation,” Frank said. “Going toe-to-toe with an Axis power at the height of their capability, to see whether we had what it would take.”

“Guadalcanal was really that testing ground,” he said. “People talk about Normandy or Iwo Jima … but for the generation that fought the war, (Guadalcanal) was very, very big deal.”

In October 1942, as the fighting raged, columnist and radio personality Paul Schubert wrote in The Washington Post: “Few of our generation will forget the tension and suspense. … To wait for news while a battle is going on, to wonder … to be far behind the front, powerless to help … that is the fate of the citizen at war.”

The fight for the island began after the Japanese landed on June 8, 1942, to begin construction of an air strip.

The U.S. and its allies realized such an air base would threaten shipping lanes to Australia and decided to seize the island from the Japanese.

The battle began when the Marines landed on Aug. 7.

Correspondent Tregaskis went with them, and his book, published in 1943, remains a classic. He braved sniper fire, an earthquake and illness to chronicle the event.

Other journalists went along, too. John Hersey nearly drowned there in a plane crash. His account of a patrol, is another classic.

One reporter, Jack Singer, who worked for the old International News Service, was killed when the aircraft carrier he was on, the USS Wasp, was torpedoed in September and sank. Singer was last seen sitting at his typewriter. His final dispatch was written for him by surviving officers from the Wasp.

Sketch artists like Howard Brodie, who went on to become a famous courtroom artist, and Donald L. Dickson captured the battle on paper and drew haunting portraits of the combatants.

The fighting on land was brutal. In some cases it was hand-to-hand. Men were clubbed to death, stabbed, strangled. Hersey wrote that the jungle itself felt malevolent.

Marine Pfc. Robert Leckie remembered: “It was a darkness without time. It was an impenetrable darkness. To the right and left of me rose up those terrible formless things of my imagination. … I could not see, but I dared not close my eyes lest the darkness crawl beneath my eyelids and suffocate me.”

The novelist James Jones, who served there with the Army, killed a Japanese soldier with his bare hands, according to a brief biography in [one of his novels]. Jones was discharged in 1944, suffering from combat fatigue.

The Guadalcanal campaign ended when the battered Japanese evacuated the island in January and February of 1943.

About 30,000 of their men had been lost, along with many ships, and over 500 planes, according to Frank’s history.

The U.S. and its allies lost about 7,000 men, numerous ships, including two aircraft carriers, and 480 planes.

At the end of the desperate jungle patrol Hersey would make famous in his book, he paused to speak with the Marine officer he was with, Capt. Charles A. Rigaud.

The patrol had been a mess. Rigaud’s Marines had been ambushed and had started to flee until he stopped them, saying he was ashamed of them.

“And they call you Marines,” he had scolded.

Now the patrol was over. Rigaud apologized to Hersey for the conduct of his men, saying the enemy had caught them in a tight spot.

“What are you going to do now?” the officer asked him. “You going back to the States?”

“Not tonight,” Hersey replied. “But soon, I guess.”

“What I’d give to be you,” the captain said.