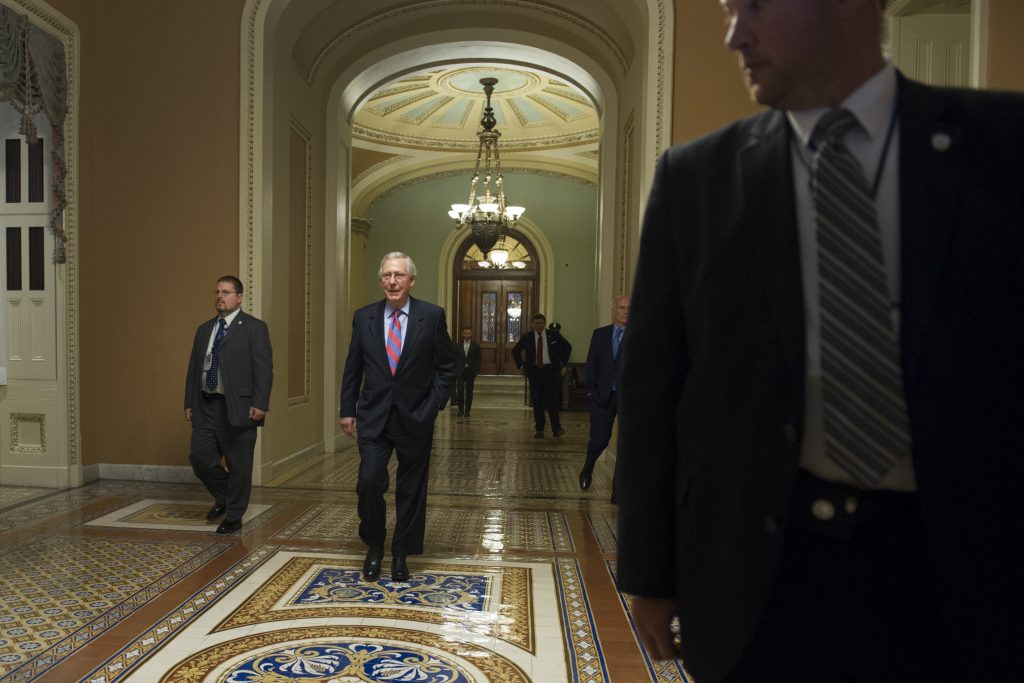 Dealing a serious blow to President Donald Trump’s agenda, the Senate early Friday rejected a measure to repeal parts of former President Barack Obama’s health-care law after a night of high suspense in the U.S. Capitol.

Unable to pass even a so-called “skinny repeal,” it was unclear if Senate Republicans could advance any health bill despite seven years of promises to repeal “Obamacare.”

The debate began just before 1:30 a.m. on Friday morning.

Despite controlling the Senate, the House and the White House, Republicans have struggled for months with repealing Obamacare, a complex law approved by Democrats in 2010 under former President Barack Obama that provided health insurance to millions of previously uninsured Americans.

President Trump, who campaigned for the White House on promises to repeal Obamacare, has offered no legislation of his own and little guidance to the Senate, although he has berated them for their inaction.

Republicans hold 52 seats in the 100-seat Senate and Sen. McConnell could only afford to lose support from two Republican senators, with the tie-breaking vote to be cast by Vice President Mike Pence, who was on the Senate floor.

All eyes were on Sen. McCain, who flew back from Arizona after being diagnosed with brain cancer in order to vote, and sat with Senators Collins, Murkowski, and Senator Jeff Flake, also from Arizona.

Senators Collins and Murkowski (Rep.) both voted against more comprehensive Republican proposals to repeal and replace Obamacare this week. Trump has singled out Sen. Murkowski for criticism, saying on Twitter that she had let down the Republican Party and the country.

McCain was approached minutes before the vote by  V.P. Pence and Republican Senator Lindsey Graham. Graham had said on Thursday he had decided to vote for the skinny bill after reassurances from House Speaker Paul Ryan that it would not become law.

After speaking to V.P. Pence and Sen. Graham for some time, McCain walked across the floor to tell Senate Minority Leader Chuck Schumer and Senators Dick Durbin, Elizabeth Warren, Amy Klobuchar and Dianne Feinstein that they had his vote. Feinstein embraced him as voting began.

Cheers erupted in the Senate chamber as McCain cast what was believed to be the deciding “no” vote.

After the bill’s failure, Schumer told the Senate that it was time to heed McCain’s call this week to return to a more transparent and bipartisan legislative process.

“He’s a hero, he’s a hero of mine,” Schumer told reporters after the vote.

The amendment was a last resort for Senate Republicans to pass something — anything — to trigger negotiations with the House.

“This is clearly a disappointing moment,” said Senate Majority Leader Mitch McConnell, R-Ky. He put the health-care bill on hold.

Buoyed by a signal from House Speaker Paul Ryan, Sen. McConnell had introduced a pared-down health-care bill late Thursday that he hoped would keep alive Republican ambitions to repeal “Obamacare.”

Sen. McConnell had called his measure the Health Care Freedom Act. It was not intended to become law, but to open a path for a House-Senate conference committee to try to work out comprehensive legislation Congress could pass and send to President Trump.

The measure would have repealed the unpopular Affordable Care Act requiring most people to have health insurance or risk a fine from the IRS. A similar requirement on larger employers would be suspended for eight years.