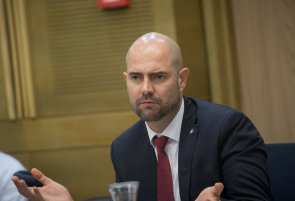 Prime Minister Binyamin Netanyahu cancelled a scheduled Knesset appearance to discuss it at the last minute Wednesday morning, citing “emergency security discussions” with top officials, but the plenum went ahead and discussed – or rather sharply debated – the Nationality Law, which sets Hebrew as the official language of Israel, Jerusalem as its capital, and sets the State of Israel as the national homeland of the Jewish people. Arabic has a “special status” as a minority language. The law was approved by the Ministerial Law Committee in May for a Knesset vote, and is currently being discussed by the Knesset Constitutional Committee and Control Committee.

The law was proposed by Likud MK Avi Dichter, and the coalition is on board with it. Not so the opposition, which on Wednesday said that the law was “racist” and would “destroy democracy.” MK Tzippy Livni (Zionist Camp) said that it would “bury the Declaration of Independence, which is the identity card of Israel. If that document had been proposed today you on the right would not approve it. You do not believe in equality.” Party chairman MK Yitzchak Herzog said that supporters of the bill were “playing with fire. You are proposing a law that will test loyalty to the state. What will you say to the parents of the Druze police officers who lost their sons in the Har Habayis terror attack,” who are Arabic speakers. “This country has been here for 70 years and you claim it has no identity? This is a country with a Jewish majority and an Arab minority and equal rights for all.”

Other members of the opposition were less genteel, shouting down MKs in the coalition who spoke up in defense of the bill. Six MKs – Michal Rosen and Ilan Gilon (Meretz), Masoud Ghanim, Osama Sa’adi, Ahmed Tibi (United Arab List) and Yoel Chasson (Zionist Camp) were ejected from the plenum for refusing to stop their shouting.