National President Trump: Health Bill ‘Will Get Even Better’ at Lunch
National 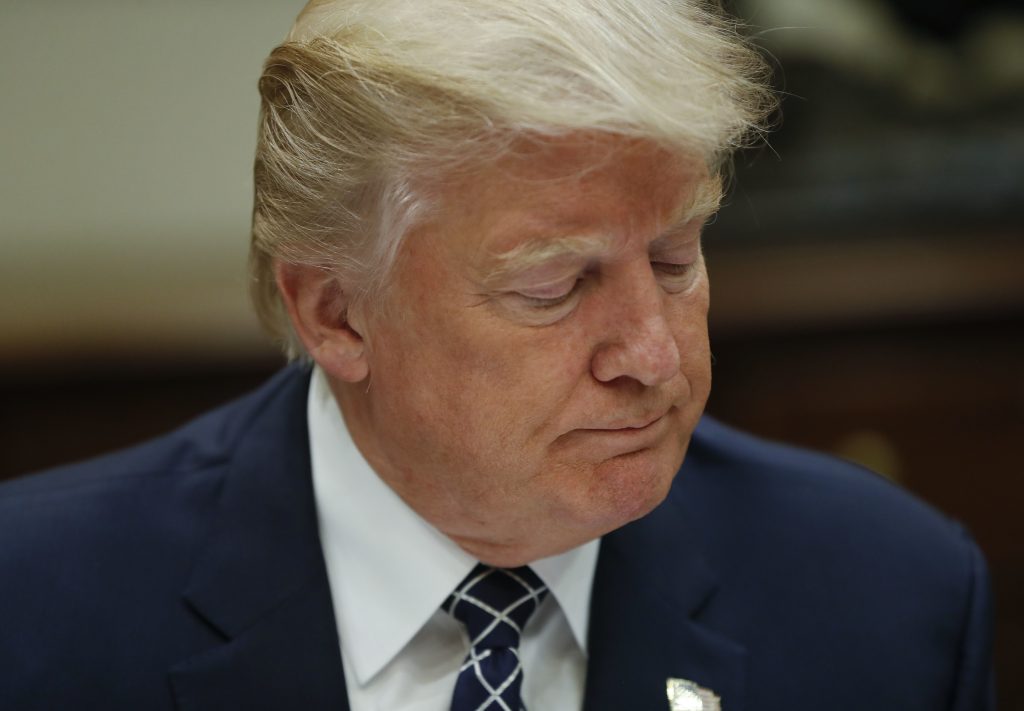 President Donald Trump on Wednesday stepped up the pressure on reluctant Republicans to erase much of Barack Obama’s health care law, tweeting, “They MUST keep their promise to America” and vowing the measure would improve at his White House lunch with senators.

In a last-ditch effort to revive the bill, President Trump invited all 52 Republicans to the White House, a day after the GOP’s seven-year quest crashed and burned in a humiliating defeat for the president, Majority Leader Mitch McConnell and the GOP.

President Trump tweeted ahead of the session, “The Republicans never discuss how good their healthcare bill is, & it will get even better at lunchtime. The Dems scream death as OCare dies!” and “I will be having lunch at the White House today with Republican Senators concerning healthcare. They MUST keep their promise to America!”

President Trump stayed largely on the sidelines as McConnell struggled unsuccessfully to round up support to make good on the GOP’s years of promises to repeal and replace Obama’s health care law. But with McConnell’s third and final effort — on a repeal-only bill — looking like it, too, had collapsed, Trump urged McConnell to delay a make-or-break vote until early next week.

President Trump’s lunch echoes a similar move in June after McConnell fell short on his first health care effort, and it yielded no apparent results. Indeed Trump seated himself between two GOP senators — Susan Collins of Maine and Lisa Murkowski of Alaska — who announced Tuesday they would oppose McConnell’s efforts to move forward with the latest bill.

Along with opposition from a third GOP senator, Shelley Moore Capito of West Virginia, that was enough to kill the legislation. McConnell can lose only two votes and still move forward in the closely divided Senate.

It looked like after seven years of campaigning on the issue, Republicans had discovered once in power that their own divisions would prevent them from delivering. McConnell was ready to hold the showdown vote Wednesday, to get senators on record on the issue and move on to other priorities like overhauling the tax code. But in a closed-door GOP lunch, fellow Republican senators urged him to wait, according to Republicans present who demanded anonymity to discuss the private issue. McConnell announced late Tuesday that the vote would occur early next week, “at the request of the president and vice president and after consulting with our members.”

Yet with Murkowski, Collins and Capito already on record as “no” votes, and others harboring private reservations, it’s not clear what can change over the next several days. Trump himself earlier Tuesday sounded ready to move to other issues.

Despite the current law’s problems, most health care experts do not believe it is at immediate risk of outright failure, and Democratic cooperation to adjust the law is far from assured.

Nor does it appear likely that Republicans can escape owning the problems with the law and the health care system overall, now that they control the House, Senate and White House, partly on the strength of campaigning against the law.

“They seem to have this notion that they can be a majority party, and have control of the White House, and not be responsible for bringing down the health care system,” said Democratic Sen. Dick Durbin of Illinois. “It doesn’t work that way.”

McConnell had been hunting for votes to open debate on a revived version of legislation Congress sent to Obama’s desk in 2015 that would have repealed major portions of Obamacare, with a two-year delay built in. Many Republicans support the repeal-only approach, and they questioned how senators who voted for the legislation two years ago could oppose it now.

But for others, the implications were too severe now that the bill could actually become law with a Republican president in the White House ready to sign it. The Congressional Budget Office has estimated that more than 30 million people would lose insurance over a decade under the legislation.

Collins voted against the legislation in 2015 while Murkowski and Capito both supported it. Murkowski told reporters that repealing the Affordable Care Act without the promise of a replacement would cause uncertainty and chaos.

“To just say repeal and ‘Trust us, we’re going to fix it in a couple of years,’ that’s not going to provide comfort to the anxiety that a lot of Alaskan families are feeling right now,” she said.

What’s next? Go back to the committee room and work on a bipartisan basis “in a way that the public feels that we are really working toward their best interests,” Murkowski said.

Indeed Sen. Sen. Lamar Alexander of Tennessee, chairman of a Senate health panel, subsequently announced he planned hearings on the issue in the next few weeks, a step Senate Republicans have not taken to date.