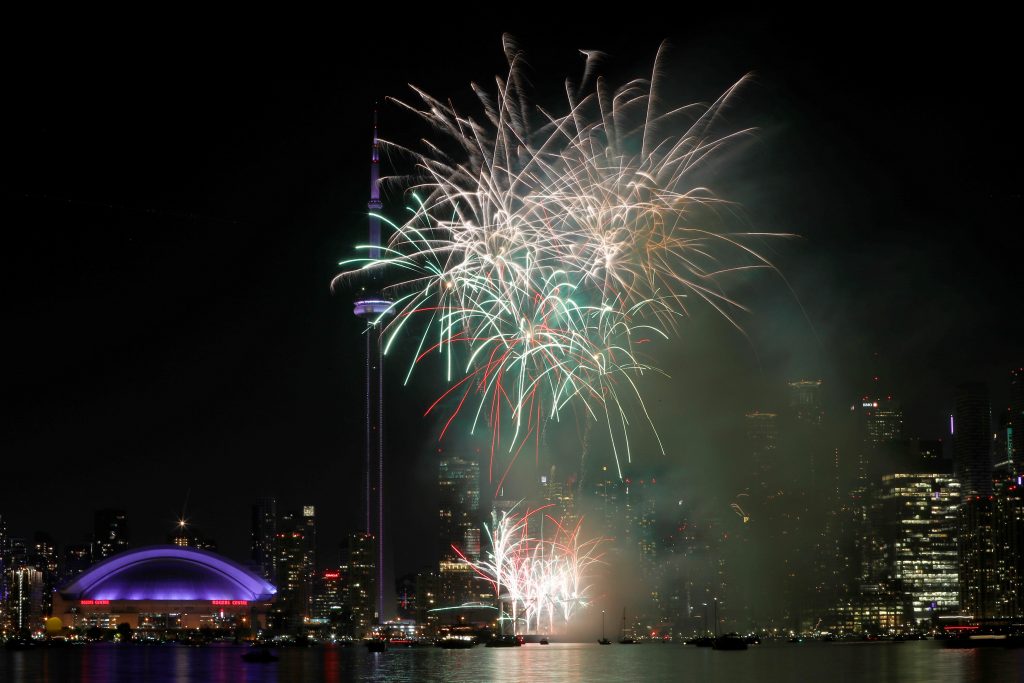 Canada’s long-anticipated 150th birthday celebrations on Saturday were marked by heavy rains and some protests, though the downpour failed to dampen spirits of revelers who thronged in large numbers to enjoy musical performances and parades.

Prime Minister Justin Trudeau kicked off celebrations amid heavy security and some 25,000 people assembled at a large outdoor celebration in front of the national Parliament in Ottawa

The bad weather meant a fly-past featuring Canadian warplanes was canceled and later on, an evening concert was delayed by an hour to allow the rain storms to pass.

The long-anticipated Canada Day festivities, which included other features such as acrobats, and special citizenship ceremonies across large cities, concluded with fireworks.

Trudeau, accompanied by Britain’s Prince Charles, shook hands with some of the thousands of revelers who converged on Canada’s capital Ottawa.

“Canada is a country made strong not in spite of our differences but because of them,” Trudeau told the gathering. “We don’t aspire to be a melting pot – indeed, we know true strength and resilience flows through Canadian diversity.”

Still, in the run-up to the celebrations, some controversy was stirred at home, particularly among First Nations who noted Canada’s history of mistreatment of indigenous people. Activists erected a teepee on Parliament Hill on Thursday in protest.

On Saturday, about 100 indigenous protesters marched through Toronto, carrying red flags and with some holding the Canadian national flag upside down.

Some cities celebrated in more unusual ways. Toronto, Canada’s largest city, featured a giant rubber duck floating in its harbor, while Calgary planned a “living flag” composed of people wearing red and white. The yellow duck, which cost C$200,000 ($154,273) including the rent, according to the Globe and Mail, drew criticism from some who described it as a waste of taxpayer money.

Security was already ramped up in the days ahead of the celebration and partygoers contended with road closures and concrete barriers across entrances into Parliament Hill, located in downtown Ottawa.

National and local police were also out in force, with security top priority for many Canadians in the wake of fatal attacks in London, Paris and Germany.

Saturday marks the 150th anniversary of the day Canada officially became a country. Britain had ruled it before 1867.

“Canada 150 years ago was a project, it was an idea to bring together four colonies with very different historical backgrounds,” said Pierre Anctil, history professor at the University of Ottawa.

“We should celebrate but we should not be complacent. It’s not a finished project,” he added.

The nationwide party comes as Canada is enjoying an unusual amount of interest from the rest of the world, largely due to the election of charismatic and selfie-prone leader Trudeau.

“As a society, we must acknowledge and apologize for past wrongs, and chart a path forward for the next 150 years,” Trudeau said in a statement ahead of the official kickoff.

Indigenous-rights group Idle No More called for a national day of action on Saturday, telling supporters to hold rallies and take to social media.

Events and installations celebrating the sesquicentennial milestone have already been held across the country this year, with the total cost to the federal government reported to be half a billion dollars.

Along with fireworks, free museums and outdoor concerts nationwide on Saturday, more than 50 special ceremonies to swear in new citizens were planned across the country.

Twitter users were sharing their favorite Canadian songs and food, along with photos of the preparations under the hashtag Canada150.

Prince Charles and his wife Camilla arrived for an official visit on Thursday. The royals began a three-day tour with a trip to the northern territory of Nunavut, home to a large number of First Nations and Inuit people.

The bash in Ottawa culminated with a musical fireworks show that is billed as largest-ever such display for Canada Day. It lasted 20 minutes and 17 seconds to commemorate 2017.

“One hundred fifty years? Nah. Look at us: Canada is being born today,” Trudeau told the crowd soaked by the rain.