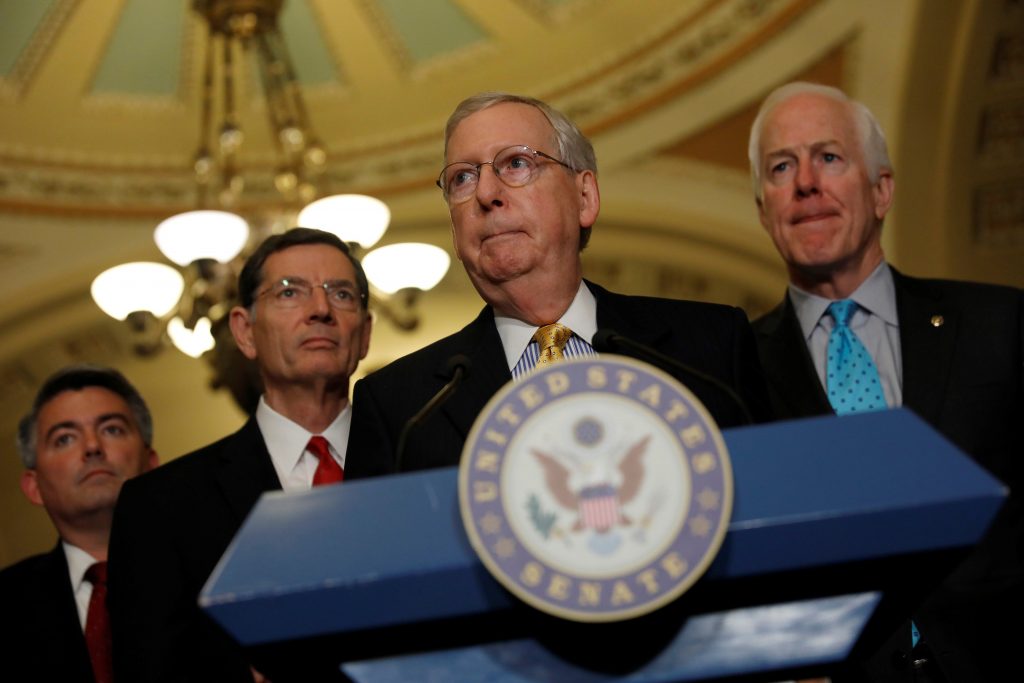 In a bruising setback, Senate Republican leaders are delaying a vote on their prized health care bill until after the July 4 recess, forced to retreat by a GOP rebellion that left them lacking enough votes to even begin debating the legislation, two sources said Tuesday.

Senate Majority Leader Mitch McConnell, R-Ky., delivered the message to GOP senators at a private lunch also attended by Vice President Mike Pence and White House chief of staff Reince Priebus. The decision was described by a Republican aide and another informed person who spoke on condition of anonymity because they were not authorized to speak publicly about the closed-door decision.

All GOP senators were planning to travel to the White House later Tuesday to meet with President Donald Trump, one source said.

McConnell had hoped to push the measure through his chamber by this week’s end, before an Independence Day recess that party leaders fear will be used by foes of the legislation to tear away support.

The bill rolling back much of President Barack Obama’s health care law has been one of the party’s top priorities for years, and the delay is a major embarrassment to Trump and McConnell. At least five GOP senators — conservatives and moderates — had said they would vote against beginning debate, and the bill would be derailed if just three of the 52 Republican senators vote against it.

Lee was among four conservatives who announced last week that they were against the current version of the legislation. His spokesman, Conn Carroll, said Tuesday that Lee would not vote to commence debate on the bill “as it is currently written.”

“I would not bet against Mitch McConnell,” his House counterpart, Speaker Paul Ryan, R-Wis., told reporters. But the Senate was convening later than usual Tuesday, and it soon became clear the votes weren’t there even to begin debate.

The CBO analysis suggested some ammunition GOP leaders could use, saying the Senate bill would cut federal deficits by $202 billion more over the coming decade than the version the House approved in May. Senate leaders could use some of those additional savings to attract moderate votes by making Medicaid and other provisions more generous, though conservatives would rather use that money to reduce red ink.

Minutes after the CBO report’s release, three GOP senators threatened to oppose beginning debate. Moderate Sen. Susan Collins, R-Maine, said she would vote no. She tweeted that she favors a bipartisan effort to fix Obama’s statute but added, “CBO analysis shows Senate bill won’t do it.”

Conservative Sen. Rand Paul, R-Ky., said he would oppose the motion to open debate unless the bill was changed.

Lee and other conservatives have favored a fuller repeal of Obama’s statute than the Senate bill would enact.

The 22 million extra uninsured Americans were just 1 million fewer than the number the budget office estimated would become uninsured under the House version. Trump has called the House bill “mean” and prodded senators to produce a package with more “heart.”

The budget office report said the Senate bill’s coverage losses would especially affect people between ages 50 and 64, before they qualify for Medicare, and with incomes below 200 percent of poverty level, or around $30,300 for an individual.

The Senate plan would end the tax penalty that law imposes on people who don’t buy insurance, in effect erasing Obama’s so-called individual mandate, and on larger businesses that don’t offer coverage to workers.

It would let states ease Obama’s requirements that insurers cover certain specified services like substance abuse treatments, and eliminate $700 billion worth of taxes over a decade, CBO said, largely on wealthier people and medical companies that Obama’s law used to expand coverage.

It would cut Medicaid, which provides health insurance to over 70 million poor and disabled people, by $772 billion through 2026 by capping its overall spending and phasing out Obama’s expansion of the program. Of the 22 million people losing health coverage, 15 million would be Medicaid recipients.

CBO said that average premiums around the country would be higher over the next two years — including about 20 percent higher in 2018 than under Obama’s statute — but lower beginning in 2020.

But the office said that overall, the Senate legislation would increase consumers’ out of pocket costs. That’s because standard policies would be skimpier than currently offered under Obama’s law, covering a smaller share of expected medical costs.