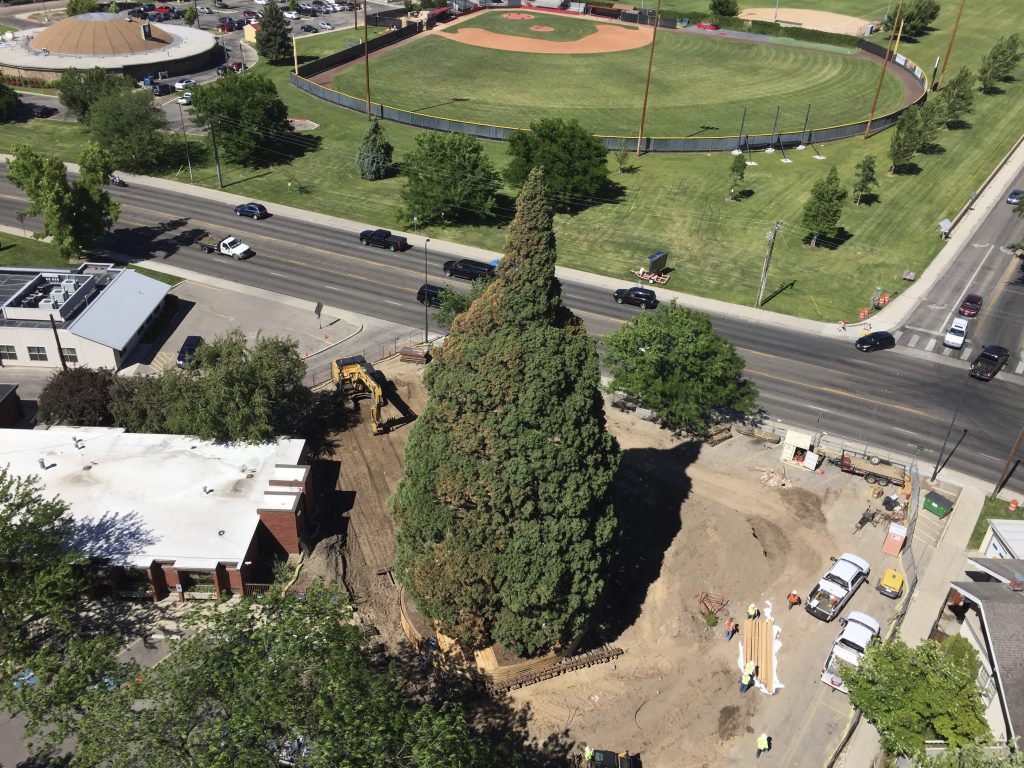 A large sequoia tree with a history rooted in conservation was standing in the way of progress, so on Sunday, it was moved.

More than a century after it was planted as a sapling in a doctor’s yard in Boise, Idaho, the 10-story tree was shifted across the street to make way for a hospital expansion.

Once it reached its destination, crews had a bit of trouble because the inflation tubes that carried it were too long for the hole that had been dug, Kissée said. They made the hole bigger and placed the tree in at about 11:15 a.m. The movers plan to let the tree settle overnight and work on leveling it on Monday, she said. They’ll also move a lot of the soil from the original site to help the tree adapt, she said.

Here are some things to know about it and its trip, months in the making.

More than 100 years ago naturalist John Muir sent four sequoia seedlings to Emile Grandjean, a conservation-minded professional forester and early employee of the U.S. Forest Service in Idaho. Of the four sequoias from Muir’s seedlings, the only one that still exists is the one that was moved. St. Luke’s Health System is spending $300,000 to move the 98-foot (30-meter) tree to city property about two blocks away. “We understand the importance of this tree to this community,” said Kissée. Cutting it down “was never even an option.”

WHAT’S SO SPECIAL ABOUT SEQUOIAS?

Sequoias in their native habitat in California draw moisture from the misty atmosphere and can live for a few thousand years and reach several hundred feet tall. The Idaho sequoia is in a drier, colder climate, and the tree lost its original top in the 1980s due to damage from decorations. The hospital at that point hired tree experts and the sequoia has since thrived.

WHAT ARE PEOPLE SAYING?

Christian Schaffeld lives near the tree, which he loves. But he also has a personal connection to the hospital that’s seeking more space. “I grew up here in Boise. … I plant a lot of trees in my backyard — about 200 of them, right up the street — and I am amazed: That’s the biggest tree I’ve ever seen ever picked up and transplanted. It’s amazing that they’re doing this. It’s a service to the City of Trees that kind of epitomizes Boise.”

HOW CHALLENGING IS THE MOVE?

Tree mover David Cox says the sequoia will be the tallest tree his company, Environmental Design, has ever moved as well as having the greatest circumference at more than 20 feet (6 meters) near its base. Cox said soil analysis was been done at the transplant site to ensure it will allow the tree to keep growing. He said most of the soil surrounding the tree’s roots also is being moved to improve the chances of the transplant succeeding. If it works, the tree could remain a Boise landmark for several more centuries. Cox says there’s a 95 percent chance the tree will survive.