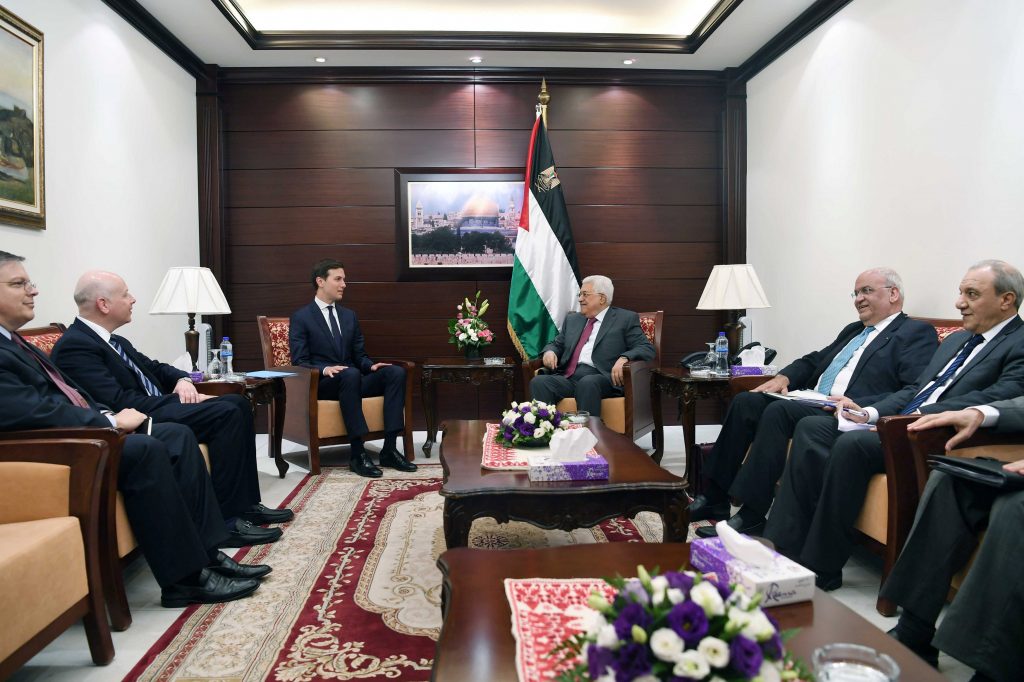 The Palestinians were “disappointed” by the results of their meeting with U.S. envoys to the Middle East Jared Kushner and Jason Greenblatt, Haaretz reported Friday. The two met in Ramallah Wednesday with PA chief Mahmoud Abbas, after the envoys met with Prime Minister Binyamin Netanyahu.

That meeting, a White House statement said, was “productive and the two sides reaffirmed their commitment to advancing President Trump’s goal of a genuine and lasting peace between the Israelis and the Palestinians that enhances stability in the region.” That was not the case at the Abbas meeting, according to sources at the meetings cited by Haarertz, who said that the differences between the sides were noticeable, and that no agreements had been reached.

The meeting started on a sour note from the Palestinians’ perspective, the sources said, as the first subject the Americans raised was the continued payment of monies to the families of terrorists in Israeli prisons. One source at the meeting was quoted as saying that the two “sounded like representatives of Netanyahu, not honest brokers. They started presenting Netanyahu’s position on numerous issues, and we asked them then to present the American positions on the core issues” of settlements, Yerushalayim, and the repatriation of the descendants of Arabs who fled Israel at the establishment of the state.

Abbas, the Palestinian source told Haaretz, sought to equate the matter of payments to terrorists’ families with Israeli building in Yehudah and Shomron. “We told them that on the day of their arrival Netanyahu declared that Israel would build thousands of homes, and we asked them their opinion of this, and we did not get an answer,” the source said.

American sources quoted in the report told a different story. Although the payments issue was raised, the meeting did not get bogged on it, and in general it was conducted in a “positive and effective” manner, and that most of the discussion was dedicated to understanding the Palestinian position on specific issues in preparation for the next round of talks. In its statement on the Abbas meeting, the White House said that both “United States officials and Palestinian leadership underscored that forging peace will take time and stressed the importance of doing everything possible to create an environment conducive to peacemaking.”