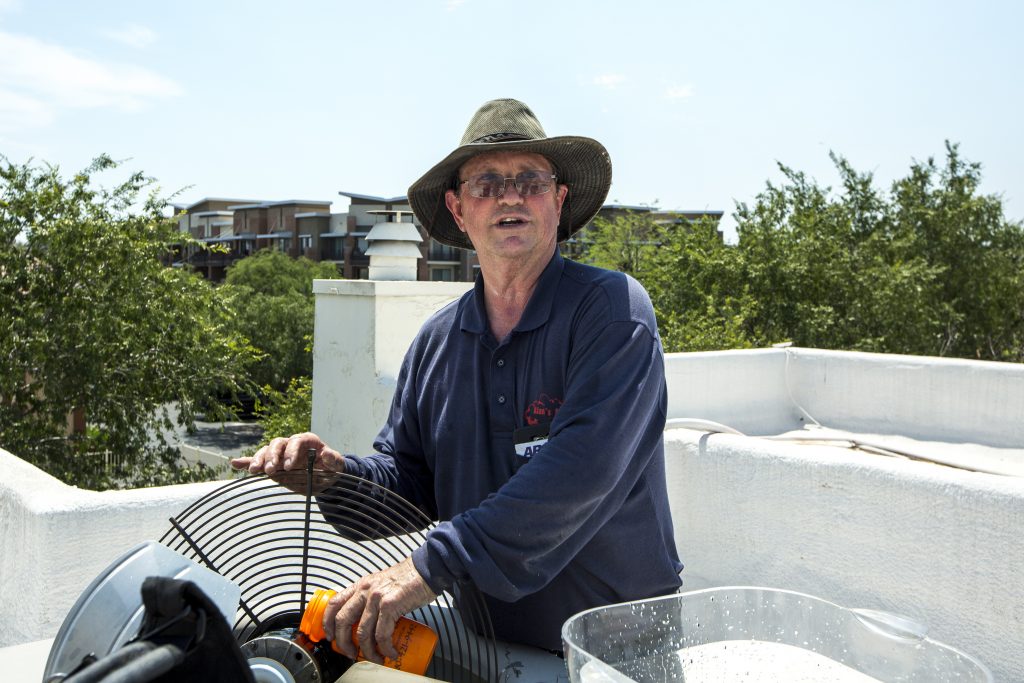 Alan Schwandt was rushing to his second job of the day when his phone rang with another desperate Phoenix homeowner calling about a broken air conditioner amid a scorching heat wave.

Dressed in gray shorts and a navy long-sleeve shirt emblazoned with the bright-red logo for “Alan’s Air,” Schwandt quickly crisscrossed the Phoenix metro area to bring relief to flushed residents.

He toiled in temperatures close to 120 degrees sometimes with one hand on his cellphone and the other on his tools. Residents who had just spent the night in a stifling home rejoiced when his work was done.

The Associated Press spent part of Monday alongside Schwandt to provide a snapshot into the hectic work necessary in a region heavily reliant on air-conditioning to beat the heat. Health officials with Maricopa County, which is home to the Phoenix area, say most heat-related deaths involve people with non-functioning air conditioners.

“Sometimes you wish the phone would ring for more calls, and sometimes you hope the phone doesn’t ring,” Schwandt said. “This is probably the day you don’t want it ringing because there’s more work than you can do.”

Schwandt knew early Monday that it was going to be busy. The temperature was expected to peak at 118 degrees and calls were already coming in.

As a child in Florida, Schwandt watched his father work as an air-conditioning repair worker. He later went to school to learn the trade and started his own company in 1978.

He said he hasn’t advertised in 20 years, garnering service purely from word of mouth and online reviews.

Monday morning started in Scottsdale, a Phoenix suburb, with a longtime customer who had called the night before.

Russ Goodman said the temperature in his house had risen to 89 degrees by the time he went to bed.

“Just in case the whole thing went caput, I’m all set: I have a villa reserved at the hotel,” Goodman said, as Schwandt and technician Mike Miller examined the air-conditioning unit.

He determined they needed to swap the capacitor, which acts like a battery and boosts the heart of the cooling cycle inside the machine.

Twenty minutes later, Goodman gleefully put his hand up to a vent relishing the cold air.

“These are like the unsung heroes — the people that keep my life going,” he said.

As the mercury climbed above 100 degrees, Schwandt and Miller traveled south to the city of Tempe.

Schwandt fielded another call from a customer before joining his technician on a roof to examine a 15-year-old air conditioner.

The pair replaced a blown fuse and finished the job in less than half an hour.

Schwandt headed back to Scottsdale to drop off Miller at his home office for a separate assignment.

Schwandt arrived at a Scottsdale apartment complex at 10:30 a.m. His maintenance truck was among three others at the complex.

The client, Sean Robertson, was relieved to see Schwandt and said that he’d slept on his living-room couch Sunday night with a cooling pad on top of his pillow.

Schwandt climbed onto the roof and discovered the unit was too hot to touch because it had been running for 24 hours.

“Turn your unit off if it’s not cooling,” he said. “All it can do is cause more damage to it.”

Schwandt removed several metal panels from the unit’s exterior, climbed down the ladder and retrieved a hose and a bucket. He poured cup after cup of water over the fan as two other air conditioning repairmen worked on a nearby rooftop.

Eventually the machine cooled enough so Schwandt could unscrew it to look inside.

He determined that the unit’s motor needed to be replaced, but he didn’t have the part on hand.

Schwandt promised Robertson he would return later to switch the part, leaving tools behind as he moved on to the next customer.

With the sun almost at its zenith, Schwandt reunited with Miller at a home in Phoenix.

Michelle Franklin’s air-conditioning unit stopped working months ago, but she knew she needed to get it replaced when she saw the heat wave forecast this week.

Miller brought the new unit and Schwandt brought in the heavy equipment: a crane.

Jayme Martens, a crane operator for Smiley Crane Service, said the company helps lift about 180 new air-conditioning units every day in the summer. Each crane is equipped with an ice chest, so air-conditioning repair workers can have cold bottled water as they work.

“It’s always hot but you have a job and have to do your job no matter what it is,” Schwandt said.