Cheering 1st Day of Summer? Not When It’s 120 Degrees 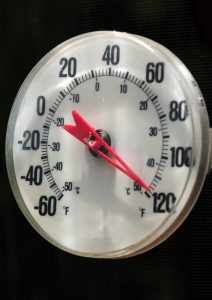 The first day of summer brought some of the worst heat the Southwest U.S. has seen in years, forcing flights to be canceled, straining the power grid and making life miserable for workers toiling in temperatures that could reach 120 degrees in Phoenix.

Arizona is seeing some of the most dramatic temperatures Tuesday, but the heat wave is being felt across Nevada and California, too.

The forecast called for a high of 120 degrees in Phoenix, 119 in Palm Springs, California, and 126 in Death Valley. The extreme heat led the operator of California’s power grid to call on people to conserve electricity during peak hours.

At a downtown Phoenix construction site, men in hard hats and yellow vests labored and sweated in the morning heat and downed water to stay hydrated. Project superintendent Tommy Russell says his company has held weekly safety meetings to prepare for the heat, and he will send all his workers home if it hits 120.

Landscaper Juan Guadalupe scaled a spindly palm tree more than 50 feet tall in Phoenix, using a chain saw to hack the branches. He planned to drink at least two gallons of water and quit his day at two p.m. — before the really ugly temperatures arrive.

He didn’t mind being tethered to a tall tree because he occasionally catches a cool breeze.

With the cooling and hydration stations in full swing across the region, hundreds flocked to a church in Phoenix for water, meals, snacks, and refuge.

“We have homeless people come from a long way to sit here,” longtime volunteer Moses Elder said. “There are other spots where you can go get cold water and sit down and cool off, but there are few places you can lay down and get something to eat.”

The church houses about 180 people every day during the summer and typically goes through about 25 cases of water and 50 pounds of ice a day, Elder said.

The city reached 118 on Monday, which the National Weather Service says is rare. In fact, temperatures at that mark or higher have only been reached 15 times since record-keeping started in 1896.

The weather comes as new research found that nearly one in three people now experience 20 days a year when the heat reaches deadly levels. The study of nearly 2,000 deadly heat waves worldwide since 1980 was published Monday in the journal Nature Climate Change.

In the Southwest U.S., the heat has caused several problems this week.

In addition to grounding more than 40 flights of smaller planes, airlines have been taking other measures on larger jets to reduce their weight. American Airlines spokesman Ross Feinstein said the carrier began limiting sales on some flights to prevent the planes from exceeding maximum weight for safe takeoff in the hot conditions.

The main burn center in Phoenix warned people to be careful around car interiors and pavement and with their pets.

About 50 people went to a PetSmart store in a Phoenix suburb Tuesday to receive free elastic booties to put on their pets’ paws so they don’t burn on concrete and pavement.

Shelby Barnes, 48, picked up three sets of the booties for her dogs. She said she yells at people who walk their dogs without them in the afternoon heat.

“If you can’t put your foot on the sidewalk, neither can they,” she said.