Politics On His 71st Birthday, Trump Is Thrust Into Unifier-in-Chief Role
Politics 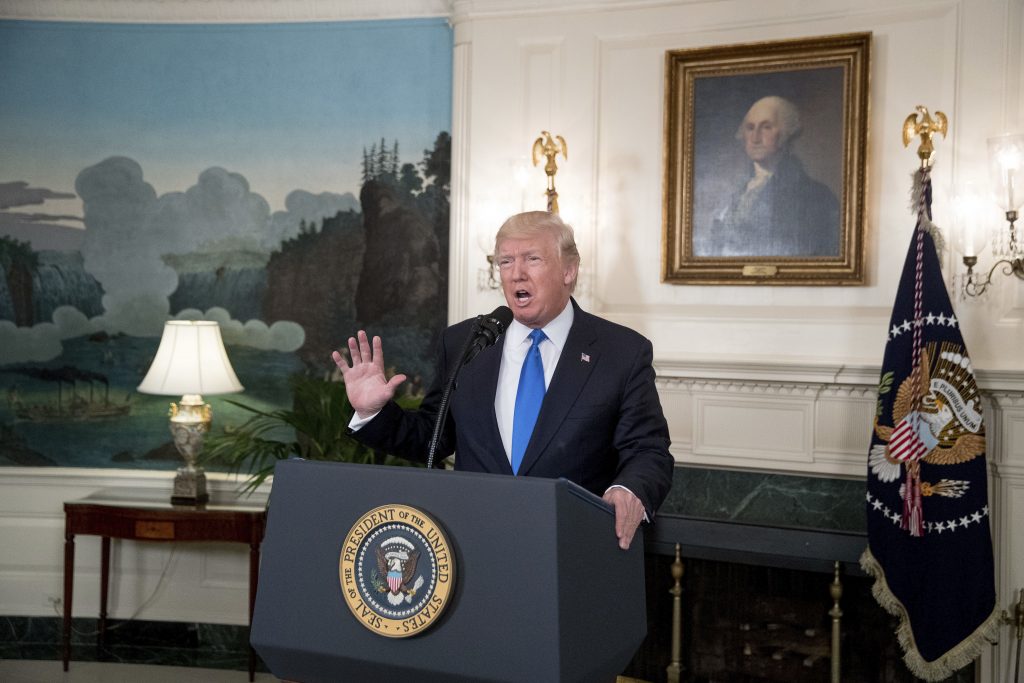 It was supposed to be a quiet morning at the White House as President Donald Trump marked his 71st birthday, with nothing on his public schedule until the late afternoon. But that was shattered by reports that a shooter had opened fire on Republican lawmakers and staff at a baseball practice across the Potomac River in Virginia shortly after 7:00 a.m.

White House staff scrambled to bring details to the president as he watched the developments on TV, including the news that House Majority Whip Steve Scalise, two Capitol Police officers, a staffer and lobbyist were injured.

Trump canceled his scheduled speech at the Department of Labor on Wednesday afternoon (and Vice President Mike Pence canceled a morning speech at the National Association of Home Builders in Washington) as Trump, for the first time as president, was thrust into the role of unifier-in-chief.

Trump delivered a measured message of national unity around four-and-a-half after the shootings – his first address to the country in the immediate aftermath of a major domestic incident.

“We are strongest when we are unified,” the 45th president told the nation.

Trump spoke from the Diplomatic Treaty Room of the White House, putting aside the scandals surrounding his presidency and pursuit of his embattled agenda to inform the country that the shooter, 66-year-old James T. Hodgkinson of Belleville, Ill., had died.

At several points on Tuesday, Trump had labeled congressional Democrats as “obstructionists,” lambasting them for opposing health-care and tax-overhaul legislation that he and his team are writing with congressional Republicans.

“The Democrats have let you down big-league,” he told an audience at a Milwaukee airport on a trip that was part of what the White House planned as “workforce development week.” As he did earlier Tuesday at the start of a health-care meeting with 15 Senate Republicans, Trump said the GOP push for a new law “will get no obstructionist Democratic votes.”

But that combative and partisan tone was gone as he spoke the next day about the shooting at the baseball field in Alexandria, Va., where the Republican baseball team was practicing ahead of Thursday night’s for-charity congressional baseball game.

During a somber four-minute address, the president called for national unity in the wake of the shooting. He did not mention any political party in his remarks.

“We may have our differences, but we do well in times like these to remember that everyone who serves in our nation’s capital is here because, above all, they love our country,” Trump said.

“We can all agree that we are blessed to be Americans, that our children deserve to grow up in a nation of safety and peace, and that we are strongest when we are unified and when we work together for the common good,” the president said.

“Everyone on that field is a public servant,” Trump said, “our courageous police, our congressional aides who work so tirelessly behind the scenes with enormous devotion, and our dedicated members of Congress who represent our people.”

The 44th president, Barack Obama, has lamented the number of times he had to give remarks after mass shootings.

The closest thing to the stage on which Trump was thrust Wednesday morning came after he decided to launch 59 Tomahawk cruise missiles at Assad regime targets in Syria. Late on a Thursday night, the still-new commander in chief explained his decision to the American people in an address from his Mar-a-Lago resort in South Florida.

But on Wednesday, the president found out first hand that the job includes doing things like reassuring the country and providing it with information in the midst of chaotic events, including announcing that the shooter was dead and giving information about Scalise’s condition. (At the time, Scalise was “in stable condition at the hospital,” as Trump announced, though several hours later, MedStar hospital reported that Scalise is now in critical condition.)

Trump called the Louisiana Republican a “friend and a very good friend — he’s a patriot and he’s a fighter.”

Speaking directly to the wounded whip, the president said: “Steve, I want you to know that you have the prayers not only of the entire city behind you, but of an entire nation — and, frankly, the entire world. America is praying for you and American is praying for all of the victims of this terrible shooting.”

The president issued a statement and used Twitter, his preferred form of communication with the American people, in his first comments about the incident earlier Wednesday.

During his first post-domestic-tragedy remarks, the president also praised the officers whom GOP lawmakers present at the scene credited for saving many lives.

“Many lives would have been lost if not for the heroic actions of the two Capitol Police officers who took down the gunman despite sustaining gunshot wounds during a very, very brutal assault,” he said.

“Melania and I are grateful for their heroism,” he said, referring to First Lady Melania Trump, “and praying for the swift recovery of all victims.”