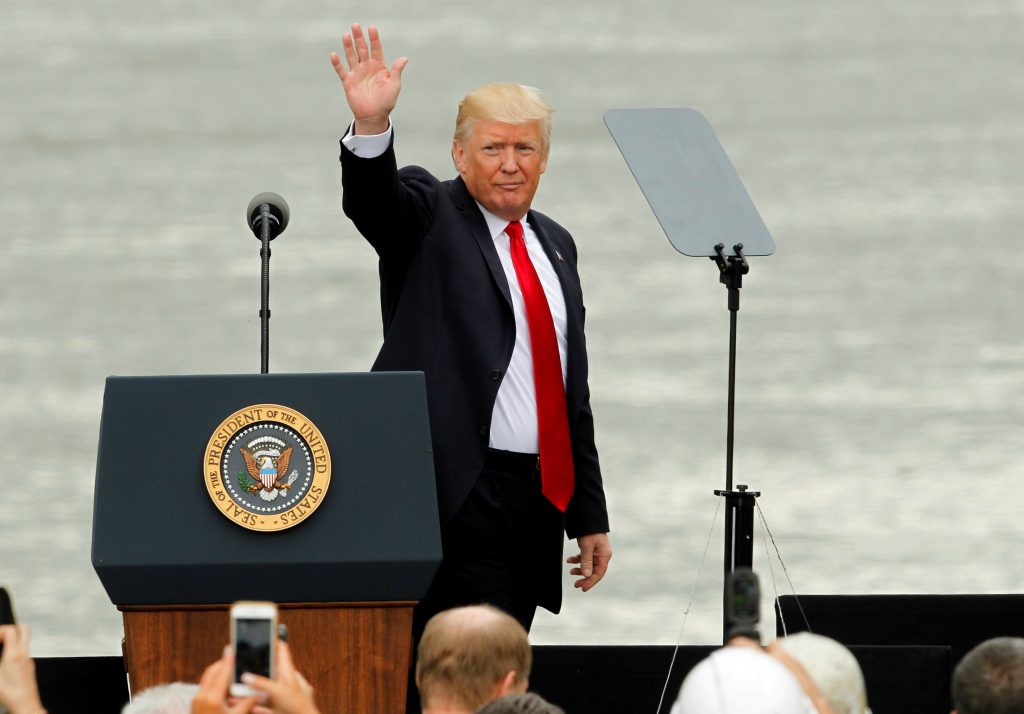 President Donald Trump promised Wednesday to create a “first-class” system of roads, bridges and waterways by using $200 billion in public funds to generate $1 trillion in investment to pay for construction projects that most public officials agree are badly needed and long overdue.

“America must have the best, fastest and most reliable infrastructure anywhere in the world,” Mr. Trump said, pushing his infrastructure plan in middle America as Washington geared up for Thursday’s appearance before Congress by fired FBI Director James Comey.

“We will fix it,” said Trump, standing along the Ohio River. “We will create the first-class infrastructure our country and our people deserve.”

In the speech, the president also pressed the Senate to send him a health-care bill, criticized congressional Democrats as “obstructionists” and revisited his controversial decision to pull the U.S. out of the Paris climate agreement.

Trump said that as he campaigned across the country last year, people often asked him why the U.S. was spending money to rebuild other countries when the roads and bridges they travel on needed rebuilding, too.

Trump declared the days of spending on other nations are over: “It’s time to rebuild our country” and to “put America first,” he said.

While infrastructure initially was seen as an area where Republican and Democrats could work together, Democrats have balked at Trump’s plan for financing improvements, arguing it would result in taxpayer-funded profits for corporations with the cost offloaded on consumers.

Before the speech, Trump met aboard Air Force One with a pair of families the White House said are “victims” of the Obama-era health care law that the president and congressional Republicans want to repeal and replace.

Trump said the families — one from Ohio and another from Kentucky — are going through “turmoil” along with millions of other consumers who are facing rising premiums and limited choices for health coverage under the 2010 law.

“Now it’s time for the Senate to act and save Americans from this catastrophic event because Obamacare is dead,” Trump said. “Obamacare was one of the biggest broken promises in the history of politics. Remember ‘you can keep your doctor, you can keep your plan?’ Didn’t work out that way.”

The Republican-controlled House has passed a health-care bill that no Democrats supported. Senate Republicans are working on their own version.

Trump also raised his announcement last week that he was pulling the U.S. out of what he dismissively referred to as the “so-called” Paris climate accord. Trump has said the pact that nearly 200 nations agreed to in 2015 was unfair to the United States.

Trump said as long as he is president, “we will never have outside forces telling us what to do and how to do it.”

The White House has yet to outline specifics of the infrastructure plan, which it hopes to achieve largely through public-private partnerships. It has proposed funding improvements with $200 billion in public funds over nine years that would theoretically leverage $1 trillion worth of construction.

The White House has billed this week as “infrastructure week” and planned a series of events, beginning with Trump’s push Monday to privatize the nation’s air traffic control system, separating it from the Federal Aviation Administration. That idea, which isn’t new, quickly drew bipartisan opposition.

Trump also planned to discuss infrastructure spending with governors and mayors at the White House on Thursday.

Mike Toohey, president of the Waterways Council Inc, an inland waterways infrastructure advocacy group, said he was pleased to see the president addressing what he called the “silent r” of the transportation system — rivers. Far more attention is usually paid to roadways, railways and runways, he said.

Still, he said the industry is concerned about Trump’s recent budget proposal, which he said could result in higher costs for the commercial users that finance the waterways’ upkeep.