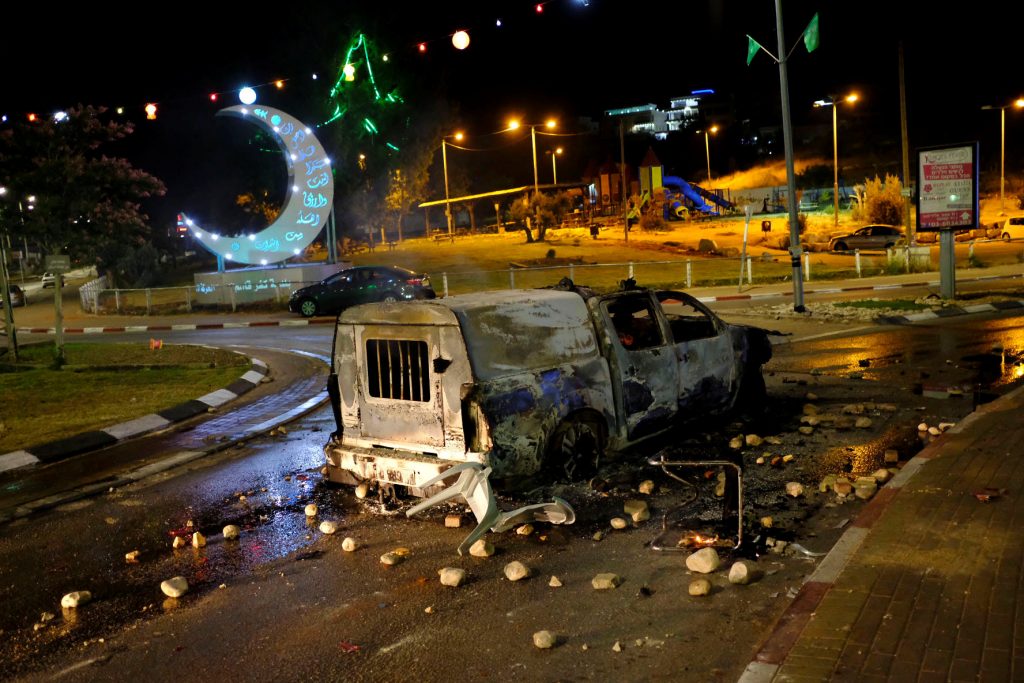 Public Security Minister Gilad Erdan has ordered an investigation into the death of a 21-year-old resident of the Arab town of Kfar Kassem, who died after he was shot during a night of major rioting in the town. While residents claimed that the rioting was due to police violence, Erdan said that this would be investigated, “but nothing justifies violence against police in the manner we saw, in which lawbreakers surrounded and attacked police while they were arresting a wanted suspect.”

What started out as a routine traffic stop quickly degenerated into a riot overnight in Kfar Kassem, in events that led to the death of 21-year-old Mohammed Taha. Taha was shot not by police, but by a civilian volunteer guard who said he was trying to defend himself from rioters. Taha was seriously wounded, and died from his wounds in the early hours of Tuesday.

However, Taha’s death did not spark the riots; those had begun earlier, police said, when at about 11:30 p.m. they stopped a driver in Kfar Kassem, and after examining his license, discovered that there was a warrant out for his arrest.

Police attempted to detain the suspect, but almost immediately a crowd gathered and protested the arrest. The protest turned into a riot, with rocks and stones thrown at police officers, and three police vans set aflame. Police called in backup, and an ever larger crowd gathered, with the rioting becoming more serious.

The rioters moved to the local police station, and rioters attempted to get into the building, presumably to trash it or set it on fire. The civil guard who was inside the building at the time saw the crowd advancing on the building, he later said, and opened fire, hitting Taha.

After nearly an hour, police were able to take control of the situation by using antiriot tactics, including tear gas, water cannons, and other methods. Police said in a statement that throughout the events, they attempted to remain in touch with community leaders and Arab MKs, some of whom came to Kfar Kassem and attempted to calm the situation – to no avail.

After a meeting Tuesday morning, the Arab High Committee, a communal group that purports to speak on behalf of Israeli Arabs, declared that police were guilty of killing Taha, and demanded a full investigation. Schools and businesses were on strike Tuesday, and major protests at key highway junctions are planned for the afternoon rush hour on Tuesday. Police plan to be on full alert at that time, as well as at the funeral of Taha, which is scheduled for Tuesday afternoon.

Arab MKs took the opportunity to list a range of complaints they had about police; MK Ayman Odeh said that “police treat Arabs like the enemy,” while MK Ahmad Tibi said that when it came to giving out traffic tickets and fines, police were quite prominent in Arab communities, but that “the majority of crimes in Kfar Kassem and the entire Arab sector are never solved, leading to feelings of negativity and depression among residents” that lead to explosions such as the one in Kfar Kassem.

Taha was a relative of Arab MK Issawi Frej, who met Tuesday morning with Israel Police chief Roni Alscheich. After the meeting, Frej told Maariv that he and residents of Kfar Kassem were awaiting the findings of the police investigation. “The town is in chaos,” he said. “There are six open murder cases in Kfar Kassem, but instead of dealong with these, police add another murder.” Over the past 18 months, he said, there were 14 murders in Kfar Kassem, the last two – a double murder – taking place last week. “This is what police should be dealing with, not shooting an innocent boy who just recently got married.”