National On Memorial Day, President Hails the Fallen and Their Families
National 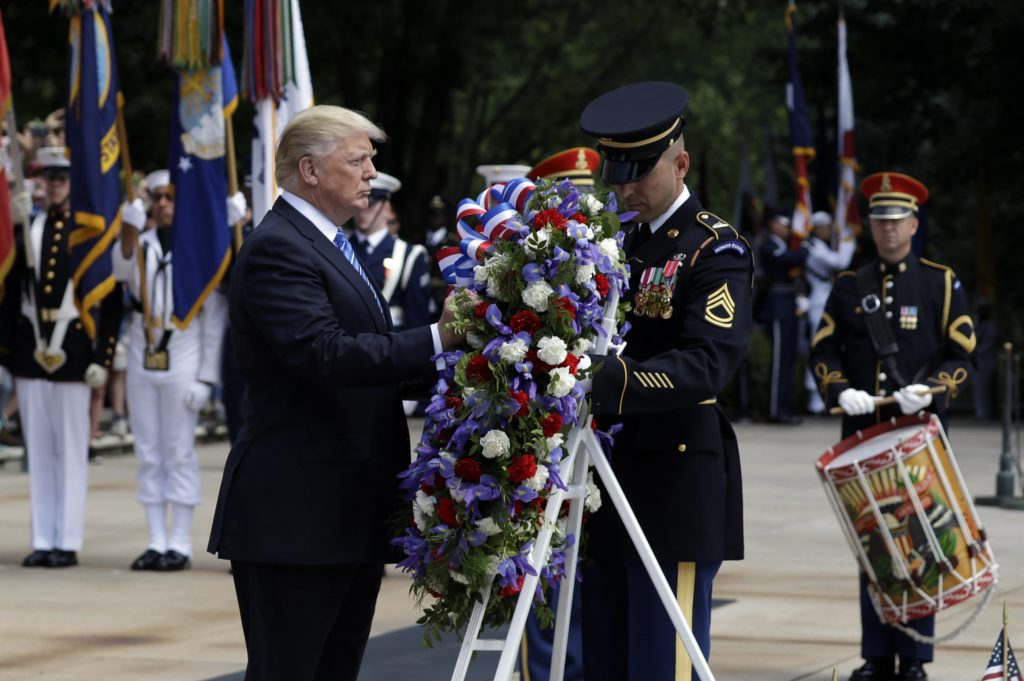 President Donald Trump on Monday expressed the nation’s “boundless” gratitude for the ultimate sacrifice paid by Americans in defense of the United States, dedicating his first Memorial Day address as commander-in-chief to a top Cabinet secretary and two other families who lost loved ones.

Trump also singled out for special mention Homeland Security Secretary John Kelly, a retired Marine lieutenant general whose son, Robert, also a Marine, was killed after he stepped on a land mine while on patrol in southern Afghanistan in November 2010.

Trump addressed Gold Star families, those that have lost loved service members: “They each had their own names, their own stories, their own beautiful dreams. But they were all angels sent to us by G-d and they all share one title in common and that is the title of hero, real heroes.”

“Though they were here only a brief time before G-d called them home, their legacy will endure forever.”

Horton, a sniper sent to Afghanistan in 2011, died in a gun battle with the Taliban near the Pakistan border three months into his deployment. Byers was on his third combat tour and, Trump said, ran through smoke and a hail of bullets to rescue an Afghan soldier when he was killed last November.

Secretary Kelly’s other son, Johnny, is getting ready for his fifth military deployment. A son-in-law, Jake, is a wounded warrior.

“As we honor the brave warriors who gave their lives for ours, spending their last moments on this earth in defense of this country and of its people, words cannot measure the depth of their devotion, the purity of their love or the totality of their courage,” Trump said.

“We only hope that every day we can prove worthy not only of their sacrifice and service, but of the sacrifice made by the families and loved ones they left behind. Special, special people,” he said.

Before the remarks, Trump laid a wreath at the Tomb of the Unknown Soldier, holding his hands on it for a long moment before stepping away. He then rested his hand on his heart as a bugler played “Taps.”

The president was accompanied to Arlington cemetery by Vice President Mike Pence, Defense Secretary Jim Mattis and Gen. Joseph Dunford, chairman of the Joint Chiefs of Staff, as well as a slew of advisers and Cabinet secretaries, including veterans’ chief David Shulkin and housing chief Ben Carson.

After the address, Trump visited a section of the cemetery for U.S. service members killed in the Iraq and Afghanistan wars. The White House said Trump visited the gravesite of Kelly’s son, Robert, who was laid to rest in Section 60.

Accompanied by Pence, Trump walked briefly among the white marble headstones and greeted families, including Brittany Jacobs and her 6-year-old son, Christian, who was dressed like a Marine. Jacobs’ father, Marine Sgt. Christopher Jacobs, died during a training accident in California in 2011.