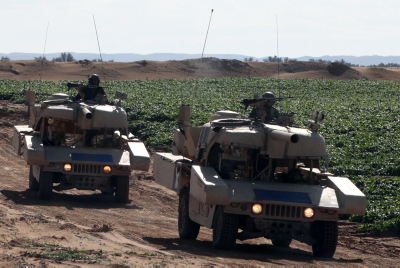 Despite new orders that allow IDF soldiers to open fire on unauthorized individuals who try to enter IDF bases, thefts of equipment by Arabs and Bedouins continue. A report by Channel 4 Thursday said that a gang of Bedouins had managed to steal advanced technological equipment – including a pair of advanced night vision goggles – from an IDF base in southern Israel Wednesday night. The thieves are still at large, and the army has opened an investigation.

The new orders on opening fire were issued last week, as IDF officials expressed concern over the ongoing theft from army bases of weapons, equipment, food and anything else thieves could get their hands on. Soldiers who observe unauthorized personnel fleeing now have the right to open fire on the offending party, and will not be held legally liable if they hit them. Until that rule change was instituted last week, soldiers could not shoot thieves, although they could pursue them and subdue them if they were caught.

“This latest theft shows just how arrogant these gangs are,” said Amichai Yogev of the Regavim organization, which seeks to limit illegal building activity of Bedouins and Arabs throughout Israel. “They impose their fear on everyone, including soldiers, who are prevented from acting against them.” Even if they now have permission to open fire, he said, few soldiers are likely to take a chance and be a “test case,” contending with IDF and civil lawyers who may prosecute them anyway.

According to the new rules, soldiers have a right to open fire on thieves who enter IDF shooting ranges or bases. Soldiers are allowed to shoot at individuals who may have committed a “dangerous act,” such as stealing weapons. However, the new rules may not obviate those already on the books – and who is to say if a situation is “dangerous” enough to warrant action? Therefore, said Yogev, despite the rule change, “unfortunately we will not see any changes in the field, and these thefts are likely to continue.”