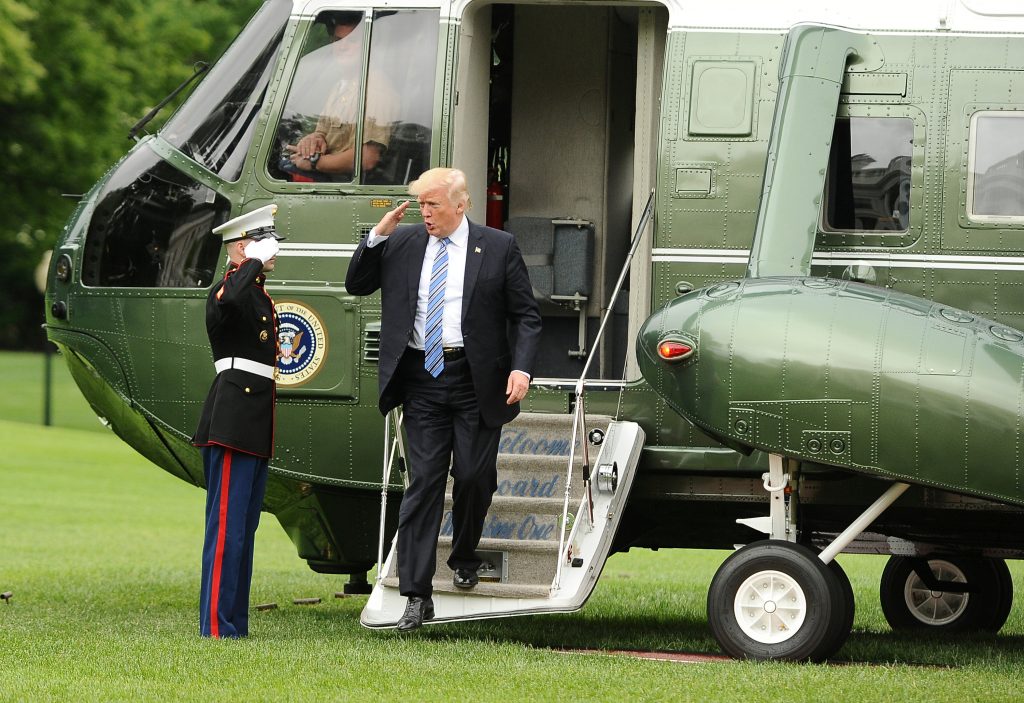 President Donald Trump said Saturday that “we can make a fast decision” on a new FBI director, possibly by late next week, before he leaves on his first foreign trip since taking office.

“Even that is possible,” President Trump told reporters when asked whether he could announce his nominee by Friday, when he is scheduled to leave for the Mideast and Europe.

At least six candidates to be the bureau’s director were in line for the first interviews with Attorney General Jeff Sessions and his deputy, Rod Rosenstein, at Justice Department headquarters. They are among more than a dozen candidates President Trump is considering, a group that includes several lawmakers, attorneys and law enforcement officials.

“I think the process is going to go quickly. Almost all of them are very well-known,” President Trump said aboard the plane that took him to Lynchburg, Virginia, where he gave the commencement address at Liberty University. “They’ve been vetted over their lifetime essentially, but very well-known, highly respected, really talented people. And that’s what we want for the FBI.”

The Trump administration is looking to fill the job, which requires Senate confirmation, after President Trump abruptly fired Director James Comey on Tuesday.

The first candidate to arrive was Alice Fisher, a high-ranking Justice Department official in the George W. Bush administration. She left after about an hour and a half inside the building and declined to comment to reporters.

Among those interviewed was Adam Lee, special agent in charge of the FBI’s Richmond, Virginia, office. Acting FBI Director Andrew McCabe also interviewed for the permanent post despite his repeated willingness to break from White House explanations of Comey’s ouster and its characterizations of the Russia investigation. GOP Sen. John Cornyn, the No. 2 Senate leader and a former Texas attorney general, also interviewed.

Among those expected to interview were Michael J. Garcia, an associate judge on New York’s highest court, and U.S. District Judge Henry E. Hudson, a George W. Bush appointee who struck down the centerpiece of the Obama administration’s health care law in 2010.

Sessions has faced questions over whether his involvement in Comey’s firing violates his pledge to recuse himself from investigations into Russian interference in the election. Some lawmakers have alleged the firing was an effort to stifle that FBI probe.

Justice Department spokeswoman Sarah Isgur Flores said Sessions and Rosenstein are involved in the interviews because the FBI director reports to them as attorney general and deputy attorney general. They can make recommendations, but the president will ultimately make the hiring decision.

Fisher formerly served as assistant attorney general for the Justice Department’s Criminal Division. She faced resistance from Democrats during her confirmation over her alleged participation in discussions about detention policies at the Guantanamo Bay facility in Cuba. She also was deputy special counsel to the Senate special committee that investigated President Bill Clinton’s Whitewater scandal.

The FBI has never had a female director.

Lee, a longtime agent, has worked in a variety of positions within the bureau. Before Comey tapped him to lead the Richmond office in 2014, he was chief of the Public Corruption and Civil Rights Section, investigating some of the highest profile cases against government officials and civil rights violations in recent years.