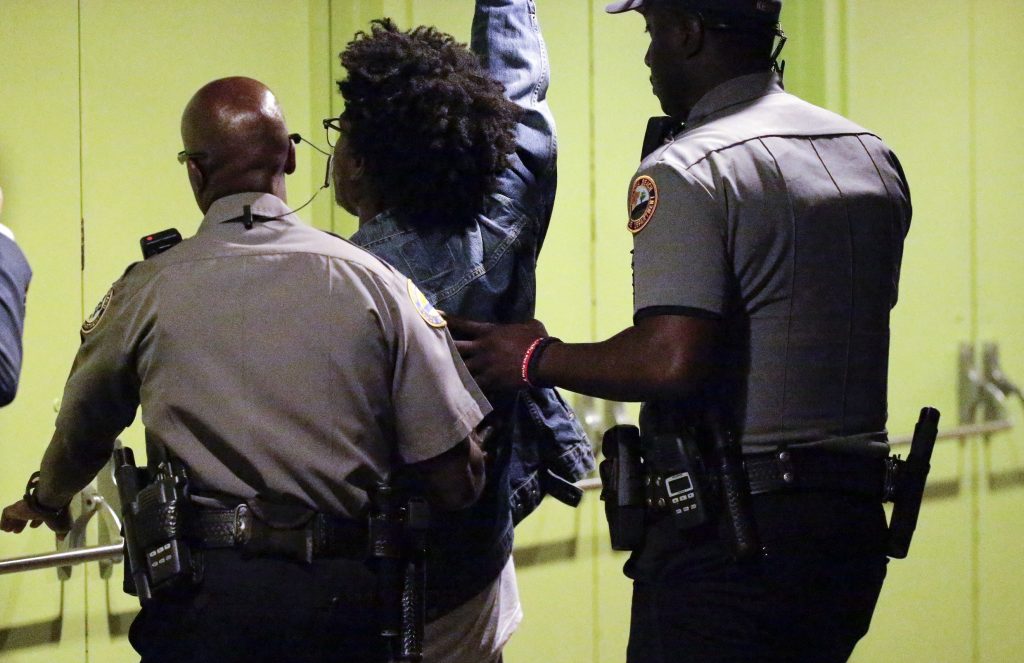 Students booed, and many turned their backs on Education Secretary Betsy DeVos as she gave the keynote address at Bethune-Cookman University’s commencement Wednesday afternoon.

Many students and alumni had objected to having DeVos as speaker in part because they said the outreach by President Donald Trump and the education secretary to historically black schools is an empty gesture. But the president of the university defended her work as a philanthropist and her commitment to education.

Graduates came into the auditorium smiling, many with flowers and other decorations plastered on their mortar boards, and listened to the ceremony politely, until university President Edison Jackson introduced Omarosa Manigault, an adviser to President Trump. Students started booing. Jackson stopped, and said: “You don’t know her. You don’t know her story.”

School leaders at the front of the room and some faculty applauded as he introduced DeVos to give her an honorary doctorate, but many students booed. When she began speaking, thanking Jackson, the room erupted with shouts. DeVos had to raise her voice as she thanked the moms attending the ceremony.

About half the 380 graduates turned their backs on her. Shouts continued as she spoke loudly, saying that one of the hallmarks of higher education and democracy is the ability to converse with and learn from those with whom they disagree.

Jackson warned the students. “Choose which way you want to go,” he said sternly as the disruptions continued.

DeVos resumed speaking, pledging the administration’s support to their success. “I am at the table fighting on your behalf,” she said.

She spoke about the importance of listening to other viewpoints, and noted the increasing polarization so evident on cable news and social media.

“Let’s choose to hear one another out,” she said at one point.

When she spoke about how she would later visit the home and gravesite of the school’s founder, civil rights activist and educator Mary McLeod Bethune, some in the crowd could be heard shouting, “No!”

Tensions had been high for days. On Tuesday, protesters delivered petitions signed by thousands of people demanding that university leaders drop plans to have DeVos speak.

“I was in shock,” said graduating student Jasmine Johnson, describing her reaction when she learned who would address her and her classmates. She said she doesn’t think DeVos — a philanthropist and strong proponent of school choice, private and charter schools — understands public schools, or historically black colleges.

“For someone to come and speak at my commencement that cannot relate to me or know what I have been through is kind of like a slap in the face,” she said. And she worries her student loans will be even more difficult to pay back under the Trump administration’s actions.

Jackson wrote in a letter to the campus community that a willingness to engage with varying viewpoints is a hallmark of higher education. “I am of the belief that it does not benefit our students to suppress voices that we disagree with, or to limit students to only those perspectives that are broadly sanctioned by a specific community,” he wrote. “If our students are robbed of the opportunity to experience and interact with views that may be different from their own, then they will be tremendously less equipped for the demands of democratic citizenship.”

A spokeswoman for the Education Department, Elizabeth Hill, wrote in an email that DeVos “is looking forward to delivering the 2017 Commencement Address at Bethune-Cookman University and to engaging in productive dialogue with the students, faculty, and staff during her visit.

“Commencements are a time to celebrate the graduates, and that’s what she will be focused on while at B-CU on Wednesday.”

The commencement speech, DeVos’ first as education secretary, is the latest effort by Trump and his administration to reach out to historically black colleges. Over the past several months, that outreach has been marked, including an Oval Office meeting with scores of college leaders. And it has at times been awkward, as when DeVos described such schools as pioneers of school choice – words that her opponents repeated often. She has also noted that African Americans had been systemically excluded from quality, or any, education at the time.

On Friday, Trump seemed to signal that a key funding source for such schools might be unconstitutional, startling HBCU leaders who have relied on the funds for decades. On Sunday, he followed that with a statement of “unwavering support” for historically black colleges.

So DeVos’ speech at the Daytona Beach school, which was founded by a civil rights icon, came at a particularly fraught time.

Dominik Whitehead, a 2010 graduate of Bethune-Cookman working as a community organizer and political activist, started a petition online. He said he grew up hearing about the school’s founder, activist and educator Mary McLeod Bethune, whose legacy is honored there. He said he didn’t object to DeVos coming to campus to speak, but felt she was the wrong person to represent the school at commencement.

“Do not use Bethune-Cookman as a photo op,” he said Tuesday, shortly before delivering petitions to the administration building. “Come to the table with something that is going to actually do something, in terms of policy, funding.”