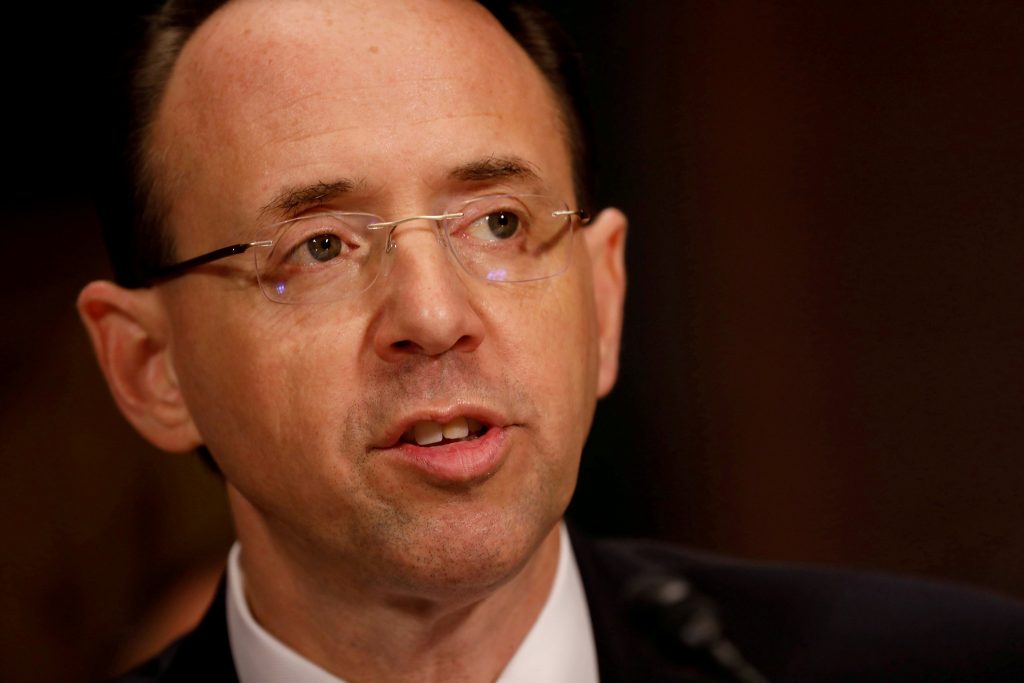 Attorney General Jeff Sessions and his new deputy, Rod Rosenstein, arrived at the White House Monday to talk with President Donald Trump: They had serious concerns about the beleaguered FBI Director James Comey.

Mr. Trump listened to what they had to say in a hastily scheduled meeting and then asked for them to put their reasons in writing.

Rosenstein wrote a scathing three-page memo titled “Restoring Public Confidence in the FBI” about Comey’s botched handling of the high-profile investigation into Hillary Clinton’s emails. That memo was delivered to the White House on Tuesday.

Hours later, Mr. Trump had made his decision: He fired Comey in a terse letter that didn’t mention the Clinton investigation. It was hand-delivered to FBI headquarters by Trump’s longtime bodyguard Keith Schiller, now director of Oval Office operations. He then called 10 members of Congress, including House Speaker Paul Ryan and Senate Majority Leader Mitch McConnell, to inform them of the news that was about to become public.

Sen. Dianne Feinstein, D-Calif., said she was surprised when President Trump called her at 5:30 p.m. to say he was firing Comey on Session’s and Rosenstein’s recommendation because “the department is a mess.” Sen. Lindsey Graham, R-S.C., said Mr. Trump called him to tell him about Rosenstein’s letter and that he thought Comey couldn’t lead the agency.

The account of President Trump’s meeting with Sessions and Rosenstein, which has not been reported previously, was offered by officials familiar with the situation who were not authorized to speak publicly. A White House spokeswoman later supported those details.

The quick action on Comey stands in sharp contrast to the delay after Mr. Trump learned that his national security adviser, retired Army Lt. Gen. Michael Flynn, had lied about his discussions with Russian Ambassador Sergey Kislyak. Acting Attorney General Sally Yates met with White House counsel Donald McGahn twice about the issue, but Mr. Trump only fired Flynn 18 days later, after the news of the Yates-McGahn meeting was reported by The Washington Post.

But White House spokeswoman Sarah Huckabee Sanders said Trump has been considering firing Comey since he was elected in November in part because he went around the chain of command in the Clinton investigation and failed to stop FBI leaks.

“I think it’s been an erosion of confidence,” she said. “I think that Director Comey has shown over the last several months, and frankly, the last year, a lot of missteps and mistakes.”

President Trump had been complimentary of Comey for months after asking him to stay on as FBI director even though he was overseeing an investigation into whether Trump’s presidential campaign had colluded with Russia in the hacking and public release of top Democrats’ private emails.

But those compliments turned to anger as Comey publicly confirmed the collusion investigation and refused to back up the president’s allegation that President Barack Obama had wiretapped his phones. Some say that Mr. Trump had been wanting to fire Comey for at least a week and tasked Sessions with finding a reason after he had grown frustrated with the bad publicity Comey’s investigation had caused.

On May 2, White House press secretary Sean Spicer told the reporters that Mr. Trump “has confidence” in Comey. But on Tuesday, there was a sign that something was amiss.

When Spicer was asked about Comey having overstated to Congress the number of emails Clinton top aide Huma Abedin had forwarded to her husband while she was employed at the State Department, he declined to answer. It was mid-afternoon; Rosenstein’s memo had already reached the White House.

“I haven’t asked him,” Spicer said. “I have not asked the president since the last time we spoke about this … I don’t want to start speaking on behalf of the president without speaking to him first.”

Comey had a long career as a federal prosecutor, rising to deputy attorney general during Republican George W. Bush’s administration. Democrat Barack Obama appointed Comey to a 10-year term leading the FBI in 2013, but Trump had the authority as president to remove him from his job.

The shocking firing came days after Comey asked his new boss, Rosenstein, for additional money and personnel for the bureau’s investigation into Russia’s interference in the presidential election.

“All I know is that I’m told that as soon as Rosenstein arrived, there was a request for additional resources for the investigation, and a few days afterwards he was sacked,” Sen. Dick Durbin, D-Ill. “I have a general conclusion: I think that the Comey operation was breathing down the neck of the Trump campaign and their operatives, and this was an effort to slow down the investigation.”

The White House referred questions about the issue to the Department of Justice, which did not respond to a request for comment.

White House officials said repeatedly this week that Mr. Trump did not ask Rosenstein to investigate Comey, but rather he decided to do that on his own after he was confirmed into office two weeks ago.

Sessions and Rosenstein came to the White House on Monday for other reasons, but Sanders said they asked to speak to President Trump about Comey. She did not know if Trump spoke to them again after that meeting, but Rosenstein sent over the memo, which assailed Comey’s unorthodox decision last July to publicly announce that he would not recommend criminal charges against Clinton.

The White House was ill-prepared for the barrage of criticism it received from members of both parties to the firing that made it appear that the dismissal was a result of the Russia investigation. The dismissal occurred as investigators closed in on several former Trump aides who had contacts with Russia at a time when U.S. intelligence agencies say the Kremlin hacked Democrats to help Trump win the White House.

Vice President Mike Pence engaged in a round of interviews Wednesday to assert that the firing had nothing to do with the Russia probe.

“That is not what this is about,” Pence told NBC News. “The president took strong and decisive leadership here. To put the safety and security of the American people first. It was simply the right decision.”

Still, Democrats and some Republicans called for an independent investigation into Russia while others called for Sessions to resign or President Trump to be impeached. Hundreds of people, including Democratic National Committee chairman Tom Perez, gathered outside the White House to call for a special investigation.