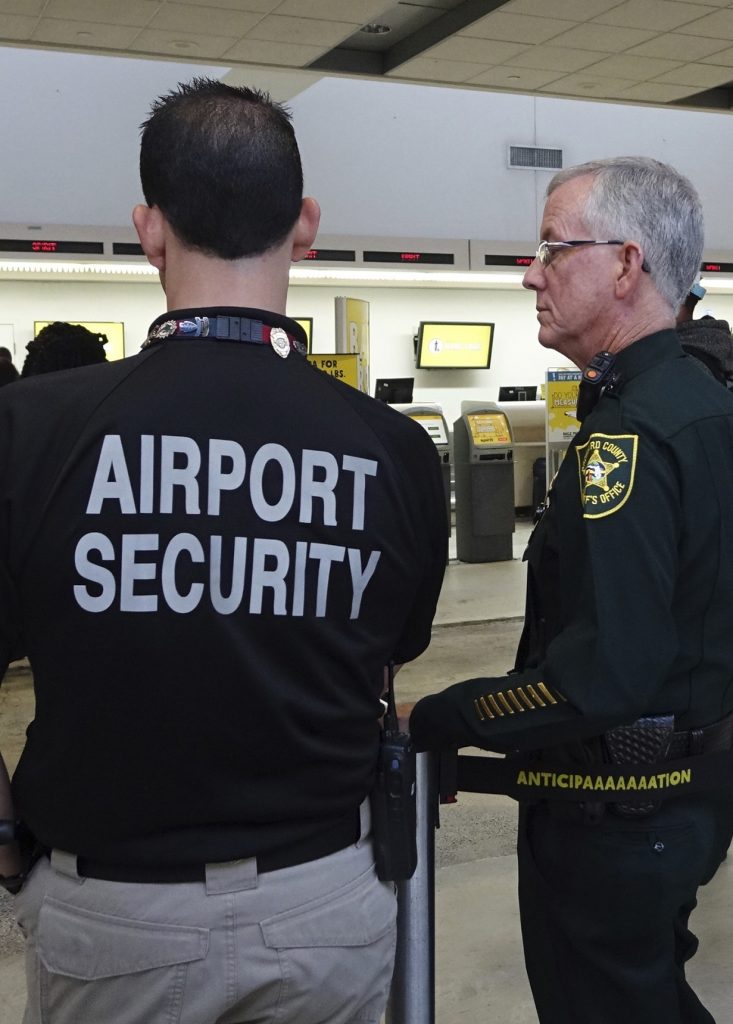 Irate passengers swarmed ticket counters and some started a near-riot at Fort Lauderdale airport after Spirit Airlines canceled nine flights, blaming the decision on pilots’ failure to show up.

The Broward Sheriff’s Office said about 500 people were crowded into Spirit’s terminal at Fort Lauderdale-Hollywood International Airport late Monday night after the airline canceled the flights because there were no pilots. Video posted online showed deputies grappling with screaming passengers and breaking up fights.

The discount airline says pilots are refusing to pick up open flying assignments, which Spirit claims is an illegal and concerted plot by the Air Line Pilots Association to apply pressure during contract negotiations. It has filed a lawsuit, saying it has had to cancel about 300 flights nationally and internationally over the past week because of the union’s actions. Another 36 were canceled Tuesday.

Federal District Judge William P. Dimitrouleas issued a temporary restraining order against the union Tuesday, ordering its member pilots to not engage in any boycotts or slowdown, saying that would violate federal law.

Spirit spokesman Paul Berry issued a statement apologizing to customers and saying the company is “shocked and saddened” by the Fort Lauderdale melee.

“We believe this is the result of intimidation tactics by a limited number of our pilots affecting the behavior of the larger group,” Berry said.

The union has denied the accusation, but said in a statement that its members will obey the judge’s order with the goal of helping Spirit resume normal operations.

Sheriff’s reports released Tuesday say 22-year-old Desmond Waul of Selden and 24-year-old Janice Waul and 22 year-old Davante Garrett, both of Brentwood, were seen by deputies threatening the airline’s front counter employees. Deputies said their actions caused the crowd to become increasingly aggressive to the point of near-violence and that they wouldn’t leave when ordered. When deputies tried to arrest them, they said the three threatened them and resisted efforts to handcuff them.

They were being held Tuesday at the Broward jail in lieu of $10,000 bond each. It’s unclear whether they have lawyers.

Jennifer Glann said at the airport Tuesday that she was in the crowd Monday night, trying to get home to New Haven, Connecticut. She said conditions were “awful” and “horrible.”

“There was nowhere to stand, nowhere to sit,” she said. Employees were forcing people to go outside, she said. Soon, scuffles started. “People were getting arrested left and right.”

Paul Yankowitz of Newark, New Jersey, said he tried to remain calm as the crowd became enraged. He didn’t think the cancellations were worth getting angry about.

Fort Lauderdale airport was the scene of a mass shooting in January that killed five people and wounded six. That incident occurred in another terminal on the opposite side of the airport.

Airport spokesman Greg Meyer said Tuesday that the airport staff has added security agents and other staff at the terminal to help Spirit. He said passengers are often anxious before flying, so any serious disruption can aggravate matters. Three more flights were canceled Tuesday.

“For many people, airline travel is very challenging. A lot of people don’t do it frequently, so they are nervous anyway. When your flight is canceled and you need to be somewhere at a certain time it is an imposition and we understand that. The airport tries to work with our airline partner to work with our passengers,” Meyer said.