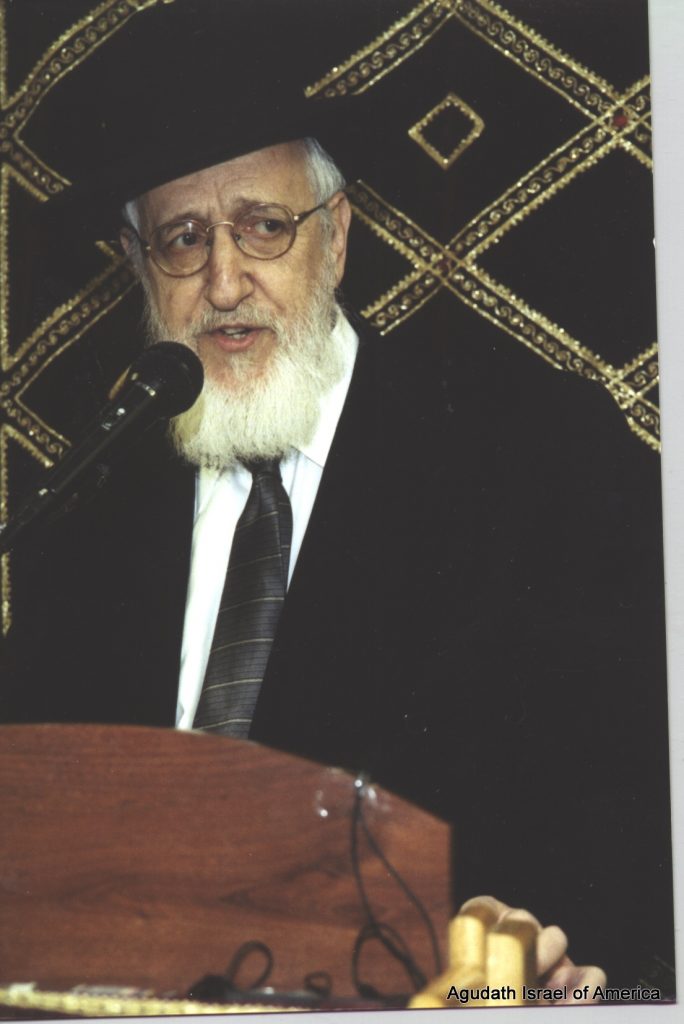 Rabbi Nisson Wolpin, z”l, a pioneer of Torah journalism who worked closely with gedolei Yisrael for decades in his position at the helm of the Jewish Observer magazine, was niftar late Monday night, 29 Nisan. He was 85 years old.

When Rabbi Wolpin was initially approached by Rabbi Moshe Sherer, z”l, and Dr. Ernst L. Bodenheimer, z”l, to become editor of the Jewish Observer, he was reluctant to leave what had been a very successful career in chinuch. Yet, when he put the matter before Harav Yaakov Kamenetsky zt”l, the Gadol encouraged him to accept the offer, telling him, “You will still be working in chinuch,” albeit for a different age group. It was with that earnest sense of responsibility that Rabbi Wolpin approached the task of stewarding the magazine, ensuring that its content was professionally presented, engaging, and an accurate reflection of hashkafos haTorah.

“He was an ish emes, who looked for the truth and would not budge from it,” his brother Rabbi Dovid Wolpin told Hamodia. “He had a very sharp mind and was not a naïve person in the least, but he was completely mevatel himself to daas Torah; he accepted what the gedolei Yisrael had to say and accepted criticism graciously because he really meant all that he did l’shem Shamayim.”

Nisson Wolpin was born in 1932 in Seattle, Washington. His father, Reb Efriam Ben Tzion, z”l, a hailed from the city of Pinsk, Belarus, and had studied in Yeshivas Yitzchok Elchonon, then on the Lower East Side, before accepting a position as a melamed in Seattle. His mother, Mrs. Kaila Wolpin, a”h, was born in Ukraine and immigrated to the U.S. with her father who led a shul in Brownsville for many years.

In those days, Seattle did not yet have a Jewish day school, and so the Wolpin brothers attended public school by day and studied in a Talmud Torah in the late afternoon. Despite the limited hours of operation, the Talmud Torah offered a serious atmosphere for learning and catered to many frum families. Among young Nisson’s rebbeim was Reb Baruch Shapiro, z”l, a talmid of the Rogatchover Gaon, zt”l, and the Ohr Somayach, zt”l.

At 15, Rabbi Wolpin was enrolled in Mesivta Torah Vodaath where he spent many years engaged in tremendous growth in Torah and yiras Shamayim. The menahel Harav Shraga Feivel Mendlowitz, zt”l, emphasized hashkafah and duty to Klal Yisrael, and the young talmid from Seattle was deeply influenced. The message and ruach of Mesivta Torah Vodaath played a significant role in determining Rabbi Wolpin’s life’s mission. He also formed long-lasting bonds with both Harav Yaakov Kamenetsky, zt”l, and Harav Gedalia Schorr, zt”l.

In 1952, Rabbi Wolpin joined a small group of elite talmidim of the yeshivah who traveled to Los Angeles to strengthen a mosad that was founded by Harav Simchah Wasserman, zt”l. Upon his return, he joined Bais Medrash Elyon in Monsey where he studied together with many future gedolei Yisrael and prominent marbitzei Torah.

He married Devorah Cohen, the daughter of Reb Mayer, z”l, and Mrs. Yospa Cohen, a”h, who then lived in Ottawa, Canada. The couple spent a short time in Williamsburg where Rabbi Wolpin worked as a dorm counselor in Torah Vodaath and later moved to Scranton, Pennsylvania, where he taught in the local day school.

Knowing Rabbi Wolpin’s merits from his time together with him in Bais Medrash Elyon, and noting his success as a mechanach, in 1958 he was asked by Harav Yehoshua Geldzheler, zt”l, to join Yeshivas Ohr Yisrael, the cheder the latter founded in Forest Hills, Queens.

In 1970, Rabbi Wolpin assumed the position of editor of the Jewish Observer under the auspices of the Agudath Israel of America. “The JO quickly became the flagship publication of the Torah world, and thousands of Jewish families awaited its arrival each month to read the guidance of Gedolei Klal Yisrael, and the thoughts of its many accomplished writers,” said the Agudah in a statement mourning Rabbi Wolpin’s petirah. “Under Rabbi Wolpin’s discerning and demanding eye, the periodical became the archetype of Torah-hashkafah married to excellent writing. That remained the magazine’s standard over the nearly 400 issues it published.”

He gave many long and late hours to the publication working with his staff of writers, editorial board, and gedolei Yisrael with whom he was in constant contact for guidance on the magazine’s content. Writers who worked with Rabbi Wolpin recalled that his editorial comments on submissions were insightful and he found ways to skillfully and subtly emphasize the message of the article.

His prominent position and access to the leaders of Klal Yisrael did not change Rabbi Wolpin’s low-key personality.

“Being an editor is not an easy job, but he was consistently held in high regard and loved by the many people he worked with,” said Rabbi Dovid Wolpin. “He was willing to do what he needed to to fulfill the mission of the magazine. But, as public of a job as that was, he did whatever he could to stay out of the lime light. It’s a very unusual combination.”

The Wolpin home had open doors to many in need of a warm meal, a kind word, or a bed to sleep in. Many individuals and families were touched deeply by the quiet chassadim of Rabbi and Mrs. Wolpin.

Since leaving his position at the Jewish Observer in 2008, Rabbi Wolpin began spending the vast majority of his time in the beis medrash, learning with various chavrusos. In 2010, the Wolpins moved to Eretz Yisrael where several of their children live.

The levayah was held on Tuesday in Yerushalayim and kevurah took place on Har Hazeisim.