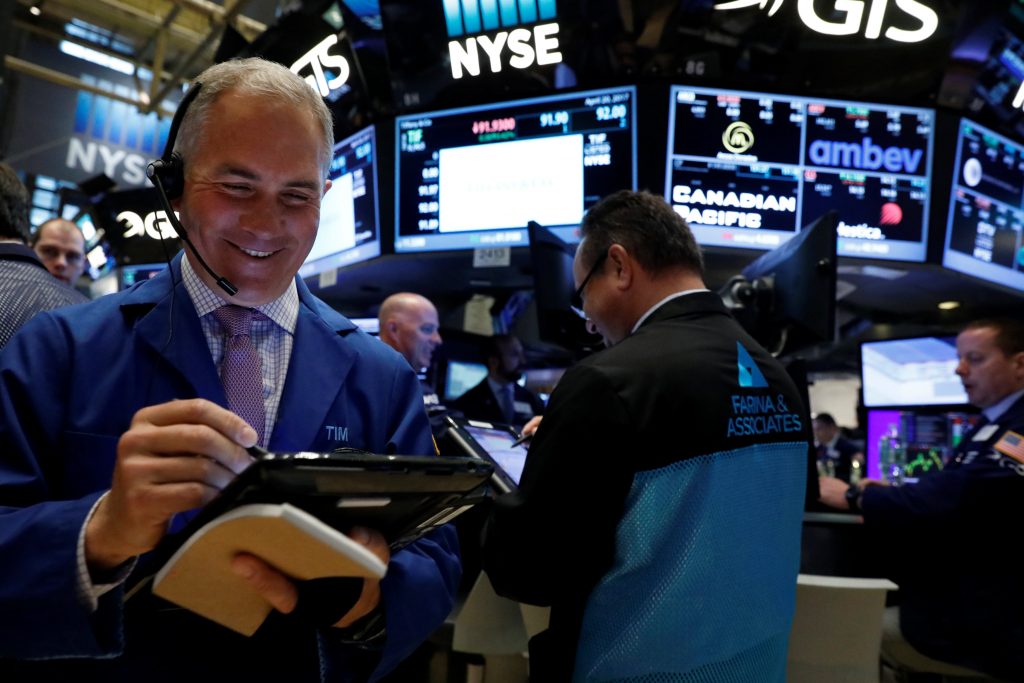 Stocks have bounced around for more than a week. They started higher Wednesday morning, but wound up mostly lower as investors were disappointed by an afternoon report from the Federal Reserve that showed only modest growth in wages. Investors have been hoping that higher wage growth will lead to more spending and economic expansion.

TRAIN KEPT A ROLLING: Railroad company CSX announced a bigger profit and more revenue than Wall Street expected in the first quarter. CSX also said restructuring and spending cuts will increase its profit by about 25 percent this year. The company is cutting jobs and reorganizing after it hired Hunter Harrison, former head of Canadian Pacific, as its new CEO last month. The company also said it will buy back more stock and raise its dividend. CSX stock jumped $43.19, or 6.8 percent, to $50.12.

PRETTY COLORS: Sherwin-Williams raised its profit guidance for the year as paint sales jumped and prices increased. The stock added $11.86, or 3.8 percent, to $323.40. That helped basic materials companies. So did steel maker Nucor, which rose 2.7 percent after its first-quarter results were stronger than expected.

THE QUOTE: It’s still early in this round of company earnings reports, but experts and investors are encouraged that companies are feeling good about the economy.

“The major takeaway so far to earnings season is the CEOs are still saying we’re poised for growth,” said J.J. Kinahan, chief market strategist at TD Ameritrade. “Last quarter was sort of the first time we heard this theme.”

ANY BIDDERS? EBay sagged as investors didn’t find much to like in its first-quarter results. The online commerce company’s profit and sales were about equal to analyst estimates, but analysts took a cautious stance on the company’s spending and its plans; and the stock gave up 93 cents, or 2.7 percent, to $33.92.

GIVING CREDIT: American Express had a solid first quarter as its credit card members spent more and kept bigger balances on their cards. The stock gained $4.13, or 5.5 percent, to $79.68 as financial companies rallied Thursday. SLM Corp., the parent of the student lender Sallie Mae, reported much stronger revenue than expected; and its stock climbed $1.09, or 9.5 percent, to $12.62. Citizens Financial rose 2.7 percent, and private equity firm BlackStone rose 1.5 percent after their respective reports.

“The banks are the shining star,” said Kinahan, although he speculated that Goldman Sachs had a down quarter because it’s lost several top executives to the Trump administration.

GET YOUR DEPOSIT BACK: Equipment rental company United Rentals flopped after its sales fell far short of expectations. The company said rental rates are still somewhat weak, and its stock lost $5.97, or 5 percent, to $113.48.

OVERSEAS: Paris’ CAC 40 jumped 1.5 percent as traders bet on a growing likelihood of a victory for centrist Emmanuel Macron in the upcoming presidential election. Polls have long showed a tight race between four candidates ahead of the first round of voting Sunday. The DAX in Germany and the FTSE 100 of Britain both added 0.1 percent. The benchmark Nikkei 225 in Japan finished little changed, and the Kospi in South Korea rose 0.5 percent. Hong Kong’s Hang Seng index climbed 0.9 percent.