National OPINION: Trump Has a Strategy for Destroying IS — and It’s Working
National 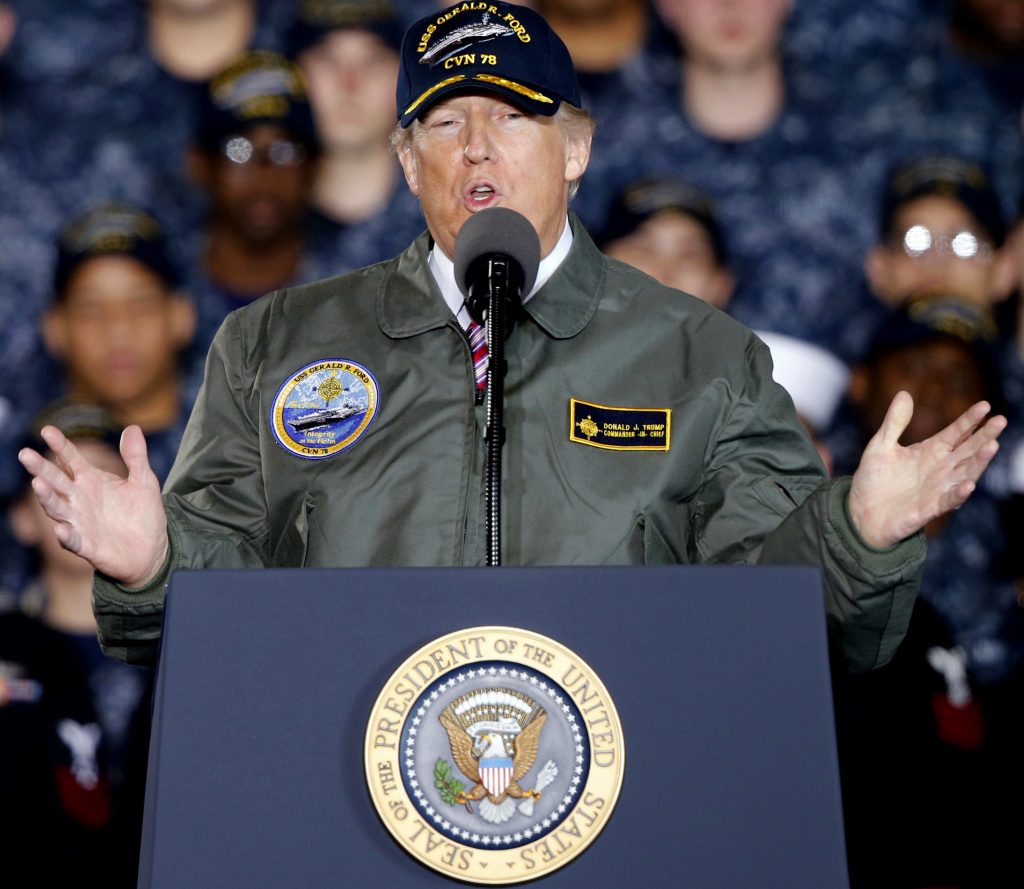 Defeating the Islamic State was candidate Trump’s top national-security priority, one of the few policy issues on which he was consistent. While his claim to have a secret plan — and that keeping it secret was good strategy — was risible to national security experts, his policy goals were and are consistent. American effort should focus on fighting the Islamic State. Regime change to push Bashar al-Assad out of power was not only a lesser objective, but counterproductive to a stable end-state for Syria that prevents terrorism and too costly given Russia and Iran’s support for the regime. Stability is to be prioritized over humanitarian relief or democracy promotion. Russia is to be palliated, their interests supported.

He proclaimed that “we are going to convene my top generals and give them a simple instruction. They will have 30 days to submit to the Oval Office a plan for soundly and quickly defeating ISIS.” While strictly speaking that deadline has passed without apparent formal approval, the Departments of State and Defense have indeed been prioritizing defeating the Islamic State. Secretary of State Rex Tillerson made his first big international event the gathering of the coalition fighting the Islamic State, reinforcing the president’s twin messages that it is the administration’s top national-security priority, and that “the United States will increase our pressure on ISIS and al-Qaeda and will work to establish interim zones of stability, through ceasefires, to allow refugees to return home.”

Secretary of Defense James Mattis met early with Middle Eastern partners and has taken a number of decisions that look to strengthen forces in the fight: increasing the number of American servicemen and women in Iraq and Syria, reinterpreting the advise-and-assist mission to put U.S. forces closer to the front, parachuting U.S. forces in to sever routes around Mosul, getting presidential approval for greater delegation of authority for operations, and further delegating that authority to commanders.

To many observers, the emerging approach looks like the Obama strategy, only better resourced. This is especially true of Democrats, but not only — conservative stalwarts Kimberly and Fred Kagan make the same criticism in their American Enterprise Institute report on Syria.

I have the sense the administration actually is making a departure from the Obama approach, and sees bigger game afoot. The White House may not yet have formally agreed on an anti-Islamic State strategy, but their incremental choices are adding up to a coherent approach that departs from the Obama approach in four important ways.

First, they are prioritizing speed. President Obama’s strategy envisioned a years-long campaign to defeat the Islamic State. While that approach had the advantage of affixing responsibility for outcomes on the countries of the region and incentivized them to develop the governing capacity essential to stabilizing the territory once regained, it paid the very steep price of humanitarian disaster for Iraqis and Syrians in the Islamic State’s control, escalating pressure on surrounding governments taking in refugees and buffeted by violence, decimation of moderate opposition within Syria, further radicalization within Western societies, and disaffection for our efforts by publics in the region. As Tillerson said, “Our end goal in this phase is the regional elimination of ISIS through military force.” The choices President Trump has made are dramatically picking up the pace of operations. So much so that some have begun to worry we will be the victims of battlefield success, winning before we have stabilization alliances and forces in place.

Second, they are committing the United States to a long-term involvement. President Obama prioritized minimization — leaving responsibility for the victory and subsequent stabilization to local allies. He patronizingly said, “We can’t want it more than they do,” as though desire and capacity were one and the same, [and] turned a cold shoulder on both territory and governance slipping away from Baghdad. By contrast, Mattis and Joint Chiefs Chairman Gen. Joseph Dunford both said flat out in congressional testimony that unlike the Obama administration’s accelerated withdrawal from the region, after the Islamic State fight concludes, the United States would leave troops in Iraq for a long period of time. Signaling our commitment to outcomes rather than imposing arbitrary timelines is a significant change in approach, one providing desperately needed assurance to those who share our objectives.

Third, they are clear about the priority being assisting the countries we want to win the wars now underway. The White House is less conflicted than the Obama administration about authoritarian tendencies, civilian casualties, and domestic human rights records of Egypt, Saudi Arabia, Bahrain, and other countries fighting insurgent upheavals and Iranian destabilization in the Middle East. They have unambiguously chosen a side in the fight. And while that will create qualms among many about the domestic and warfighting choices of those countries, strategy is impossible without setting priorities. Stable states working with us to stamp out terrorism is this administration’s priority for the Middle East. As Tillerson said at the coalition meeting, “When everything is a priority, nothing is a priority. We must continue to keep our focus on the most urgent matter at hand.”

Fourth, they are laying the foundation for an anti-Iran coalition once the Islamic State problem has been solved. While making concessions on many things, the Obama administration had been inflexible or unclear as to the basis for compromise with regional allies that had been stymieing our campaign to defeat Islamic State. While the Trump administration does not yet appear to have found a formula for agreement with Turkey over the role of Kurdish forces in retaking Raqqa, on most other issues they do appear to have reached consensus with regional allies. The pivot to pushing back on Iran may come as an unwelcome surprise to the NATO allies and others gathered around Tillerson in Washington last week, but it is a shrewd positioning. And another way to describe shrewd positioning is good strategy.