National FOCUS: Two Months Out of Office, Obama is Having a Post-Presidency Like No Other
National 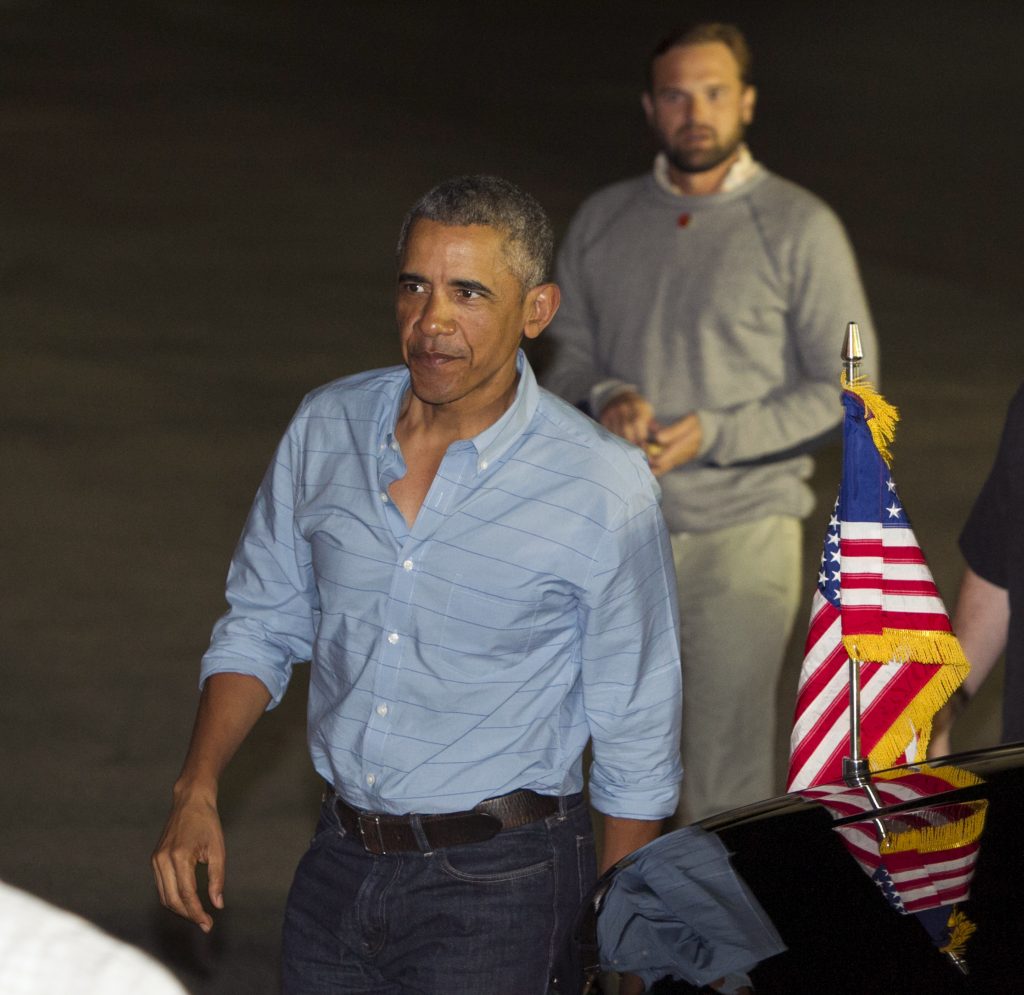 The first cocktail party at Barack Obama’s new office last month was certainly more casual than any he had hosted in recent years. The wine bore a random assortment of labels, as if assembled potluck-style. The self-serve appetizers were set out in the narrow hallway. The host, tieless, eschewed formal remarks, as a few dozen of his old administration officials – Joe Biden and former chief of staff Denis McDonough, as well as more junior ones – mingled in a minimalist wood-paneled suite that could be mistaken for a boutique law firm.

“It was a bit of a shock to the system,” said Peter Velz, who used to work in the White House communications office. “You’re bumping up right against the vice president as he’s getting cheese from the cheese plate.”

As the dinner hour drew near, the former president exited with a familiar excuse, Velz recalled: “He was joking that if he doesn’t get back to Michelle, he’s going to be in trouble.”

So far, Obama is trying to approach his post-presidency in the same way as his cocktail-hosting duties – keeping things low-key, despite clamoring from Democrats for him to do more. “He is enjoying a lower profile where he can relax, reflect and enjoy his family and friends,” said his former senior adviser Valerie Jarrett.

But the unprecedented nature of this particular post-presidency means his respite could be brief. Even while taking some downtime at a luxurious resort in the South Pacific last week, Obama put out a statement urging Republicans not to unilaterally dismantle his signature health care law.

Not only are the Obamas still young and unusually popular for a post-White House couple, their decision to stay in Washington while their younger daughter finishes high school has combined with the compulsion of the new Trump administration to keep pulling them back into the spotlight.

President Donald Trump has repeatedly invoked his predecessor to blame him for the “mess” he says he inherited: “jobs pouring out of the country,” “major problems” in the Middle East and North Korea. A post-election show of camaraderie has ended; the two have not spoken since Trump took office.

Trump dropped any remaining veneer of politeness this month with a series of tweets accusing Obama – without offering evidence – of illegally surveilling Trump Tower during the campaign. Obama was privately irritated at the allegation, which the director of the FBI and lawmakers from both parties dismissed as unfounded.

He has attempted to stay above the fray, watching from the sidelines as Republicans have pressed to unravel a slew of his initiatives – and emphasizing the need for a new generation of political leaders to step up in his place.

And yet, while other recent ex-presidents have devoted their retirement years to apolitical, do-gooder causes, Obama is gearing up to throw himself into the wonky and highly partisan issue of redistricting, with the goal of reversing the electoral declines Democrats experienced under his watch.

Both the continued interest in Obama, and his desire to remain engaged in civic life, place him in an unusual position for a former president. George W. Bush left office with low approval rates, retreating to Dallas to write a memoir and take up painting. Bill Clinton decamped for New York on a somewhat higher note politically but downshifted to a mission of building his family’s foundation and supporting his wife’s political career.

Can the Obamas put their heads down and build their ambitious presidential center while living only blocks from the White House? Or is it inevitable that he will get pulled back into the political swamp?

Paparazzi wait outside of an exercise studio that Michelle Obama frequents, though she clearly does not appear interested in being photographed.

“They are still decompressing from an extremely intense period. It actually started not just eight years ago but really since his 2004 convention speech – and it never let up,” said a former senior West Wing staffer. “It’s like 12 years of extremely intense stress, political activity, scrutiny, responsibility as a national leader, and for the first lady as the surrogate in chief. … That’s been a big load for the both of them.”

To escape the spotlight, the Obamas have taken multiple vacations since leaving the White House – to Palm Springs, the Caribbean and Hawaii. After meeting with tech executives about his presidential center recently, Obama headed to Oahu, where he golfed with friends and dined at a steakhouse in Kailua.

Three days later he jetted off in a Gulfstream G550 to Tetiaroa, a South Pacific island. He plans an extended stay there to start writing his White House memoir, according to a person familiar with his plans who asked for anonymity to discuss them.

His whereabouts have been obsessively scrutinized. The conservative Independent Journal Review hinted at some murky connection between Obama’s Oahu visit and a Hawaii federal court ruling putting a temporary stay on Trump’s latest travel ban; the conspiratorial story was later retracted. At a GOP dinner, Rep. Mike Kelly, R-Pa., declared that Obama stayed in Washington “to run the shadow government that is going to totally upset the new agenda.” (Kelly later played down his claim.)

Trump, meanwhile, has kept his distance. Before he took office, the new president said he intended to seek Obama’s counsel in the future, but he has not. Trump called once to thank Obama for the letter left in his desk, a pleasant tradition among presidents, but Obama was traveling at the time, according to an individual familiar with the exchange. When Obama returned the call, Trump conveyed his thanks through an aide but said there was no need to get Obama on the phone.

Few believe the Obamas plan to stay in Washington beyond their daughter Sasha’s 2019 graduation from Sidwell Friends School. “People admire and respect the decision that Barack and Michelle Obama made as parents to minimize the disruption to their children,” former vice president Al Gore told The Washington Post. “When I left my job in the White House, my kids were out of high school. If they had still been in grade school or high school, I might have well made the decision to stay in the city.”

When Obama has been in town, he has not been much of a public presence. Both he and the former first lady have entertained friends in their Kalorama home, newly redecorated to suit their modern style; and both frequently go into their new West End office space.

About 15 staffers work there, with the framed flag that the Navy SEALs who killed Osama bin Laden presented to the former president displayed in the entryway. One floor of the new office houses aides, including Jarrett, who are helping to build Obama’s foundation, which is headquartered in Chicago.

For now, Obama is delegating political work to associates – notably former attorney general Eric Holder, whom he has tapped to lead the redistricting project that aims to help Democrats redraw legislative maps that many see as tilted toward the GOP. He also endorsed Tom Perez, his former secretary of labor, in a successful bid to become chairman of the Democratic National Committee. His first major speech as a private citizen will come in May, where he will be awarded a Medal of Courage as part of a celebration of President John F. Kennedy’s centennial.

Michelle Obama, who has a team of four staffers in the office, is spending more time than her husband in Washington, working on her own post-White House book while remaining focused on the home front.

“She’s got one daughter to get off to college, another is a (sophomore) in high school. All of that comes first,” said Tina Tchen, her White House chief of staff. “Now she will also be working on the book and still keeping up her engagement with the community as she always has.”

Her first forays back into public have been visits to D.C. public schools in predominantly minority neighborhoods. These visits have drawn extra attention, perhaps because Melania Trump has held very few public events so far.

Michelle Obama marked International Women’s Day this month by visiting the Cardozo Education Campus and praising its program for recent immigrants. Without mentioning Trump by name, it seemed to be a swipe at his immigration policies.

“She’s deliberate. She likes to be strategic,” said Jocelyn Frye, who attended Harvard Law with the former first lady and served as her first White House policy director. “She doesn’t just do stuff by the seat of her pants.”

Unlike other former first couples, the Obamas do not necessarily have to take to a podium to make a statement. They know their every public movement is plumbed for meaning.

Caught in glimpses over the past few weeks, they appeared relatively rested and refreshed, even as they continue to decompress.

They joined their close friends Anita Blanchard and Marty Nesbitt at the National Gallery of Art to see an exhibit of Chicago artist Theaster Gates’s unique work – installations constructed from pieces of demolished buildings from African American communities.

Gallery director Earl “Rusty” Powell Powell described it as a “casual Sunday afternoon visit” – but someone alerted the Associated Press, which stationed a photographer outside to capture them as they emerged.

Obama was similarly “relaxed and calm” when he dropped in on a Chicago meeting with community organizers planning his future presidential library, according to participant Torrey Barrett.

“When he saw me, it wasn’t a traditional handshake,” said Barrett, founder and CEO of the KLEO Community Family Life Center, which sits near the library site. “It was actually a dap, where we shook hands and patted on the back at the same time. … He said he and Michelle’s main priority now is to make sure the library happens.”

When the group posed for a photo with Obama, the Rev. Richard Tolliver, who has known him since his days in the Illinois legislature, stood to his old friend’s right.

“I had my arm around his back and he had his arm around mine,” Tolliver recalled. “I reminded him that the last time I tried to hug him, the Secret Service snatched my arm away. We laughed. He didn’t come off as stiff and formal, projecting the authority of his former office.”

But even in retirement, Obama was in a hurry. After 15 minutes, he rushed off to another engagement.