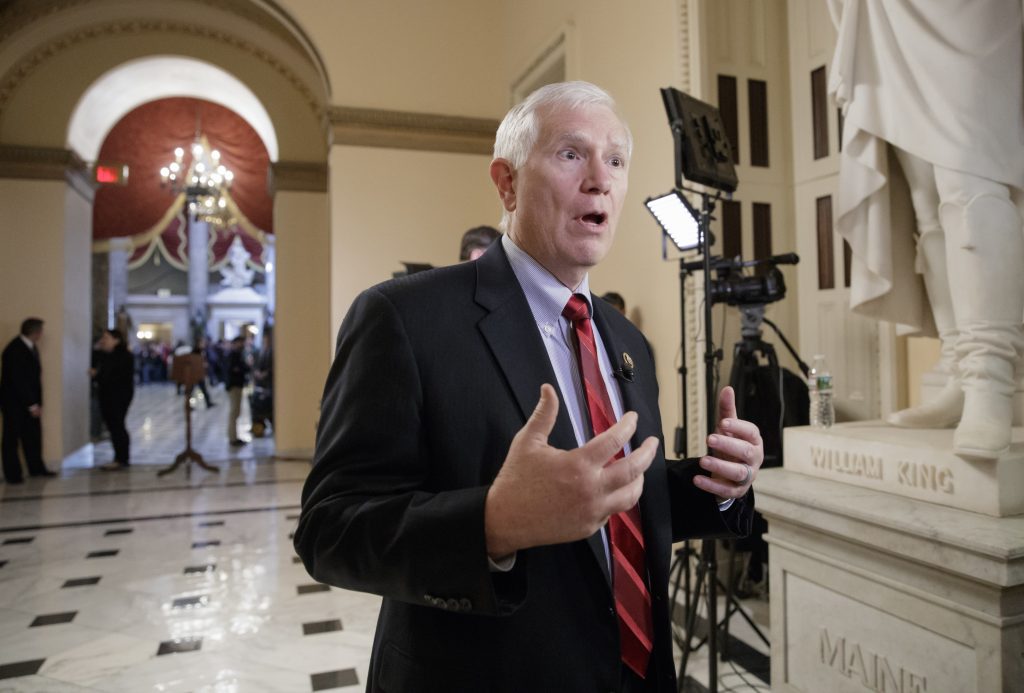 Putting everything on the line, President Donald Trump tried to sway wavering House Republicans on Wednesday some 24 hours before a climactic vote on a GOP health care overhaul. Hard-line conservatives were unpersuaded, insisting the leadership lacked the votes and should start over.

Trump met with 18 Republicans, including members of the House leadership, asking for support in what would be a significant achievement for his young presidency or a stinging defeat if they failed. House leaders planned near-continuous meetings with dissident lawmakers in their push to repeal and replace Barack Obama’s Affordable Care Act.

Asked by reporters if he’d keep pushing a health overhaul if the House rejects the measure, Trump said, “We’ll see what happens.”

Members of the House Freedom Caucus continued to resist all pleas to back the bill. A spokeswoman for the group tweeted that there were more than 25 “no” votes and Republican leaders should “start over.” That’s more votes than the leadership can afford to lose.

A leading foe, Rep. Mark Meadows, R-N.C., told reporters that there are “not enough votes to pass it tomorrow.”

Asked whether Freedom Caucus opposition was sufficient to block the bill, White House spokesman Sean Spicer dismissed it, saying “that sounds like one member’s opinion.”

Weber said it didn’t seem like anyone was softening in their opposition.

Outnumbered Democrats condemned the measure as a transfer of money to the rich, and former Vice President Joe Biden predicted the legislation would fail at a Capitol Hill rally. United Democratic opposition means the measure crashes if 22 GOP lawmakers vote “no.”

The Republican legislation would halt Obama’s tax penalties against people who don’t buy coverage and shrink the federal-state Medicaid program for low earners, which the statute has expanded. It would provide tax credits for medical bills, though generally skimpier than the aid Obama’s statute provides. It also would allow insurers to charge older Americans more and repeal tax increases that Obamacare had imposed on high-income people and health industry companies.

At the rally, Democratic leaders denounced the Republican drive to demolish Obamacare, a GOP pledge since the statute’s 2010 enactment. They criticized its elimination of tax increases Obama imposed on high earners and health-care companies, while reducing federal help for many low-income people and cutting Medicaid, which helps the poor pay medical bills.

“It ain’t going anywhere,” said former Vice President Joe Biden. “This is not going to pass.”

“The people back home are not sold on what we’re doing yet,” he said.

As the Rules Committee met to set the contours of Thursday’s planned floor debate, Republicans said their legislation would help achieve their long-time goal.

“We have the best opportunity in seven years to repeal this sinking ship of Obamacare,” said House Ways and Means Chairman Kevin Brady, R-Texas. He said the GOP bill would “deliver a health care system that truly works for the American people.”

Democrats focused on recent projections by the nonpartisan Congressional Budget Office that the GOP would cost 24 million people coverage in a decade and drive up out of pocket costs for many, particularly lower earners and older people.

The Rules committee, usually tightly controlled by GOP leadership, was expected to let the chamber vote on revisions that top Republicans concocted to win votes. These include adding federal aid for older people and protecting upstate New York counties – but not Democratic-run New York City – from repaying the state billions of dollars for Medicaid costs.

Many conservatives are demanding that the bill void Obama’s restrictions on insurers, which they say drive up premiums. Moderates’ concerns include a worry that the measure would snatch insurance from many voters – a week after the nonpartisan Congressional Budget Office said the measure would toss 24 million off coverage in a decade.

The budget office had projected the original bill would cut federal deficits by $337 billion over a decade. But those savings are plummeting as top Republicans dole out provisions to nail down backing. Language helping older and disabled people includes $85 billion set aside for the Senate to beef up tax credits for people aged 50 to 64, who budget analysts said would see big cost increases from the GOP bill.

Republicans face an even tougher fight in the Senate, which they control by just 52-48. Six GOP senators have already said they oppose the legislation, enough to sink it without changes.