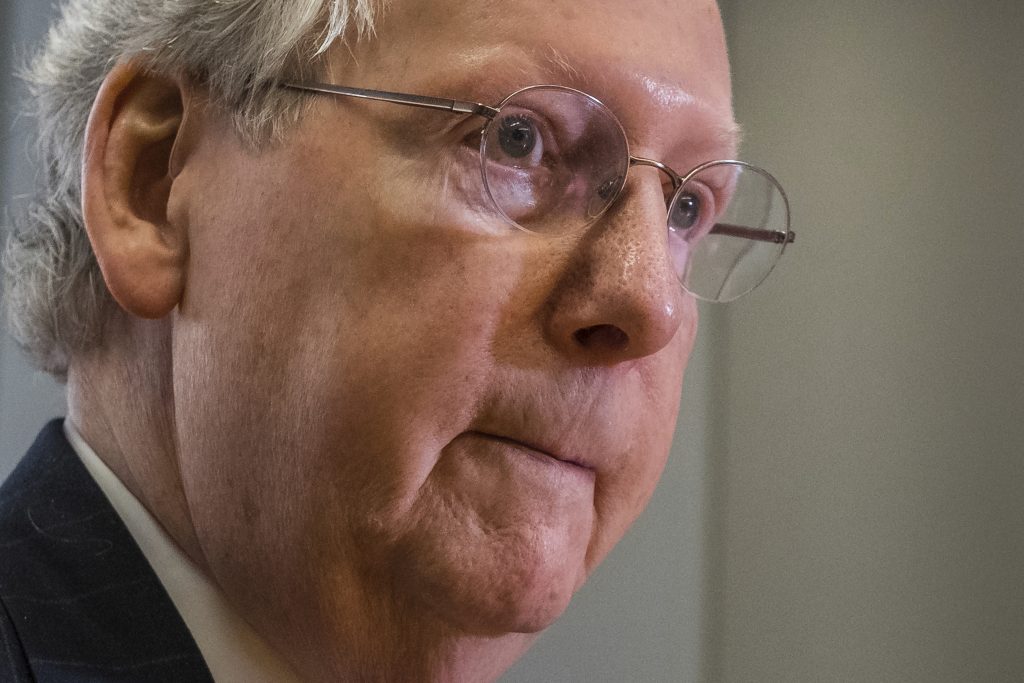 Senate Majority Leader Mitch McConnell warned fellow Republicans Tuesday of political consequences if they oppose health care legislation coming up for a vote in the House this week.

“I would hate to be a Republican whose vote prevented us from keeping the commitment we’ve made to the American people for almost 10 years now” to repeal and replace former President Barack Obama’s health care law, the Kentucky Republican told Associated Press reporters and editors in an interview.

“I think the American people would be deeply disappointed that we were prevented from keeping our commitment by Republicans who in the end, in effect, voted for the status quo.”

“Every president sends up a budget, and with all due respect to the current president, I can’t recall any time in which we have been sort of dictated to by either a Republican or a Democratic president,” McConnell said. “We’ll put our own imprint on it, particularly with regard to overseas.”

On the health care legislation, McConnell sounded confident that the bill will pass the House and come over to the Senate, where it is currently short of votes. He made clear the legislation will change in the Senate so it can pass, though he declined to predict what the final product will look like or guarantee ultimate success.

But he made clear he expects Mr. Trump, who was on Capitol Hill Tuesday to lobby reluctant House members, to lean on wavering Senate Republicans and bring them in line.

“The president has been very effective in helping in the House with the health care bill,” said McConnell, who was with Mr. Trump in Kentucky Monday night at a health care rally. “And we intend, once it comes over from the House, to have the president weigh in with our folks as well.”

The GOP legislation repeals the Obama law’s requirement for nearly everyone to carry insurance or face fines, while phasing out an expansion of Medicaid and reducing tax credits to help consumers by coverage. House GOP leaders are pushing toward a vote Thursday despite opposition from left and right, and announced a package of changes overnight Monday aimed at luring wavering lawmakers with promises of more money for older Americans and other changes.

Several Republican senators have been loudly critical of the bill, including Sens. Rand Paul of Kentucky and Mike Lee of Utah. Combined with opposition from a couple of other lawmakers, McConnell does not presently have enough votes for the bill in a Senate split 52-48 between Republicans and Democrats. Democrats are unanimously opposed.

But McConnell attributed some of the turmoil to a “learning process”, as Republicans turn to governing after spending years as the opposition party. And he said, “I’m optimistic that none of my members in the end want to be responsible for the status quo on Obamacare.”

“America being a force is a lot more than building up the Defense Department,” McConnell said. “Diplomacy is important, extremely important, and I don’t think these reductions at the State Department are appropriate because many times diplomacy is a lot more effective – and certainly cheaper – than military engagement.”

He criticized Democrats for opposing Mr. Gorsuch, saying “This is a futile gesture, it’s playing to the mob, saying resist to everything.”

And while saying he hoped Gorsuch would get Democratic votes in the end, McConnell seemed ready to unilaterally change Senate rules, if necessary, to confirm him with a simple majority rather than the 60 votes now required to move forward. “Gorsuch will be confirmed. I just can’t tell you exactly how that will happen, yet,” McConnell said.