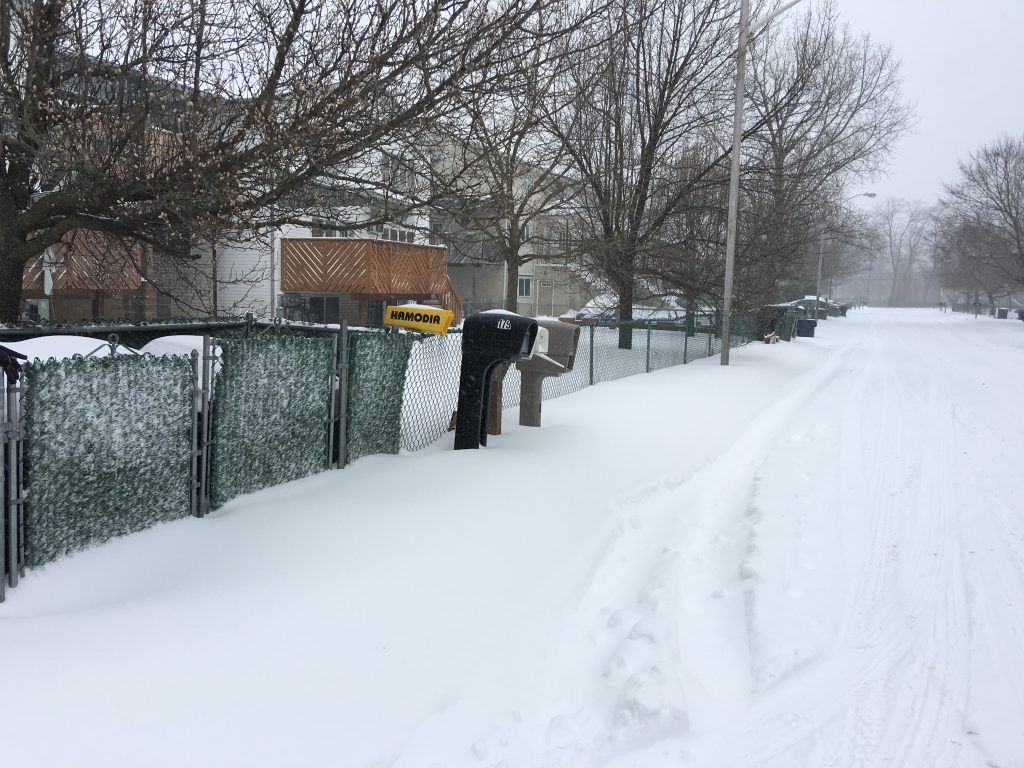 It was the Great Nor’easter of 2017 that couldn’t. But hundreds of thousands of children enjoyed an extended Purim vacation and supermarkets experienced an unexpectedly busy day on what is normally the quietest business day of the year.

Winter Storm Stella, forecast to drop up to two feet of snow in an election-year challenge to Mayor Bill de Blasio, instead begrudgingly dribbled several inches of sleet and sloppy snow on New York City. Areas more upstate, such as Monsey, got more solid snowfalls but were used to it and weren’t as fazed as their downstate neighbors. National Guard vehicles were seen patrolling in Monsey.

The fearsome “Blizzard Warning” was canceled in the city early Tuesday morning, but too late for schools and yeshivos — who had already scratched class for the day — to open. Nearly every yeshivah granted its talmidim a snow day, stretching a four-day Purim weekend into five.

Rabbi Dovid Eizek Rosenberg, the first-grade Rebbi at Yeshivah Ohr Shraga Veretzky in Midwood, said that while the children did not have yeshivah, they joined together for a fun morning.

“We all joined together in a Torah conference call where we davened and learned together and heard an exciting story,” Rabbi Rosenberg told Hamodia.

The Munkatcher cheder of Boro Park sent out a text to parents: “Kinder! Even though you’re at home, you can still be in cheder! Rabbi Schwartz is waiting for you!” It instructed them to call a number for a conference class.

The storm began shortly after 1 a.m., with the predicted light snow falling gently in New York City and New Jersey. But the heavy blizzard forecast for the morning petered out pretty quickly. Residents leaving the house in the early morning for minyan or work were bundled up against a heavy snowfall which didn’t last more than a few minutes.

“Boro Park is totally drivable,” said Shaya Barber, a diamond dealer who lives in Brooklyn and travels frequently to Manhattan. “Parking is difficult, but roads are OK.”

Yisroel Werdyger, a popular singer (and Hamodia editor), had several jobs singing at chasunos in New Square this week. Fearing he would get stuck in the blizzard, one of the mechutanim provided him with an apartment to stay in.

“It was amazing to see the ‘Skvere shtetl’ people from all sides of town shlepping to the main shul for Shacharis,” he said. “There’s about a foot and a half of snow, I would say. The streets are still not plowed well.”

Werdyger said that the storm didn’t keep people away from the chasunah.

“It was packed,” he said. “But there was definitely tension in the air, especially since it already started snowing [during] the wedding.”

The dire warning ahead of the storm led to an unprecedented run on grocery items, giving heimishe supermarkets and food centers a stimulus on a normally sluggish day.

“Shushan Purim is one of the quietest days of the year, probably the quietest,” Mr. Leizer Dovid Itzkowitz, manager at KRM Supermarket in Boro Park, said. On Monday, though, “it looked like Erev Pesach.”

“It was four times as busy — four times as busy! — as on your average Shushan Purim,” Itzkowitz said, repeating it for emphasis. “There was a big run in the afternoon on staples” such as bread, milk, water and candles.

Mr. Avigdor Ehrenfeld, owner of the Parkville Food Center in Kensington, was preparing for what is usually a quiet day in the grocery, when people transition from a Purim to a Pesach mode. As the afternoon rolled in, hype from the storm predictions grew, resulting in a cascade of customers.

“Yesterday was the first time that my bread shelf was empty. There wasn’t a bottle of milk to be found in the store, there weren’t any rolls, no bread — nothing,” Ehrenfeld said. “It was empty, empty, empty. Things such as multigrain bread, 12-grain bread (which usually take a week to be sold) were all sold out yesterday.”

(In jest, Councilman David Greenfield tweeted a picture of a long line outside a supermarket: “Line now in Brooklyn of people waiting to return their bread, eggs and milk to Trader Joe’s [yes, I’m joking].”)

While immediately after Purim may be a slow day for grocers, it is one of the busiest seasons for flying. Bachurim coming home from Eretz Yisrael after the winter zman begin leaving right after Purim, as do couples coming to visit their parents stateside.

Miriam Saalkind of Do All Travel in Brooklyn said the travel agency’s investment in custom-made software made it possible for them to rapidly track everyone affected by the storm and help them rebook.

As many as 8,000 flights were canceled in airports from New England through the Mid-Atlantic states and further inland. Do All, Saalkind said, managed hundreds of successful rebookings.

“Some flights got delayed by up to 14 hours,” Saalkind said. “Everyone was contacted.”

Although the storm was much smaller than anticipated, Baltimore got its first significant snowfall this winter, according to Devorah Klein, Hamodia’s Baltimore correspondent.

“Approximately four to five inches fell by early morning, and light snow continued throughout the day,” said Mrs. Klein, who included pictures of her son playing in a nice-sized igloo that he and a friend made. “However, many people did manage to get out and about, and some schools held learning programs in local shuls for those who could make it out.”