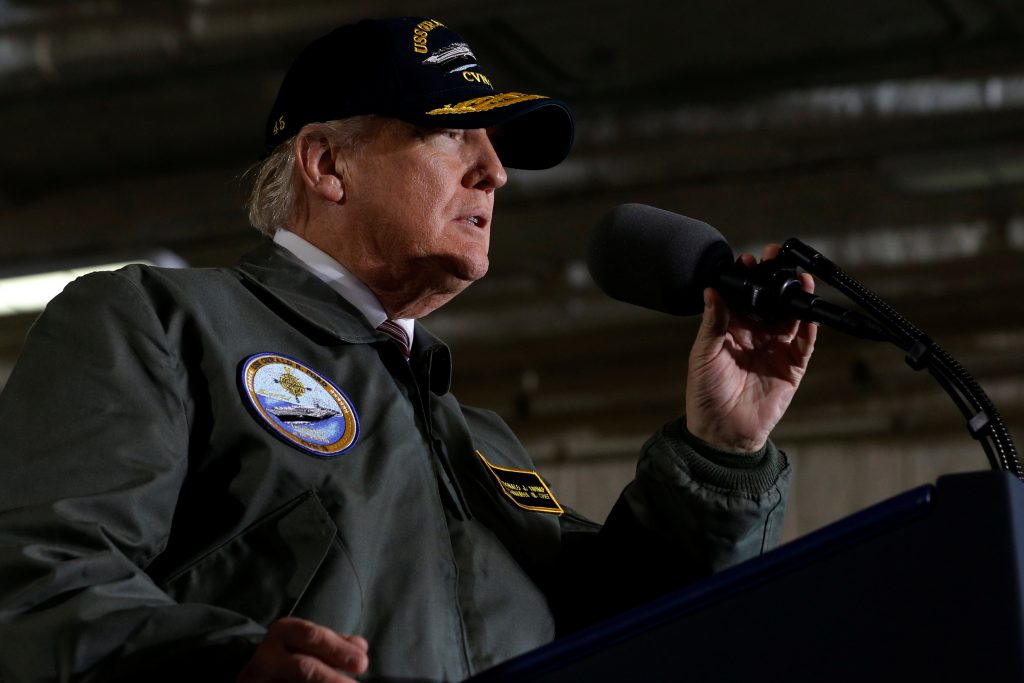 President Trump choppered onto a hulking, gleaming aircraft carrier here Thursday to rally momentum for his ambitious call for a major hike in military spending.

Speaking aboard the U.S.S. Gerald R. Ford – the Navy’s newest nuclear-powered warship, which Mr. Trump celebrated as “a monument of American might” – the president vowed to reinvest billions of dollars in new vessels, fighter jets and other weapons of war to modernize what he has long decried as a depleted defense fleet.

“We will give our military the tools you need to prevent war and, if required, to fight war and to do only one thing,” Mr. Trump said to a few thousand sailors, shipbuilders and other officials. “You know what that is. Win. Win! We’re going to start winning again.”

The $13 billion nuclear-powered warship is the most technologically sophisticated in the U.S. fleet. The President visited Newport News, where the ship was built and is being berthed until it is commissioned later this year, as part of a road show to promote the agenda he outlined in his Tuesday night address to a joint session of Congress. He also plans to visit a Catholic school in Orlando on Friday to highlight his commitment to school choice.

Mr. Trump touted his defense budget priorities, which his aides said earlier this week include adding $54 billion to the Pentagon’s projected budget – a roughly 10 percent increase.

“American ships will sail the seas, American planes will soar the skies, American workers will build our fleets,” Mr. Trump said. “And America’s military will ensure that even through the darkest nights throughout a bright and glowing sun will always shine on our nation and our people.”

Mr. Trump’s visit to the ship was awash in his signature showmanship. He arrived on the carrier’s deck on a windy but blue-skied day in Marine One, sporting a red “USA” cap to keep his hair from blowing in the wind.

After touring the facility and meeting privately with Navy officers, sailors and shipbuilders, Mr. Trump moved from the flight deck to a lower level, which ordinarily serves as a hangar to store planes. The president, alongside Defense Secretary Jim Mattis, descended in an external elevator built to move planes up and down, and emerged to the roar of the crowd wearing a Navy cap and a special green jacket he was given as mementos.

Mr. Trump marveled at the scale and sophistication of the vessel, which he said houses 4,500 personnel and 70 aircraft.

“What a place,” he said. “It really feels like a place. You stand on that deck and you feel like you’re standing on a very big piece of land. But this is better than land.”

The ship was named after the late 38th president, who served in the Navy during World War II aboard a combat ship in the Pacific. Ford’s daughter, Susan, is the ship’s sponsor and introduced Mr. Trump at Thursday’s event.

“Very soon, 100,000 tons of the most powerful warship ever known will report for duty to her commander in chief,” Ford said.

Throughout last year’s campaign, Mr. Trump vowed repeatedly to invest more public money in the military, and he specifically bemoaned the size and age of the Naval fleet as insufficient to win wars.

The Gerald R. Ford, built by Newport News-based Huntington Ingalls Industries, promises to be one of the Navy’s most sophisticated warships. But it has been one of the government’s most troubled acquisitions, running billions of dollars over budget and taking several years longer to build than anticipated.

At a 2015 hearing, Sen. John McCain (R-Ariz.), chairman of the Senate Armed Services Committee, called it “one of the most spectacular acquisition debacles in recent memory.” He added, “We simply cannot afford to pay $12.9 billion for a single ship.”

Mr. Trump made no mention of the overruns, but he promised generally to use the negotiating skills he honed as a New York real estate baron to work out “the best deals for the taxpayer” on new military acquisitions.