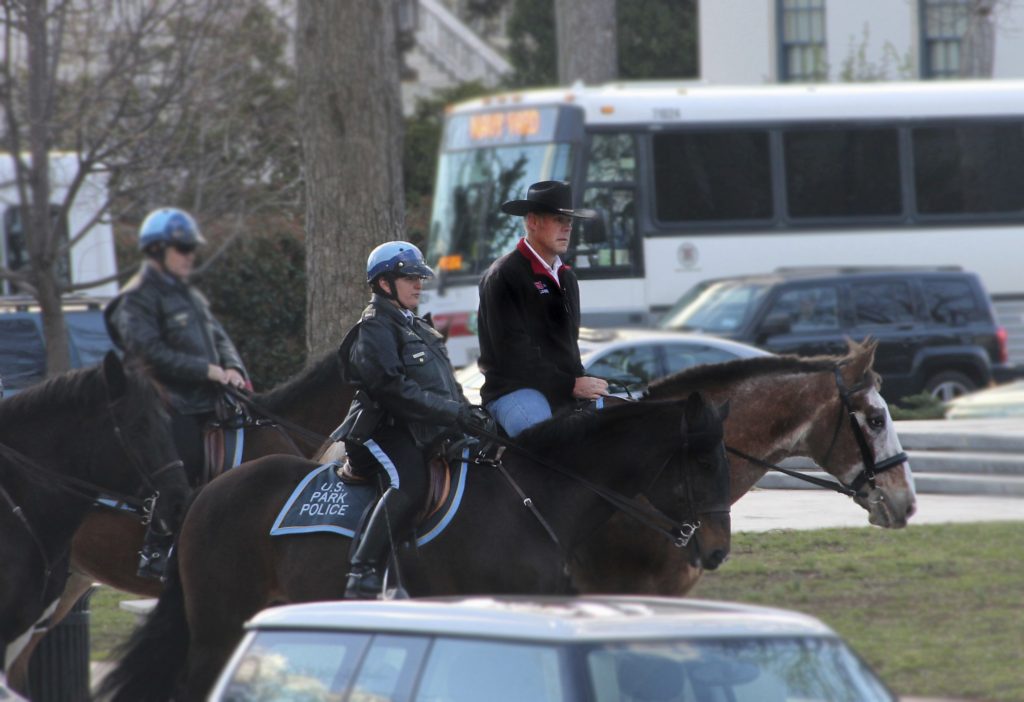 Arriving on horseback Thursday, newly-minted Interior Secretary Ryan Zinke pledged that he would devote more resources to national parks, boost the morale of department employees and bolster the sovereignty of American Indian tribes.

Zinke — who was confirmed by the Senate on Wednesday by a 68 to 31 vote — rode with a mounted police escort to the Interior Department’s downtown headquarters on Tonto, an Irish sport horse. The horse, a bay roan gelding standing just over 17 hands tall, is normally kept in stables on the Mall and is owned by the U.S. Park Police.

While the Park Police serve as the interior secretary’s regular security detail, officers are typically not mounted.

A fifth-generation Montanan, Zinke also sent an email to the department’s 70,000 employees, telling them that he had spent years working on public lands issues and was dedicated to protecting America’s natural heritage.

“I approach this job in the same way that Boy Scouts taught me so long ago: Leave the campsite in better condition than I found it,” he wrote in a missive that was later posted on Medium. “I’m an unapologetic admirer and disciple of Teddy Roosevelt. I believe in traditional mixed use ‘conservation ethics’ doctrine laid out by [Gifford] Pinchot, but realize that there are special places where man is more an observer than a participant, as outlined by [John] Muir.”

An employee with the Office of Indian Affairs from Montana’s Northern Cheyenne tribe played a veterans’ honor song on a hand drum as Zinke approached the department in Washington, while 350 employees waited outside to greet him. In his e-mail, Zinke noted that he was “proud to be an adopted member of the Assiniboine-Sioux from Northeast Montana,” and that his commitment to respecting tribal sovereignty and the rights of U.S. territories “is not lip service.”

Zinke is an avid outdoorsman, and the department’s home page boasts a large photo of him fly-fishing. His Medium post included a photo of him standing outside Glacier National Park with his wife, Lola.

Although Zinke received much more bipartisan support than most of President Donald Trump’s other Cabinet nominees, he also faces challenges mediating between some of Interior’s traditional supporters and conservative Republicans eager to make changes to how public lands are managed. Utah Republicans, for example, have asked Mr. Trump to unilaterally revoke national monument status for Bears Ears, a tribal site in southeastern Utah that President Barack Obama designated less than a month before leaving office.

Zinke has said that reducing the $12.5 billion backlog in maintenance and operations for national parks is one of his and the president’s top priorities. But it’s unclear how much money the administration can devote to the task and other Interior Department programs, given President Trump’s push to boost military funding while cutting other discretionary spending. Interior may face a budget trim of 10 percent to 12 percent, according to individuals briefed on the White House plans. These individuals asked for anonymity because no final funding decision had been made.

In a sign of how contentious lands issues have become, an Instagram post this week by the Interior Department — accompanied by a quote from Zinke — attracted criticism as well as tens of thousands of likes.

“I hope those jobs are filled by people focused on protection and preservation and NOT mining, logging and drilling!” one person wrote. “An attack on the sanctity of our national parks and monuments will face strong resistance!”

Zinke made it clear in his note that he was adamantly opposed to selling off federal lands, as some congressional Republicans had proposed, but he wanted to give Interior employees more flexibility in how they operate.

“We serve the people, not the other way around,” he wrote. “Washington has too much power. I think we need to return it to the front lines.”