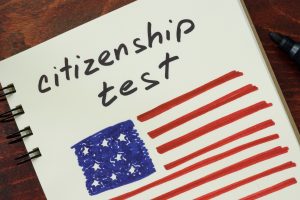 Immigrants who want to become citizens must go through a long list of requirements, including passing a 10-question civics test.

Here are some sample questions:

1 – What do we call the first 10 amendments to the Constitution? Answer: Bill of Rights.

2 – How many amendments does the Constitution have? Answer: 27.

3 – What is the name of the current president of the United States? Answer: Donald Trump.

4 – If both the president and vice president can no longer serve, who becomes president? Answer: Speaker of the House.

5 – How many justices serve on the Supreme Court? Answer: nine.

6 –  What is one power of the federal government under the Constitution? Answers: Print money; declare war; create an army; make treaties.

8 – Who was the first president? Answer: George Washington.

9 – Name one of the two longest rivers in the U.S.? Answer: Mississippi or Missouri.

10 – Who did the United States fight in World War II? Answer: Germany, Japan and Italy.