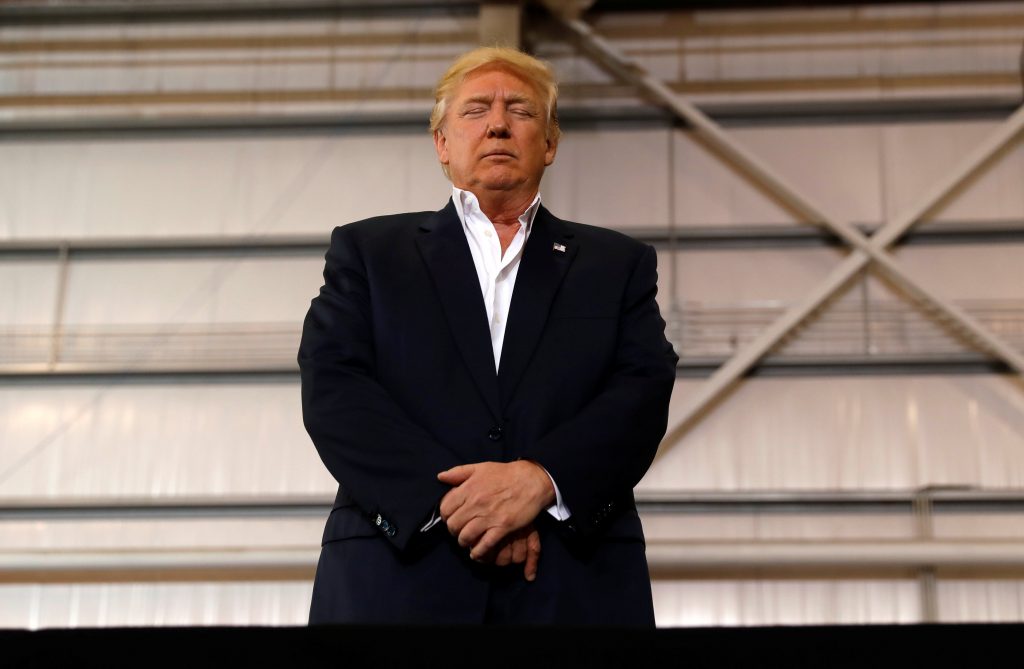 Just four weeks into his administration, President Donald Trump appeared at a campaign rally that mirrored the months leading up to Election Day, complete with promises to repeal Obamacare and insults for the news media.

“I want to be among my friends and among the people,” Trump told a cheering crowd packed into an airport hangar in central Florida, praising his “truly great movement.”

Trump promised anew to build a border wall along the U.S.-Mexico border, reduce regulations and create jobs. He also pledged to “do something over the next couple of days” to address the immigration order that has been blocked in the courts. Said Trump: “We don’t give up, we never give up.”

Insisting he was the victim of false reporting, Trump said his White House was running “so smoothly” and that he “inherited one big mess.” The president has been trying refocus after reports of disarray and dysfunction within his administration.

Speaking to reporters on Air Force One before the rally, Trump said he was holding a campaign rally because “life is a campaign.”

“To make America great again is absolutely a campaign,” he said. “It’s not easy, especially when we’re also fighting the press.”

Trump, who held a rally in the same spot in Florida in September, clearly relished being back in front of his supporters, welcoming the cheers and letting one supporter up on stage to offer praise for the president. He also enjoyed reliving his surprise victory over Democrat Hillary Clinton.

First Lady Melania Trump introduced her husband at the rally, offering her own pledge to act in the best interest of all Americans as she pursues initiatives she says will impact women and children around the world.

The event had the familiar trappings of a Trump campaign rally, including red Trump caps, “Make America Great Again” and “Trump/Pence” signs and at least one sign reading “Hillary for Prison.” Some of the speakers ahead of Trump’s appearance called for repealing and replacing President Barack Obama’s health-care law, criticized the news media or lobbed barbs at Clinton, other constants of last year’s rallies.

The rally came during Trump’s third straight weekend at his private south Florida club, Mar-a-Lago. It was another working weekend for the president, who planned to interview at least four potential candidates for the job of national security adviser, a position unexpectedly open after retired Gen. Michael Flynn’s firing early this week.

On Saturday, Trump said: “I have many, many that want the job, they want to really be a part of it. I’ll make a decision over the next couple of days.”

Finding a new national security adviser was proving to be a challenge for Trump. His first choice, retired Vice Adm. Robert Harward, turned down the offer.

Trump had also expressed interest in former CIA Director David Petraeus, but Spicer said Saturday that Petraeus was not a finalist. The retired four-star general resigned as CIA director in 2012 and pleaded guilty to one misdemeanor charge of mishandling classified information relating to documents he had provided to his biographer.

Flynn resigned at Trump’s request Monday after revelations that he misled Vice President Mike Pence about discussing sanctions with Russia’s ambassador to the U.S. during the transition. Trump said in a news conference Thursday that he was disappointed by how Flynn had treated Pence, but did not believe Flynn had done anything wrong by having the conversations.