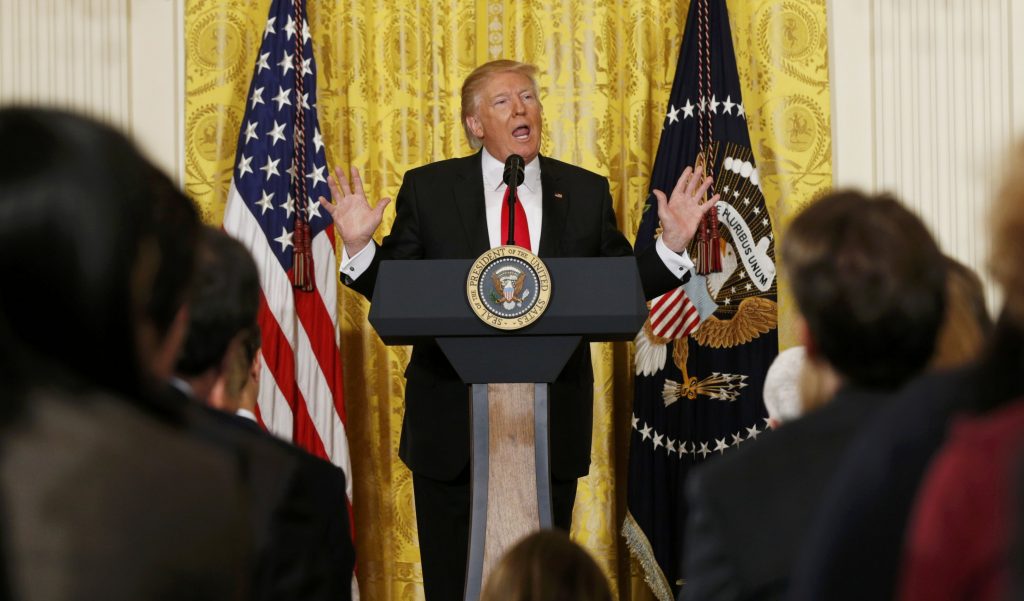 President Donald Trump on Thursday aired his grievances against the news media, the intelligence community and his detractors generally in a sprawling, stream-of-consciousness news conference that alternated between claims that he had “inherited a mess” and the assertion that his fledgling administration “is running like a fine-tuned machine.”

“To be honest, I inherited a mess,” Trump said, in news conference that lasted more than an hour and was at times rambling, combative and pointed. “It’s a mess. At home and abroad, a mess. Jobs are pouring out of the country.”

Yet moments later, the president seemed to acknowledge the widespread reports of turbulence and upheaval emanating out of his West Wing, only to claim that his White House — which so far has been marred by staff infighting, a controversial travel ban, and myriad leaks — was operating seamlessly.

“I turn on the [media], open the newspapers and I see stories of chaos — chaos,” he said. “Yet it is the exact opposite. This administration is running like a fine-tuned machine, despite the fact that I can’t get my Cabinet approved.”

Asked about recent reports that Mike Flynn, his former national security adviser who resigned Monday evening, had improperly discussed Russian sanctions with the Russian ambassador to the United States before President Trump was sworn in, the president defended Flynn as a “fine person,” saying he had done nothing wrong in engaging the Russian envoy.

But, Mr. Trump said, Flynn had erred by misleading government officials — including Vice President Mike Pence — about his conversations, which is why the president ultimately demanded his resignation.

“He didn’t tell the vice president of the United States the facts,” Mr. Trump said. “And then he didn’t remember. And that just wasn’t acceptable to me.”

President Trump also pushed back on reports that members of his campaign and other associates had repeatedly been in contact with senior Russian intelligence officials during the campaign, saying “nobody that I know of,” and adding, “I have nothing to do with Russia.”