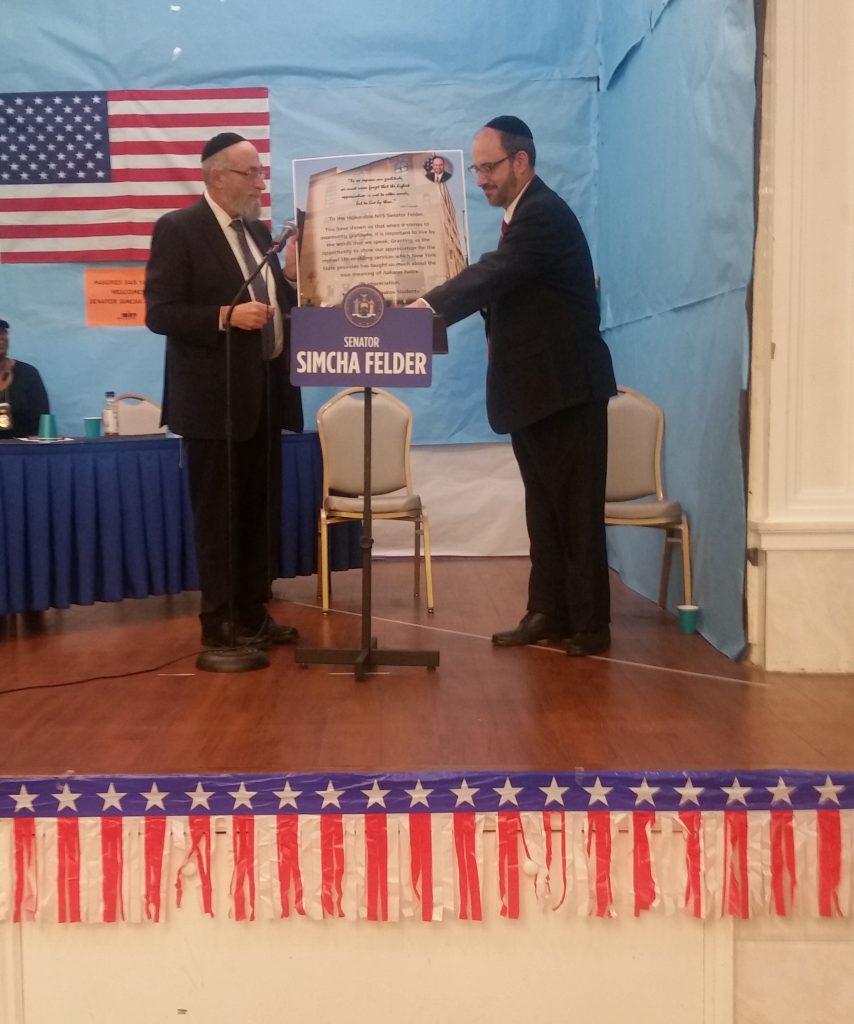 Aided by an auditorium full of attentive youngsters, state Sen. Simcha Felder on Wednesday held a #WHODYA event — or Who Do You Appreciate — thanking emergency workers and the nation’s armed forces for their services to the community.

The young girls of Masores Bais Yaakov were excited to see an array of uniformed officials in their school in Midwood, from the war veteran with a garrison cap perched on his head to the sanitation, police, fire and postal workers. Hatzolah as well put in an appearance.

Green, blue, red and navy reigned at the event which served both to thank the employees for their service and to instill safety issues in the third and fourth graders.

“Imagine,” Felder asked the approximately 100 children, “having to go out in the boiling hot weather… Imagine not taking out your garbage for three days? How would you feel if you knew that people appreciate what you’re doing but nobody ever said thank you?”

Theresa Cunningham, a sanitation worker, told the audience of the many things the department does, including garbage collection, recycling and clearing the snow.

“We’re very appreciative of you appreciating us,” she told the students.

Jackie-Michelle Martinez, a female firefighter from South Jamaica in Queens, led the children in a fire drill, laying low to be able to breathe in smoky areas and jumping up so that firefighters can see them.

“Mice and rats never die from fires because they’re low on the ground,” she noted.

Lazer Rosman, a member of Hatzolah, was then introduced as the unit who once saved Felder’s father when he thought he was having a heart attack. He discussed preventing accidents and distributed stickers with Hatzolah’s number.

But the politics of the day couldn’t help but intrude, a day after Felder engineered the postponement of the city’s impending bag fee.

“As a matter of fact,” Rosman said, gesturing to the senator, “I know he likes plastic bags so I brought him a bag of stickers.”

David Goldberg, a Vietnam war veteran and commander of the Jewish War Veterans, talked about his time serving the country and his subsequent 28-year career as a police officer.

“I don’t wish anyone to have to be in a war,” Goldberg said. “But I’m proud to be in the United States of America and to be a veteran.”

Then came the surprise.

A group of girls dressed as sanitation workers put on a presentation, dressed in garbage bag overalls and holding brooms and trash items. They read a poem of all the things sanitation workers do, ending with handing Cunningham a mini garbage pail with a copy of the poem.

Then came the mailmen, or mailwomen. Girls dressed in the blues of postal workers and holding aloft a giant envelope recited their poetry. The envelope was opened at the end to reveal a bunch of small pockets with thank you notes, which they handed to Martinez.

Next on the podium were New York’s Finest and Bravest, with children holding a huge oak tag police badge and cutouts of police officer figures, followed by the fire crew. Last came the Marines, with a poem recited in honor of Goldberg and Jewish war veterans everywhere.