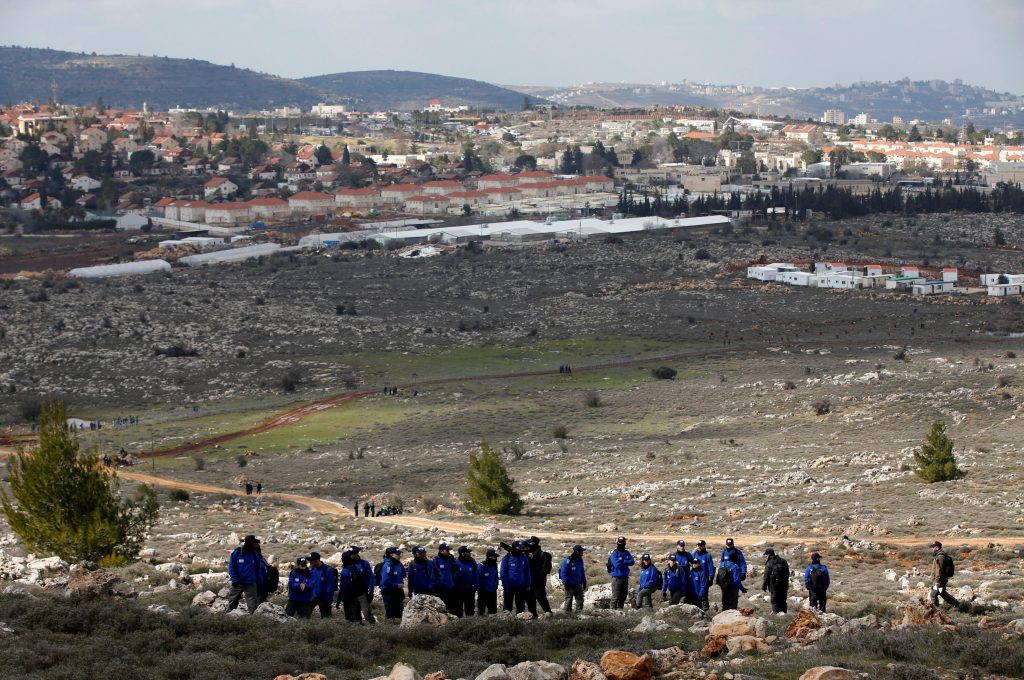 Security forces moved into the outpost of Amona on Wednesday for the final evacuation and demolition of over three dozen homes at the site.

Unarmed police in blue sweatshirts and black caps made their way up the hill around midday.

Minor scuffles broke out between some activists and police as protesters tried to block officers from progressing.

Police spokesman Micky Rosenfeld said forces were operating “carefully and slowly.” He said two officers were lightly hurt and two protesters were removed from the scene but not arrested.

Protesters chanted “Jews don’t expel Jews” as they linked arms to form a wall against police.

After distributing eviction notices on Tuesday, security forces on Wednesday morning warned residents that they had one more chance to leave the site voluntarily before police forced them to leave.

Beginning Tuesday afternoon, police began setting up roadblocks in the area of Road 60 to prevent protesters from gathering to try and prevent the demolitions. Nevertheless, hundreds got through anyway, and many have barricaded themselves inside houses at the site. Amona leaders pleaded with protesters to avoid violence, and at the very most to passively resist the evacuations, without raising a hand to police who would then be forced to drag them away. With that, they said that residents would remain in their houses until they were pulled out by police.

Soldiers and police who are participating in the evacuation have undergone extensive training to ensure that they, too, restrain themselves in the face of provocations. The government has been working very hard to avoid repeats of the events of 2006. Then, police and officials of the Civil Administration evacuated and razed nine buildings in Amona, facing down 4,000 Israeli protestors in a traumatic operation that saw dozens of people, including three MKs, injured. Leading the country at that time was Ehud Olmert, who was acting prime minister after Ariel Sharon had a massive stroke in January. Both Sharon and Olmert, leaders of the Kadima party, had already shown their willingness to forcibly remove Jews from their homes a year earlier during the disengagement from Gaza and northern Shomron – and were bitterly criticized for both moves by Binyamin Netanyahu, the current prime minister.

Where the Amona residents are to go when they are evicted is not clear. The final date for the evacuation and demolition of Amona was set for February 8th, by which time, the residents were promised, caravans would be set up for them on another part of the hilltop. Those caravans are nowhere to be seen, though, as a plan by the government to place the caravans on another side of the hilltop fell through when the High Court ruled Tuesday that the parcels where the caravans were to be built are in dispute, as are the Amona homes themselves. The decision Tuesday extended the injunction against the installation of the caravans ordered last Tuesday.

Meanwhile, Prime Minister Netanyahu and Defense Minister Avigdor Liberman announced late Tuesday that 3,000 new homes would be built in Yehudah and Shomron. Two thousand of them were at the last stages of approval, and could be sold immediately, they said, adding that the new homes, along with another 2,500 approved several days ago, “are part of our efforts to bring life in Yehudah and Shomron back to normal.”