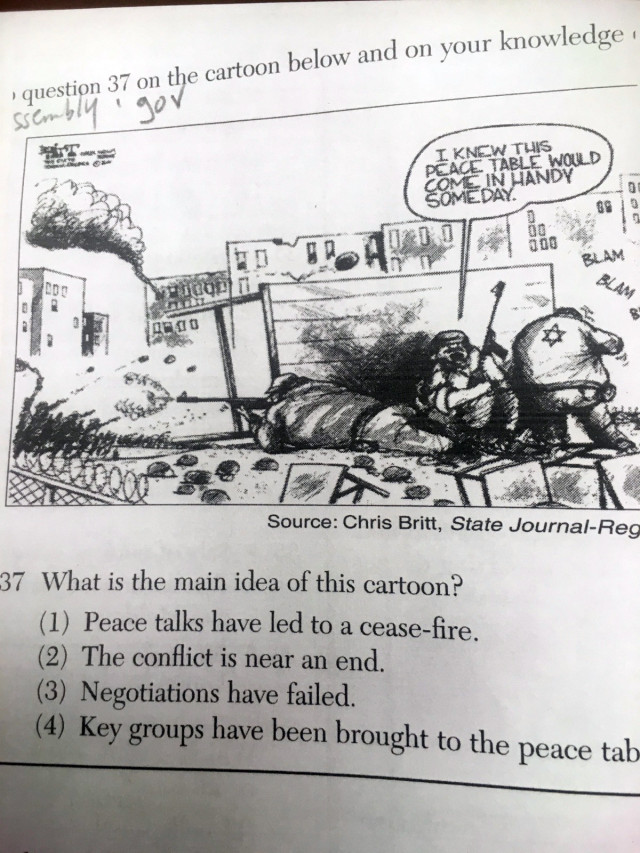 A political cartoon in last week’s Global Studies Regents exam portrays Israel as against peace and trigger-happy, and a Brooklyn lawmaker is slamming the agency who approved its inclusion.

The cartoon illustrated three soldiers, with one of them identified with a Star of David on his back, in the midst of firing guns hiding behind a table. The caption reads: “I knew this peace table would come in handy someday.”

The portrayal was made by Chris Britt and first appeared in the State Journal-Register in Springfield, Illinois. It was included in the state test on Jan. 24, along with questions for 10th graders to answer, such as “What is the main idea of this cartoon?”

Assemblyman Dov Hikind said Wednesday that it wrongly blamed Israel for the failure of the peace process.

“Who is responsible for allowing this incredibly biased, anti-Israel propaganda be part of a Global Studies Regents exam?” Hikind said. “I want to know who at the Board of Regents thought it was appropriate to incorporate such prejudice into their examination.”

Several Jewish high schools told Hamodia that they did not have Regents exams in January.

Jonathan Burman, a spokesman for the state’s Education Department, defended the question to the New York Post, saying it “measures the students’ ability to analyze a political cartoon, understand the cartoonist’s point of view and apply that information to the questions being asked.”

Britt, a nationally syndicated editorial cartoonist whose work is distributed by Creators News Service, said he did not mean to show bias.

“To me it was just showing how frustrating the peace process was,” he told the Post. “It’s not trying to indoctrinate someone. It’s, ‘Can you look at this and tell us what’s going on in the creator’s mind?’”

Hikind is demanding that the Board of Regents apologize.

“Rather than educating our children on issues in the Middle East,” he said, “we’re presenting them with horrible, slanted images that will only jade their point of view moving forward.”