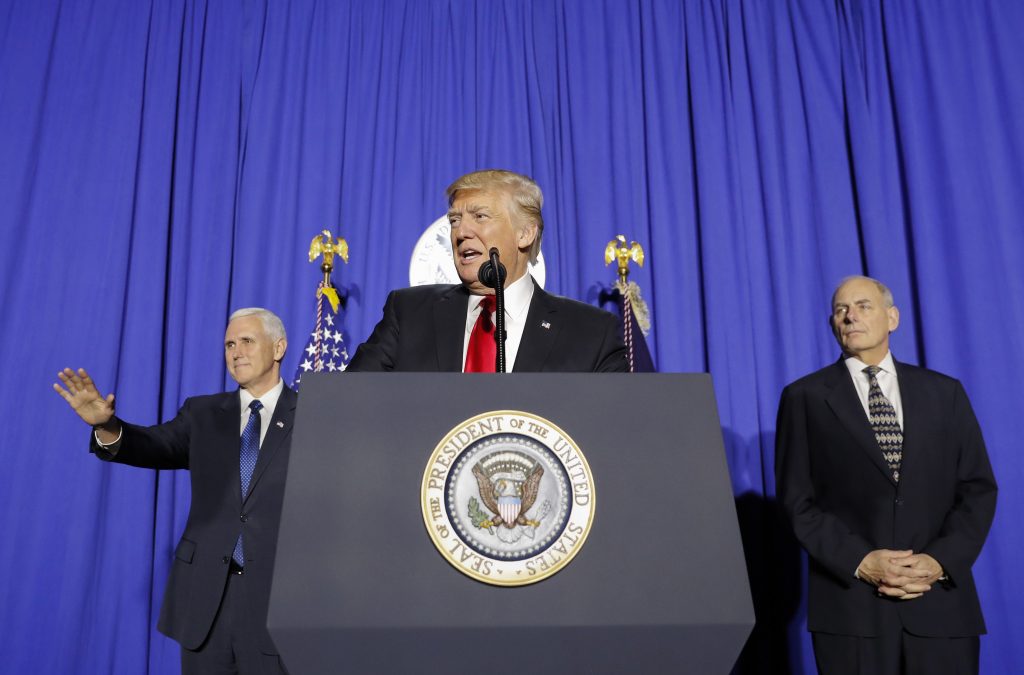 “We do not need new laws,” President Trump said Wednesday during remarks at the Department of Homeland Security. “We will work within the existing system and framework.”

The centerpiece of the measures President Trump signed was an order to jumpstart construction of his promised U.S.-Mexico border wall. He also ordered cuts in federal grants for immigrant-protecting “sanctuary cities” and a boost in the number of border patrol agents and immigration officers, pending congressional funding.

Sometime this week, President Trump is expected to pause the flow of all refugees to the U.S. and indefinitely bar those fleeing war-torn Syria. The president’s upcoming order is also expected to suspend issuing visas for people from several predominantly Muslim countries — Iran, Iraq, Libya, Somalia, Sudan, Syria and Yemen — for at least 30 days, according to a draft executive order obtained by The Associated Press.

The actions, less than a week into Trump’s presidency, would fulfill pledges that animated his candidacy and represent a dramatic redirection of U.S. immigration policy. They were cheered by Republicans allies in Congress, condemned by immigration advocates and triggered new tension with the Mexican government.

Trump was expected to turn back to the economy Thursday, signing a notice to Congress that he plans to start bilateral trade negotiations with most of the countries in the Trans-Pacific Partnership pact, according to a White House official. On Monday, Trump moved to pull the U.S. out of the 12-nation Pacific Rim agreement, which he said would be damaging for American workers. Instead, he said he wanted to negotiate with countries individually.

The official insisted on anonymity in order to confirm the executive action ahead of Trump’s announcement.

For years, lawmakers in both parties have worked to pass immigration legislation that would provide some form of legal status for people living in the U.S. illegally, most recently in 2013. Given the growing political power of Hispanic voters, Republicans had feared the opposition from some in the party would deeply damage their prospects of winning back the White House. But Trump’s ability to win on a hard-line immigration message has recalibrated the party’s view.

Trump is unveiling his immigration plans at a time when detentions at the nation’s southern border are down significantly from levels seen in the late 1990s and early 2000s. The arrest tally last year was the fifth-lowest since 1972. Deportations of people living in the U.S. illegally also increased under President Barack Obama, though Republicans criticized him for setting prosecution guidelines that spared some groups from the threat of deportation, including those brought to the U.S. illegally as children.

As a candidate, Trump tapped into the immigration concerns of some Americans who worry both about a loss of economic opportunities and the threat of criminals and terrorists entering the country. His call for a border wall was among his most popular proposals, and supporters often broke out in chants of “build that wall” during rallies.

While the president has repeatedly promised that Mexico will foot the bill, U.S. taxpayers are expected to cover the initial costs. The new administration has said nothing about how it might compel Mexico to reimburse the money.

In an interview with ABC News on Wednesday, Trump said, “There will be a payment; it will be in a form, perhaps a complicated form.”

Mexican President Enrique Peña Nieto responded, “I have said time and again, Mexico will not pay for any wall.” Peña Nieto was expected to meet with Trump at the White House next week.

Congressional aides say there is about $100 million of unspent appropriations in the Department of Homeland Security account for border security, fencing and infrastructure. That would allow planning to get started, but far more money would have to be appropriated for construction to begin.

House Speaker Paul Ryan, in an interview Wednesday on MSNBC, said Congress will work with Trump on the upfront financing for the wall. Asked about estimates that the project could cost $8 billion to $14 billion, Ryan said: “That’s about right.”

Trump has insisted many times the border structure will be a wall. The order he signed referred to “a contiguous, physical wall or other similarly secure, contiguous and impassable physical barrier.”

To build the wall, the president is relying on a 2006 law that authorized several hundred miles of fencing along the 2,000-mile frontier. That bill led to the construction of about 700 miles of various kinds of fencing designed to block both vehicles and pedestrians.

The president’s orders also end what Republicans have labeled a catch-and-release system at the border. Currently, some immigrants caught crossing the border illegally are released and given notices to report back to immigration officials at a later date.

Trump’s crackdown on sanctuary cities — locales that don’t cooperate with immigration authorities — could cost individual jurisdictions millions of dollars. But the administration may face legal challenges, given that some federal courts have found that cities or counties cannot hold immigrants beyond their jail terms or deny them bond based only on a request from immigration authorities.

The president also moved to restart the “Secure Communities” program, which was launched under President George W. Bush and initially was touted as a way for immigration authorities to quickly and easily identify people in the country illegally who had been arrested by local authorities.