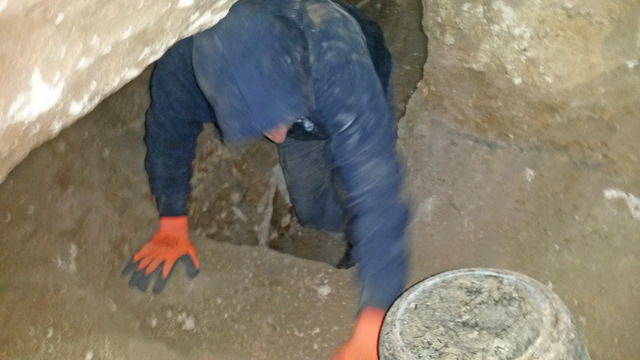 A ring of 13 Arab Israeli antiquities robbers was apprehended at Horbat Mishkena, the archaeological site of a Roman-era Jewish town near the Golani Junction in the Lower Galil

They were apprehended by a squad from the of Robbery Prevention Unit of the Israel Antiquities Authority (IAA), operating with the police and border guard volunteers.

The suspects were caught while digging illegally in the ancient shelter system and causing extensive damage to the site.

“Horbat Mishkena is the remains of a Jewish village in the Roman era,” said Nir Distelfeld of the Robbery Prevention Unit of the IAA. “The town ‘Mishkena’ is mentioned in the Talmud Yerushalmi as a Jewish village located halfway between Teveria and Tzippori.”

The shelter systems are known mainly from the Judean plain and were used during the great revolt of the First Century CE and the Bar Kochba Revolt of the Second Century. While there are fewer such systems in the Galil, they are discovered from time to time.

According to Dirstelfeld: “This was the largest capture of antiquities thieves which has ever occurred in the north. Nine of the suspects were apprehended just as they were exploring the underground shafts of the shelter system. Two others were captured by the entrance to the system trying to escape… .These grave robbers are looking for underground spaces with burial caves, thinking that they will find valuables there preserved underground for hundreds or thousands of years. Because of their greed these robbers are destroying all of our history and are erasing all of the important parts of the archaeological heritage of the land.”

The penalty for unlicensed excavation is up to three years in prison, and damage to antiquities – up to five years in prison. In addition, the bandits will be required to pay compensation of hundreds of thousands of dollars for the damage they caused.