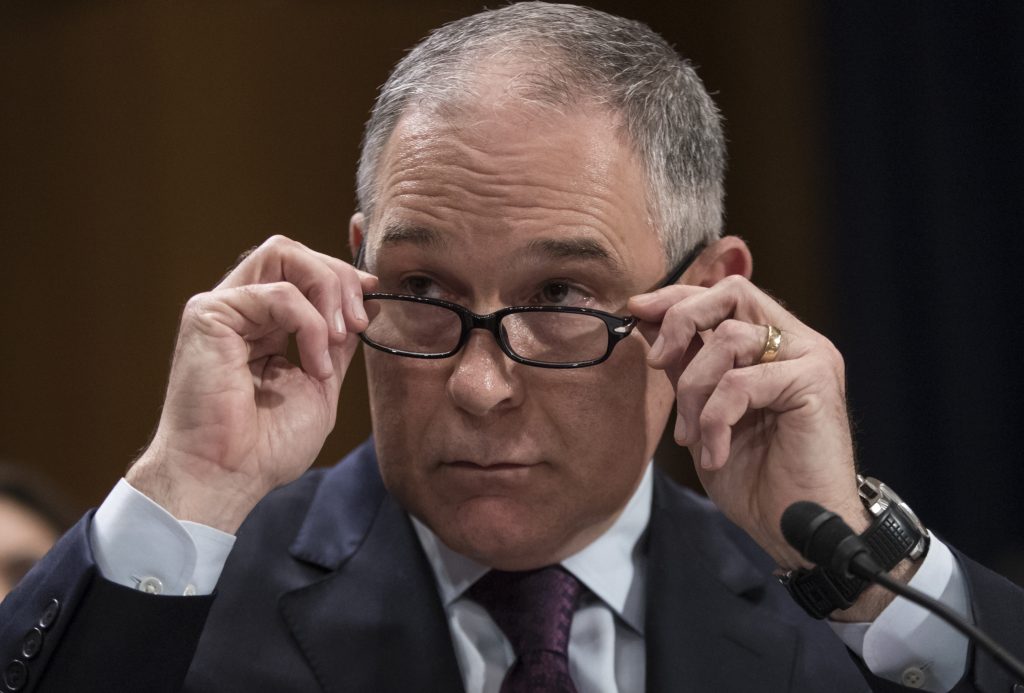 President-elect Donald Trump’s nominee to lead the Environmental Protection Agency outlined a vision for scaling back the office’s reach, while pledging to support clean air and water and hold polluters responsible for violations when necessary.

Oklahoma Attorney General Scott Pruitt told the Senate Environment and Public Works Committee Wednesday that environmental protection can be accomplished in collaboration with states and Congress — without undermining the economy.

For roughly seven years as Oklahoma’s attorney general, Pruitt has been on the other end of the EPA’s authority, chafing at — and challenging — agency regulations governing water, limiting pollution from power plants and slashing greenhouse gas emissions. Pruitt has become one of Trump’s most controversial cabinet picks because he has dedicated much of his career to battling the very agency he has been tapped to lead.

If confirmed, Pruitt will be able to rewrite or rescind scores of environmental regulations officially — or simply ease off on their enforcement. Supporters, including panel chairman John Barrasso of Wyoming, say he would rein in overzealous Obama-era rules and restore much-needed balance to environmental regulation, making good on Trump’s promise to focus the EPA on its core mission of protecting the air and water.

Opponents take a starkly different view. Sen. Brian Schatz, a Democrat from Hawaii, has termed Pruitt’s nomination “a full-fledged environmental emergency.” Critics are using targeted advertising, a barrage of phone calls to Senate offices and even a singing sit-in to try and derail the nomination.

“Pruitt is of special focus because of the complete mismatch between the nominee and the agency he would head,” said David Goldston, government affairs director for the Natural Resources Defense Council.

Delaware Sen. Tom Carper, the top Democrat on the environment committee, outlined a clear test for Pruitt: Does he share a belief that humans have a “moral obligation” to serve as stewards of the planet?

“We need to be convinced that you embrace it as well, not just with your words, but with your deeds,” Carper told Pruitt. “Much of your record suggests otherwise.”

Early on, Pruitt sought to dispel questions about his view of climate change — though his answer may have only provoked more queries about the degree to which he views the phenomenon as a threat.

“Science tells us the climate is changing and human activity in some manner impacts that change,” Pruitt told the panel. “The ability to measure the precision, degree and extent of the impact and what to do about that are subject to continued debate and dialogue.”

Democrats also plan to press Pruitt to explain how he would approach issues on which he has challenged the EPA’s authority in the past. It’s not unprecedented for an EPA administrator to have tangled with the same agency prior to leading it. For instance, Gina McCarthy, the current administrator, previously sued the EPA as a Massachusetts state official. However, Pruitt has been far more active, targeting a broader array of EPA rules.

Tom Randall contributed to this report.