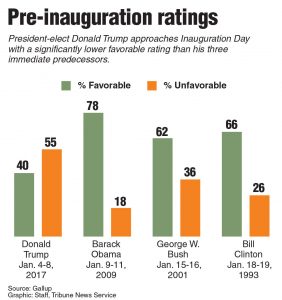 President-elect Donald Trump accused approval rating polls of underestimating his support as he nears inauguration, tweeting early Tuesday morning that they were “rigged” against him.

“The same people who did the phony election polls, and were so wrong, are now doing approval rating polls,” he wrote. “They are rigged just like before.”

A new CNN/ORC poll released earlier Tuesday had showed Trump with an approval rating of 40 percent for how he has handled his transition, lower than those of Presidents Barack Obama, George W. Bush and Bill Clinton before they took office.

Slightly more than half of those polled said they were “less confident” in Trump’s ability to hold office, according to the poll, and respondents were split evenly on whether or not the president-elect would be a good chief executive.

According to a similar Washington Post/ABC News poll, 44 percent of respondents said they thought Trump had the qualifications to be president, and 54 percent said they had an unfavorable impression of Trump.