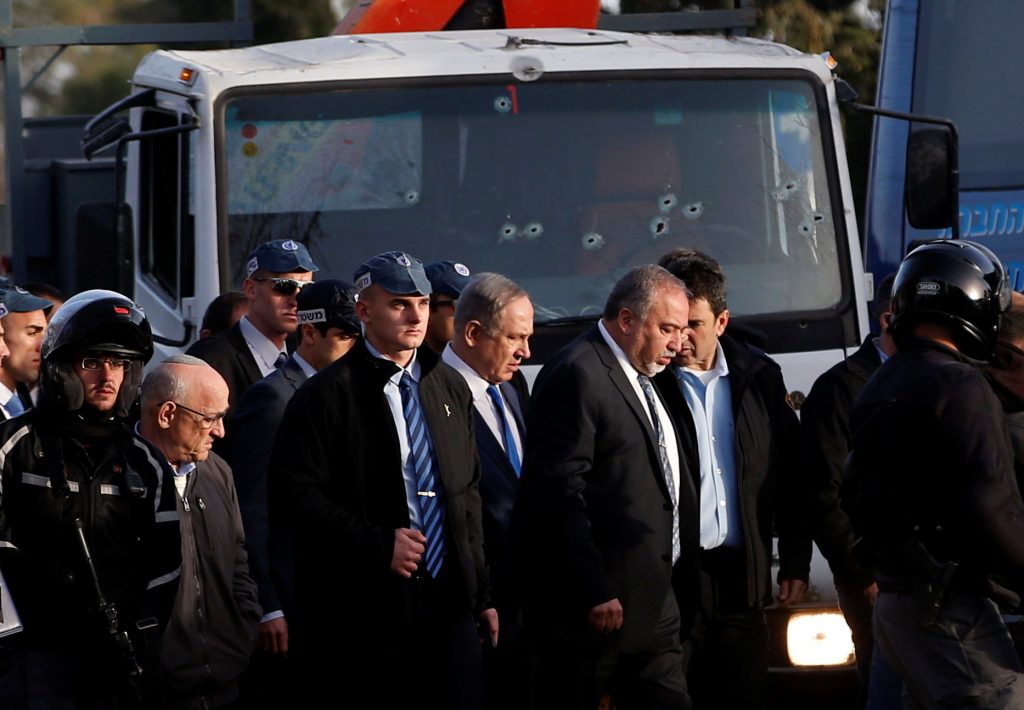 Reactions from government officials, eyewitnesses and family members continued to stream in after the terror attack in Yerushalayim on Sunday that killed four Israeli soldiers and wounded 16.

U.S. Department of State deputy spokesperson Mark C. Toner released a statement saying: “We condemn in the strongest possible terms today’s horrific vehicular attack by a terrorist in Jerusalem.‎ There is absolutely no justification for these brutal and senseless attacks. We‎ condemn the glorification of terrorism now or at any time and call on all to send a clear message that terrorism must never be tolerated.

“Our thoughts and prayers are with the families of the four Israeli soldiers who were killed, and we hope for a full and fast recovery of those injured.”

As he departed for Georgia, Israeli President Reuven Rivlin commented on the attack:

“I am departing now on a state visit to Georgia though my heart remains in Israel, and it is a heavy heart, indeed. I and Nechama send our support to the families who have lost those most dear to them, and offer strength to the injured being treated in hospital. On my return, I will visit the families.”

Israeli Housing Minister Yoav Galant (Kulanu) took a more punitive turn. He told Army Radio that the Cabinet should consider “the demolition of homes, the expulsion of families, the revocation of identity cards of all the partners in this regard. That must be the price [for terrorism]…. Don’t send them to Gaza, but rather to Syria.”

The former IDF general added: “I [say] deal harshly with those who come to kill our children and to kill us. There will not be an incident like this [again]. We will utterly cripple the terrorism.”

Sarah Lahav, the mother of IDF soldier Segev Lahav, who was wounded in the attack, told Arutz Sheva: “My son is in an officer’s training course at Training Base 1. He was supposed to be beginning a week of vacation time from the training. This week is considered the safest part of the course,” she said.

“I am traumatized by what happened today. I couldn’t speak to [Segev]. He saw terrible things. He saw friends killed next to him who yesterday slept in the bed next to him.

“Now his head is being sewn up and I hope he will not have a scar. I wasn’t listening to the news today and then I got a message on my phone: Mum, I was wounded and I’m in Shaare Zedek hospital.”

A tour guide who witnessed the horror, recounted to Ynet: “I saw a truck speeding… people ran for cover, yelling ‘terror attack’… it lasted about a minute and a half until the terrorist was neutralized… I was treating the wounded, trying to strengthen them and praying.”

ZAKA Yerushalayim commander Bentzi Oering: “I arrived with other ZAKA volunteers and the scene looked like a battlefield. Many injured lay on the grass; some of them were still trapped under the terrorist’s truck.”

ZAKA Yerushalayim Operations Commander Meir Akar: “A crane from the firefighters helped us lift the front part of the truck so that we could free those trapped underneath. Tragically, they were no longer alive. A team from the forensics department of the Israel Police and ZAKA carried out the initial identification of the dead. ZAKA then removed the bodies of the four victims and the terrorist. Another ZAKA team remained at the scene to clear the significant amount of blood and remains to bring them to burial.”

Hadassah Medical Center head professor Yoram Weiss summarized the conditions of the survivors: “Five people who were directly injured arrived here, two of whom are treated in the Intensive Care Unit. The rest are lightly-to-moderately injured and are currently being transferred to different units.”

“Regarding the seriously injured: one went through surgery to stop internal bleeding and another is currently being brought to surgery. All in all, we’ve treated 14 people. None of them are in any immediate danger.”