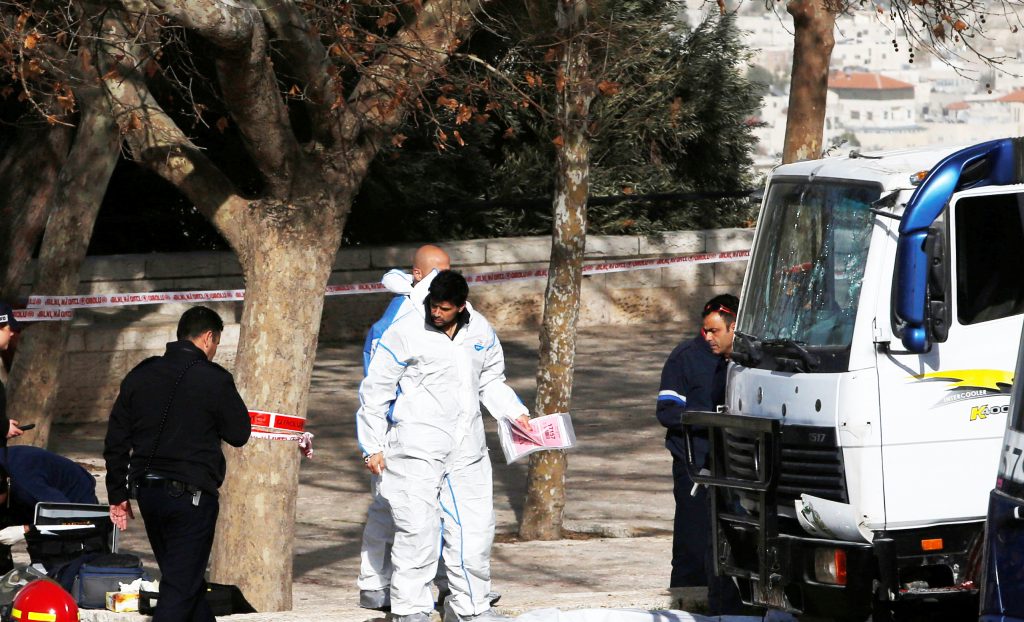 A terrorist driving a truck slammed into a crowd in Armon Hanatziv in Yerushalayim Sunday afternoon, mowing down pedestrians on a popular scenic walk in the city. Officials at the scene said that at least four of the victims were killed in the attack, Hy”d. Another dozen were injured, some of them in critical condition. Several victims were pinned under the truck, and rescue workers were able to remove them by lifting the truck with a crane.

Most of the victims were soldiers, officials said. The soldiers were part of a unit that was on an educational tour of Yerushalayim. Witnesses said that the driver, who was coming from the direction of the Arab Jabel Mukaber neighborhood, drove into a group of soldiers as they were getting off a bus. The driver plowed into the crowd, backed up, and then proceeded again into the soldiers who were now fleeing.

Witnesses told Israel Radio that the truck rammed into the soldiers “at high speed.” A soldier opened fire on the terrorist when he started driving into the crowd a second time. “It’s clear that his intention was to hurt as many people as possible,” the witnesses said.

The terrorist was shot and killed by soldiers at the scene. The soldiers prevented a much larger tragedy with their quick thinking, the witnesses said. The terrorist has been identified by authorities, and large security forces were said to be gathered outside his house, which is only a short distance from the site of the attack.

The truck hit hit the group on the Armon Hanatziv tayelet, the scenic walk that offers a view of the Old City.

The attack occurred about 1:15 on Sunday afternoon. A report of a second vehicle ramming attack in the Har Homa neighborhood of the city. That report turned out to be false.