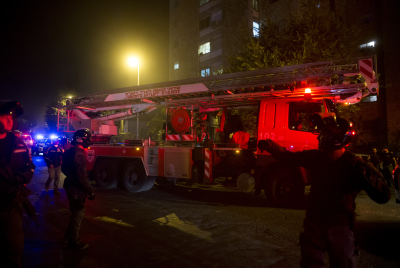 Two teenagers were in a Tzfas hospital Sunday morning in serious condition, being treated for smoke inhalation and injuries as a result of a fire that broke out in the hotel where they were staying. Dozens of firefighters and rescue workers converged on the Metsudah Hotel, where over 35 people had to be rescued after being trapped in their rooms.

A total of 16 were members of a teen tour group who were treated on site and later taken to Ziv Hospital in Tzfas. Of the 16, two were in serious condition, and 14 were in moderate or light condition. One of those treated was an infant, officials said.

The fire was first reported early Sunday, when staff noticed smoke in the lobby, where the fire apparently started. Firefighters found that the flames had spread to two floors above the lobby by the time they got there. The fire was brought under control about an hour later. Investigators have begun efforts to determine the cause of the fire.

Volunteers from Ichud Hatzalah, along with firefighters, worked to evacuate members of the group, as temperatures were near-freezing outside. Many of the members of the group were blockaded in their rooms, unable to leave because of the flames. Rescue workers set up ladders for guests to climb down, and in some cases had them jump out of windows onto nets, because the hallways and stairways were impassable due to fire and smoke.