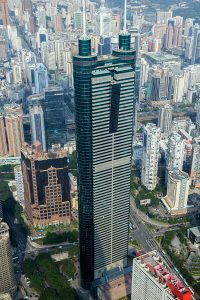 A view of the Shun Hing Square in Shenzhen, China. The 1,260-foot skyscraper was built at a rate of four floors every nine days. Soon 6,000 Chinese construction workers will be bringing their building skills to Israel. (Kyman Cheng)Israel and China have reached agreement on the importation of some 6,000 skilled construction workers within the next six months and an overall quota of 20,000, according to media reports.

After frustrating negotiations that dragged on for 18 months, the two countries finalized the text of an agreement in Beijing on Wednesday. Finance Minister Moshe Kahlon said that the accord, to be formally signed at the end of February in Yerushalayim, will help to provide some relief for the housing crisis.

“The Chinese workers will reduce the construction time, and bring down prices for the benefit of the public,” predicted Housing and Construction Minister Yoav Galant.

The Finance Ministry issued a statement saying that one of the main goals of the agreement was to eliminate brokerage fees and the possibility of human trafficking. The agreement is designed to ensure supervision of the entire process from the time the workers depart China, until they leave Israel at the end of the term of their employment.

Unlike agreements signed with Eastern European countries, this agreement stipulates that the Chinese authorities will be responsible for selecting the workers sent to Israel through special companies established for this purpose. In Eastern Europe, representatives of the Israeli government had responsibility for this key task.

Commenting on the agreement, Ministry of the Interior Rabbi Aryeh Deri said, “We have been negotiating with the Chinese government for a long time. Signing this agreement is a big step forward for the entire construction industry, and will help supervise and control the employment of construction workers from China. Above all, the dismal phenomenon of unreasonable mediation fees paid by those coming to Israel to work has been stopped.”