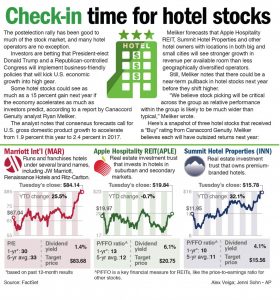 Donald Trump’s election as president has made many small business owners more upbeat about 2017.

Dean Bingham says he’s cautiously optimistic because business picked up at his auto repair shop after the election — people who had put off fixing their cars have decided it’s time to get them serviced.

“Over the last month, customers have been coming in with optimism that they didn’t have the last few years,” says Bingham, owner of a Mr. Transmission/Milex franchise in Greenville, South Carolina.

The shop has been so busy Bingham’s looking to hire a seventh employee to help out in the front while he works on cars.

While many business owners are more confident because their revenue looks to increase in 2017 due to the overall improving economy, they’re also optimistic because they expect Trump to deliver on promises to lower taxes and roll back regulations including parts of the health care law. But owners may not be expecting overnight relief — many recognize it will take time to see what the administration’s plans are, and what it will accomplish.

Business owners were considerably more optimistic about 2017 in a survey taken shortly after the election. Forty-six percent of the 600 questioned in the Wells Fargo survey said the operating environment for their companies would improve next year; that compares to 30 percent two years ago, after the last congressional elections. Just over half the owners said actions that Trump and Congress will take next year will make their companies better off. Twenty-six percent said the government’s actions would have no effect, and 17 percent said their businesses would be worse off.

Some companies that cater to other small businesses see the hopefulness in their customers, and it’s infectious.

“The election does give me more optimism than I would have had otherwise,” says Kurt Steckel, CEO of Bison Analytics, which does software consulting. Bison’s inquiries from prospective clients, small companies that are looking to expand, have nearly doubled since the election.

Steckel is also upbeat about an overhaul of the health care law. He says the cost of his small group insurance rose sharply when the law went into effect, and he had to stop offering coverage to his 10 staffers. He says if insurance were to become more affordable, he’d restore coverage.

Among the other laws and regulations that small business advocacy groups want to see eliminated or changed are the Department of Labor’s overtime rules that were scheduled to go into effect Dec. 1, but were put on hold by a federal court in Texas. Trump’s nominee for labor secretary, fast-food company CEO Andy Puzder, opposes the regulations.

“The decision to appoint Puzder as labor secretary is a big indication that there’s going to be a significant rollback of Obama administration initiatives,” says James Hammerschmidt, a labor and business lawyer with the firm Paley Rothman in Bethesda, Maryland.

Federal laws and regulations are only part of the requirements that small businesses must comply with — state and local governments in some parts of the country have more stringent laws and rules. For example, while the federal minimum wage is $7.25 an hour, many states and some cities have a higher minimum, with plans to raise it to as much as $15.

Many owners may be cautious in the first half of 2017 while they wait to see what the government does, particularly with health care, says Walt Jones, owner of a management consulting business, SEQ Advisory Group, whose clients include small companies. He also expects owners who do business with the government wait to see if federal agencies increase the number of contracts they award to small companies.

Jones is optimistic that Trump’s pledge to improve the country’s roads and other parts of its infrastructure will mean more government contracts, and in turn, more business for his company.

“As long as the administration sticks to the promises he (Trump) made during the campaign, I definitely see opportunities for small businesses,” Jones says.