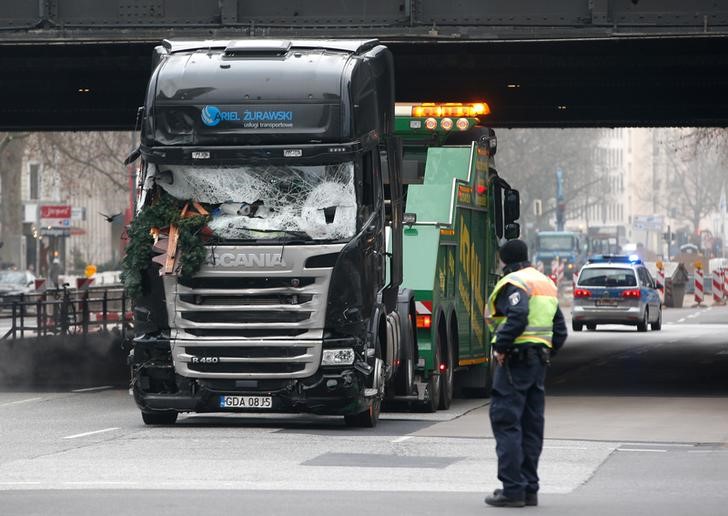 German police are looking for a Tunisian man after finding an identity document under the driver’s seat of the truck that plowed into a busy Berlin market, killing 12 people, on Monday evening, security sources said.

The document was in the name of Anis A., born in the southern city of Tataouine in 1992, the sources said, using a convention whereby suspects are identified by their first name and initial. The man was also believed to use false names.

A spokesperson for Tunisia’s foreign ministry said it was trying to verify the information. Daily newspaper Bild reported the man was known to police as a possibly dangerous individual, and part of a large Islamist network.

The carnage at a symbolic Berlin site has shocked Germans and prompted security reviews across Europe, already on high alert after attacks this year in Belgium and France.

The possible – though unproven – involvement of a migrant or refugee has revived a bitter debate about security and immigration, with Chancellor Angela Merkel facing calls to clamp down after allowing more than a million newcomers into Germany in the past two years.

Merkel, who will run for a fourth term next year, has said it would be particularly repulsive if a refugee seeking protection in Germany was the perpetrator.

Police initially arrested a Pakistani asylum-seeker near the scene, but released him without charge on Tuesday. Authorities have warned that the attacker is on the run and may be armed. It is not clear if the perpetrator was acting alone or with others.

The 25-ton truck, belonging to a Polish freight company, smashed into wooden huts in the market, injuring about 45 people.

The Polish driver of the hijacked truck was found shot dead in the cabin of the vehicle. Bild reported that he was alive until the attack took place.

It quoted an investigator as saying there must have been a struggle with the attacker, who may have been injured.

Islamic State has claimed responsibility, as it did for a similar attack in July when a Tunisian-born man rammed a truck through a crowd celebrating Bastille Day in the French city of Nice. Eighty-six people were killed, and the driver was shot dead by police.

The head of the Association of German Criminal Detectives, Andre Schulz, told German media late on Tuesday that police hoped to make another arrest soon.

“I am relatively confident that we will perhaps tomorrow or in the near future be able to present a new suspect,” he said.

Police arrested another suspect in the early hours of Wednesday morning but later released him, broadcaster rbb reported.

“We want to raise the police presence […] We will have more patrols. Officers will have machine guns. We want to make access to markets more difficult, with vehicles parked across them,” Bouillon told the paper.

Some politicians have blamed Merkel’s open-door migrant policy for making such attacks more likely. The anti-immigrant Alternative for Germany (AfD), which has gained support in the last two years as the chancellor’s popularity has waned, said on Tuesday that Germany is no longer safe.

Bavarian Interior Minister Joachim Herrmann told German radio there was a higher risk of Islamist attacks because of the influx of migrants in the past two years, many of whom have fled countries such as Syria, Iraq and Afghanistan.

The task of tracking the suspects and the movements of the truck may be complicated by the relative scarcity of security cameras in public places in Germany, compared with similar countries like Britain.

The German cabinet on Wednesday approved a draft law to broaden video surveillance in public and commercial areas, a move agreed by parties last month after a spate of violent attacks.

State surveillance is a sensitive issue in Germany because of extensive snooping by the Stasi secret police in Communist East Germany and by the Gestapo in the Nazi era.