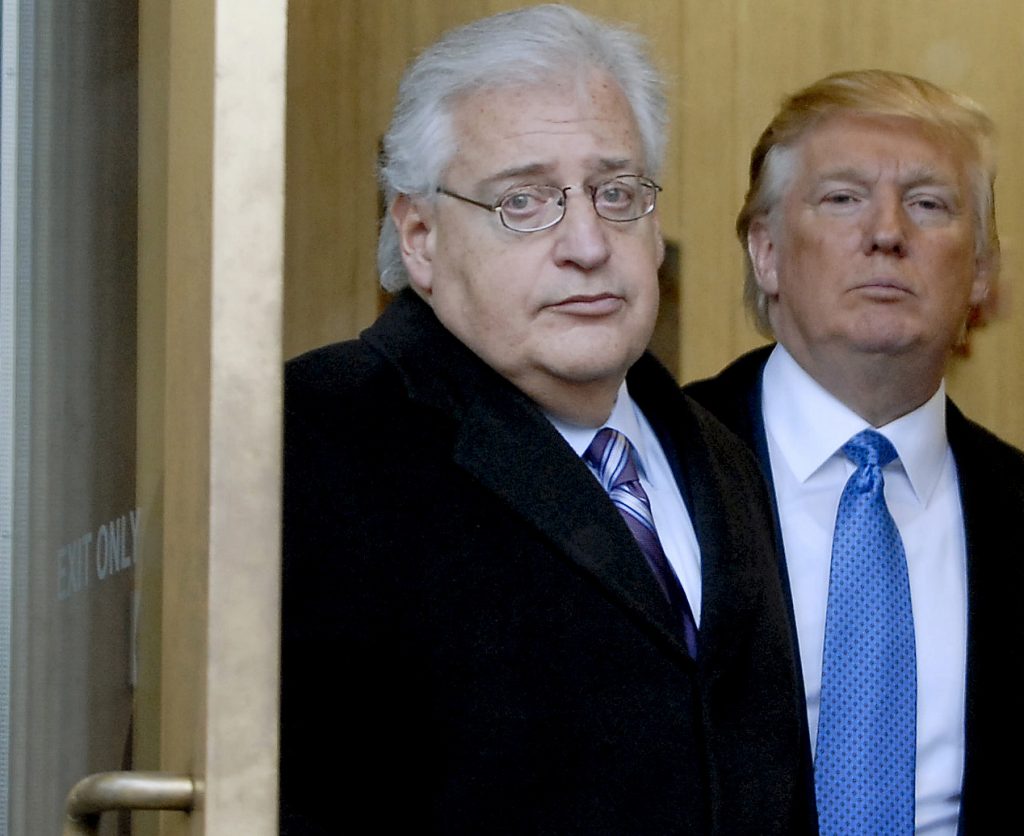 Sources close to Binyamin Netanyahu said that the prime minister was “pleased” with the choice of David Friedman as the next American ambassador to Israel. The sources, quoted in Haaretz, said that “Netanyahu knows that President-elect Donald Trump places great trust in Friedman, who is a very close adviser of his.”

Trump’s staff announced last week that Friedman, a strong advocate of Israel and on the right of nearly every issue involving Israel, was to be the new U.S. ambassador. In a statement, Friedman said that he welcomed the task, and looked forward to carrying out his assignment in “Jerusalem, the eternal capital of the Jewish people.” A Trump spokesperson had already said earlier that the president-elect took the idea of moving the embassy to Yerushalayim “very seriously.”

In an interview on the day after the election, Friedman, an attorney who has worked with President-elect Donald Trump for decades and during the campaign advised him on Israel and Jewish affairs, told Army Radio that “Israel will have an extraordinarily good friend in the White House, one who will treat Israel with love and respect, and one who appreciates the miracle of Israel. It will be a very welcome change from the past eight years.”

Leftist groups slammed the choice. Far-left group J Street — whom Friedman has termed “worse than kapos” for their work against the Israeli government — said that Friedman, “a leading American friend and funder of the settlement movement, lacks any diplomatic or policy credentials and has attacked fellow Jews and public figures with hateful accusations that are disqualifying for representing our country in any capacity.”

The appointment “shows breathtaking disdain for the vast majority of American Jews who support the two-state solution, progress toward peace with the Palestinians and common decency in public discourse. Senators should know that the majority of Jewish Americans oppose the views and the values that this nominee represents, and that his confirmation to serve in this position would undermine the core values underlying the U.S.-Israel relationship and endanger both American and Israeli interests.”

Zionist Camp head Yitzchak Herzog said that “Israel must not interfere in the appointment process in the U.S., but I would expect that the new ambassador would recognize that Israel is not prepared to annex 3 million Palestinians, but would prefer to separate from them, and that the two-state solution is the only path to peace. He will have to learn this thoroughly.”