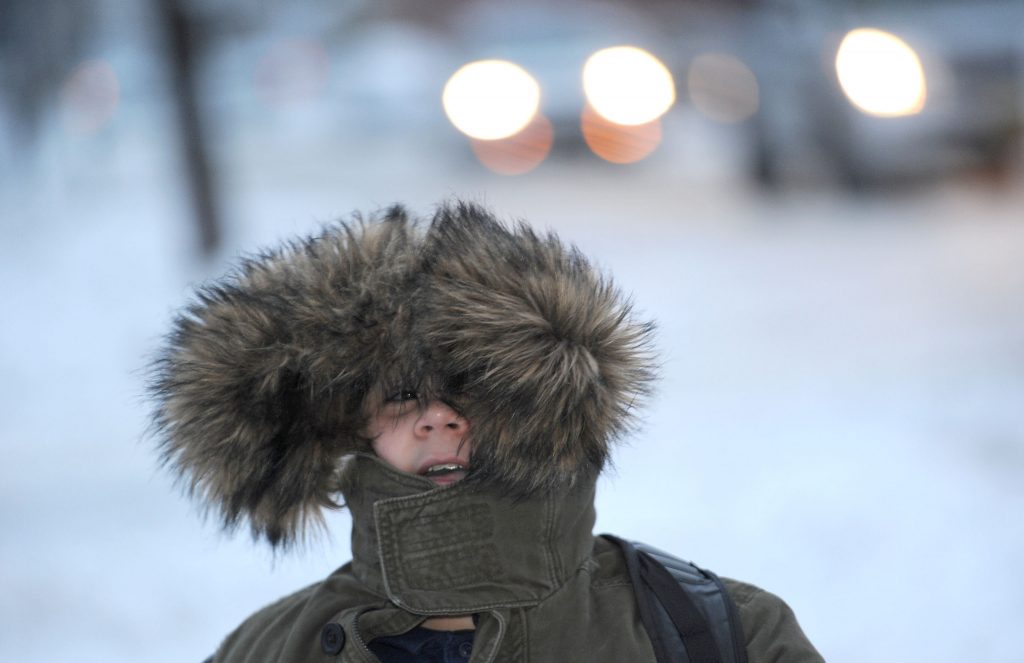 Low temperatures and high winds have put the Northeastern U.S. in a deep freeze.

Dangerous wind chills of 20 to 30 below zero in parts of the region made for some crippling conditions Friday.

“You are talking about 30 degrees below normal highs. That is pretty darn cold,” said National Weather Service meteorologist James Brown in Maine. “This is pretty much a piece of Arctic air that came off the North Pole and came into New England.”

Forecasters said a storm will follow the frigid weather, bringing chances for snow, sleet and freezing rain across much of the country.

Some schools closed early Thursday and many others delayed opening Friday to avoid a bone-chilling wait at the bus stop.

“We’re not strangers to these sorts of bitter temperatures on Mount Washington’s summit,” senior weather observer Mike Carmon said in the weather observatory’s blog at the highest peak in the Northeast. “However, over the last few winters, it’s generally late January or February before we experience this sort of polar air outbreak.”

The wind chill was down to 85-below at the summit early Friday.

Utility workers were prepared for power outages due to fallen trees. David Flener, field safety manager at Eversource, New Hampshire’s largest utility, said workers are well-educated on how to stay warm in the coldest weather, starting before they even arrive on a job site. They are urged to make sure they carry an emergency kit with clothing and food in case they get stranded, and once they arrive, there is a discussion about on-the-job safety.

“We’re oftentimes up in buckets, so you’re sometimes above the trees and there’s a little more wind up there,” he said. “You’d be surprised how much heat you lose from the top of your head.”

Sara Sankowich, who oversees tree crews for Unitil, said workers are encouraged to watch out for one another to see if they show signs of hypothermia or frostbite. “We’ll take every step to make sure they are staying safe out there and that they’re not overexposing themselves to the elements,” she said.

In upstate New York, along the Lake Ontario shore, wind gusts approached 70 mph and the National Weather Service issued a blizzard warning effective through early Friday morning. Lake-effect snow was accompanied by winds of up to 50 mph, causing whiteout conditions in some places.

In western Pennsylvania, lake-effect snow bands were blamed for slick roads and poor visibility. Fifty-nine vehicles crashed in a snowy pileup and three people were hurt. The crash was one of three that shut down different stretches of Interstate 80.

Below-normal temperatures are expected this weekend and into Monday across the entire northern half of the country, from the Pacific Northwest to Maine and as far south as Oklahoma, Arkansas and Virginia, according to the Climate Prediction Center.

The Oklahoma Highway Patrol reported the fatal crashes on three interstates in the metro area Thursday night. The Oklahoma City Fire Department says its crews responded to multiple wrecks, including an eight-vehicle pileup that shut down traffic.

Up to half a foot of snow could fall from the Upper Mississippi Valley to the Northeast on Friday and Saturday, and areas east of the Appalachian Mountains could see freezing rain and sleet on Saturday.