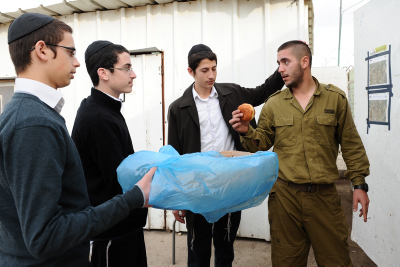 Among five solders who are being disciplined for accepting what the IDF said were “inappropriate gifts” during the course of their service at IDF checkpoints was one female soldier who, according to a report on Israel Radio, “crossed a red line when she accepted food from civilians” – in her case, a jelly donut (sufganiya) distributed by Chabad chassidim in honor of Chanukah.

The IDF has been cracking down on soldiers at the checkpoints, who have been accused of receiving bribes, both in cash and kind, in order to look the other way or actively assist Palestinian Authority Arabs to enter Israel for work and other purposes. The assistance does not extend to individuals who have no “case” and show up without papers at all, but involves allowing farmers to cross the security fence to get to their land inside the green line or inside a settlement at off-hours, among other things.

Another issue that the army has been cracking down on are gifts of food, drinks, sweaters, socks, and other items by Jewish residents of Judea and Samaria who pass through the checkpoints. The IDF does not want soldiers accepting such gifts for fear that they will develop relationships with the residents, preferring to keep everything on a “professional” level.

Caught up in a sweep of those latter offenders was the soldier in question, Israel Radio reported, whose “crime” was accepting the donut from Chabad chassidim who light giant menorahs at the checkpoints each night of Chanukah. Under questioning, the soldier admitting taking the “bribe,” with the resultant penalty – seven days in the brig.

Soldiers on checkpoint duty have long complained of the arcane rules about accepting gifts from Israeli drivers, saying that being posted for 12 hours without a break or supplies was an impossible task. “It isn’t right or fair to place us for long hours at the checkpoints to check cars and reject a snack or drink of soda offered by passengers or drivers,” the report quoted soldiers as saying. In response, the IDF said that it provided all the supplies needed by soldiers at the checkpoints, and that there was no need to accept gifts.